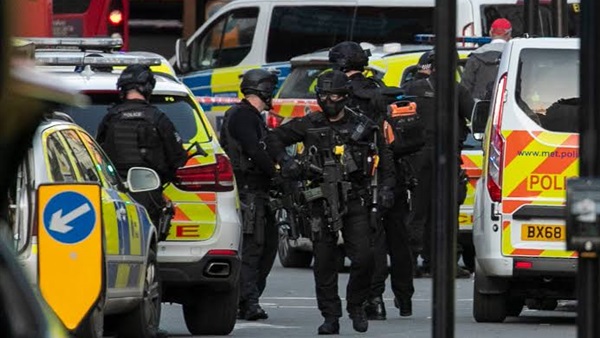 ISIS has issued a chilling new threat with an image of a rocket launcher being fired at Big Ben.

The picture follows an attack on London Bridge last week that left two dead and for which the terror group claimed responsibility.

It shows Big Ben and Westminster Bridge lit up at night while a man looks through the sight of a mounted rocket launcher from the opposite bank of the River Thames.

It echoes a similar image released in June depicting an explosion from the side of Big Ben while a man stands in the foreground with a rocket launcher on his shoulder.

Another image released at the time showed a US soldier running from Manhattan Bridge in New York city after a terror attack.

The attack began in Fishmongers Hall, which sits on the northern side of London Bridge, at an event hosted by the University of Cambridge, later spilling out onto the street.

Khan, wearing a fake suicide vest at the time, was tackled and restrained by members of the public until armed police arrived.

ISIS claimed responsibility for the attack that evening, saying Khan had been "responding to calls to target the nationals of Coalition countries", though is yet to provide evidence it played any actual role in the plot.

The attack was the first one carried out in the UK by an Islamist since another on London Bridge in June 2017, which saw three men drive a van into pedestrians on the bridge before stabbing people in the pubs around Borough Market.

The previous month had seen a 22-year-old blow himself up at Manchester Arena during a concert by pop singer Ariana Grande.

A total of 22 people were killed and 139 were injured, many of them children and teenagers.

That March also saw five people killed, including a parliamentary police officer, in another van attack on Westminster Bridge.