ISIS has not been defeated, head of Britain's Armed Forces warns 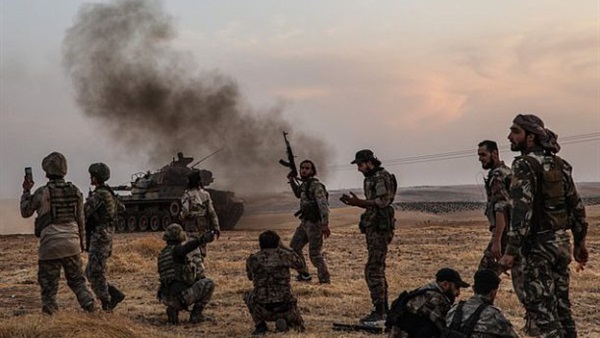 The terrorism threat has 'proliferated' and migration is set to rise significantly, the head of the Armed Forces warned last night.

In his annual speech at the Royal United Services Institute, the 60-year-old also said Syria had become a 'tinder box' that could very easily ignite.

He warned of conflicts between different armed groups, such as Russian mercenaries in the war zone.

He said: 'Daesh [IS], and the extremist ideas it represents, has absolutely not been defeated – indeed the threat from terrorism has proliferated – as was sadly demonstrated once again in last Friday's attack at London Bridge.'

In this new age, authoritarian opponents are attacking Britain's 'way of life and our freedom in a manner that is remarkably difficult to defeat without undermining the very freedoms we want to protect'.

General Carter said the risk of 'grey' area warfare was 'unwarranted escalation leading to miscalculation', saying the Syria conflict was a case in point.

He said there were more than 1,000 armed groups fighting in Syria, adding: Of course, these different actors all have very different agendas. This is a tinder box that could easily ignite a wider conflagration.

Thousands of members of IS are believed to remain in Syria and Iraq, with many having fled to other unstable states.

Thousands also remain in prisons across the region, raising fears further conflict could lead to their release and a resurgent terror group.

'Poor governance, conflict, parlous economic growth and climate change suggest that population displacement and migration will increase significantly from the relatively small numbers we have seen so far,' he said.

'And, of course, none of this is helped by great power competition and a new scramble for Africa's resources.'

Britain is in a period of 'phenomenal change – more widespread, rapid and profound than humanity has experienced outside of world war', General Carter said.

He said it was 'more sustained than the two world wars of the last century combined – and it is still increasing'.