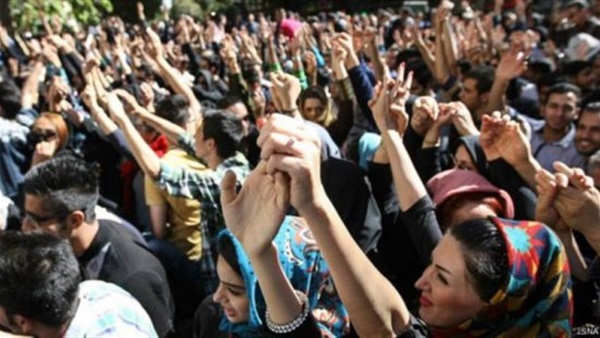 There have been ongoing violations by the Iranian regime against non-Persian peoples, which has led to the anger of these ethnicities because of the deprivation of their most basic rights, especially the blurring of their identity and trying to dissolve them within Persian identity.

In light of the recent escalation between the United States and Iran, the fragmentation of the home front poses the most difficult challenge to the mullah regime, especially in light of the increasing American pressure. This challenge, which the Iranian regime is aware of, prompted President Hassan Rouhani to demand that the country’s political factions overcome what he described as "difficult circumstances". This came after the United States sent an amphibious assault ship and Patriot missile batteries to the Middle East to strengthen the capabilities of the aircraft carrier and B-52 bombers previously sent to the Gulf region.

The US escalation also prompted Rouhani to reaffirm the need for unity to overcome the conditions, which he said may be more difficult than the conditions during the war with Iraq in the 1980s, at a time when the state is facing tightening US sanctions.

Rouhani stressed that the current conditions are harder than the period of the 1980-1988 war with Iraq, pointing out that during the war there were no problems with banks, oil sales, or imports and exports, and there were only sanctions on arms purchases. "The pressure of the enemies is an unprecedented war in the history of our revolution," he said.

The number of non-Persian peoples in Iran is a difficult figure for the Iranian regime. Statistics show that the population of Iran is about 81 million people, of which the Persian ethnicity makes up about 52%, while the other ethnicities reach about 48%, including up to 24% Azeri and up to 8% Gilak and Mazanderani.

According to statistics of non-Persian peoples, the Kurdish ethnicity constitutes 7% of Iran’s total population, while Arabs reach 3%, Balochs 2%, Lurs 2% and Turkmens 2%, while other minorities constitute 1%.

According to these percentages, the number of these ethnicities amounts to nearly half of the population of the country, which represents a great challenge for the regime, especially in light of the violations experienced by the majority of these ethnicities, who have become fiercely opposed to the survival of the regime.

Indications of the collapse of the home front did not stop at the limits of political differences or objections to the policies of the current regime, but have evolved to the extent of carrying out armed operations against the Iranian security services, especially the Revolutionary Guards, which the regime considers to be its big stick to discipline opponents.

Successive operations carried out against the Iranian regime have confused its calculations, especially as these operations led to the reduction of the prestige of the regime after suffering significant losses, as happened in the September 2018 attack carried out by the Ahvazi Resistance Movement against a military parade, which killed 29 people, mostly of the Revolutionary Guards, as well as injured about 60 others.

According to the statements of Ahvazi leaders at the time, the National Resistance Organization of Ahvaz, which includes a number of armed factions, claimed responsibility for the attack, which confused the ranks of the Revolutionary Guards and revealed the high combat capability of the armed movements affiliated with non-Persian peoples.

Shortly after the attack, the regime suffered another operation that again confused its calculations. In October 2018, the Baloch Jaish al-Adl (Army of Justice) announced capturing more than 15 members of the Iranian Revolutionary Guards in the Baloch region of Mirjaveh. Baloch officials asserted that the operation, which they described as "heroic," was carried out by Jaish al-Adl in response to the oppression, persecution and racial discrimination practiced against the Baloch people and the Sunnis in Iran's political territory, noting that there is no option for the Baloch except to resist until the defeat of the Iranian occupier.

The operation carried out by the Balochs revealed the weakness of the Iranian security services, especially after the Iranian news agencies acknowledged the operation and noted that the captured elements were members of the Revolutionary Guards.

Since the beginning of the 2017 protests against the Iranian regime, non-Persian peoples have represented a difficult number in these protests, especially the Arabs in Ahvaz province. Despite the regime's severe repression of protesters, the abuses against these ethnicities led them to continue protesting and calling for the overthrow of the regime, which has denied them the most basic rights for 40 years.

Despite the assassination of the figures of these ethnicities at home and abroad and the monitoring of terrorist operations planned by the Iranian regime against them in European countries, these movements have not been discouraged from holding events and conferences on an ongoing basis to denounce the regime's practices, convey the suffering of the Iranian street to the international community, and demand the international community stand by these ethnicities so they obtain their rights.

Isolation from the Persians

According to statements of the leaders of these movements, the non-Persian peoples, represented by the Ahvazi Arab, Azeri, Kurdish and Baloch peoples, have isolated their fate from the fate of the Iranian regime and the Iranian state as a whole since the establishment of the modern Iranian state in the first quarter of the 20th century and its gradual occupation of these peoples.

The leaders of these movements believe that, since its occupation of these ethnic territories, the Iranian regime has been practicing gradual ethnic cleansing against the non-Persian peoples through killing, execution and displacement. Therefore, these peoples support any international movement to end the threat of the Iranian regime and the Iranian state in general.

Finally, it seems that the movements of non-Persian peoples are working to communicate with the international community, cooperate with the parties affected by the mullah regime in Tehran, fully coordinate with the other non-Persian peoples, and finally work with states and regional institutions for one goal: to overthrow the regime. This is the most difficult challenge.