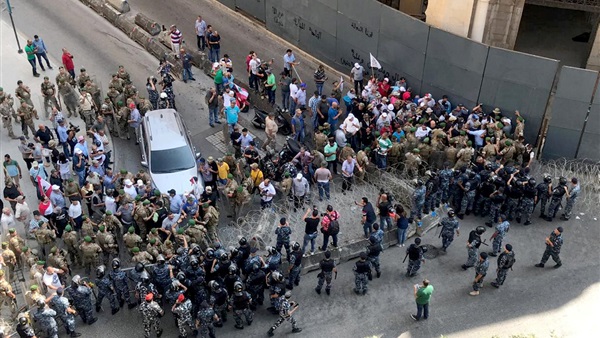 The security forces have succeeded in opening all the blocked roads across Lebanon, according to an Al Arabiya correspondent.

Clashes and road blocks continued into Thursday morning in various parts of Lebanon as the protests near their 50th day.

Earlier in the south, demonstrators blocked the main entrance to Nabatieh’s vehicle registration department and demanded it be shut down, reported the NNA.

Employees and demonstrators clashed when the employees refused to disrupt the business and interests of the citizens.

Meanwhile in Sidon, a group of protesters, mostly school students, marched from Elia Square to public facilities to shut them down, starting with Electricite du Liban, telecommunications company Ogero as well as a number of banks, while another group headed to the public market of Sidon to close the shops. Shop owners re-opened their shops after closing for two hours at the request of the protesters. Others held demonstrations in front of the Lebanese University and the LIU in order to interrupt their studies and encourage the others to join the demonstrations.

There were also major traffic delays in downtown Beirut due to the Ring Bridge being blocked by demonstrators once again Thursday morning. It was later opened by anti-riot police. Many clashes have taken place in this area since the start of the demonstrations, including clashes when Lebanon's Hezbollah and Amal supporters attacked protesters.

According to Al Arabiya sources, it is expected that the protests will continue and possibly escalate due to people objecting the nomination of Samir Khatib for the prime minister position.

Lebanon has been in political deadlock since Saad Hariri resigned as prime minister in late October.