Blocked roads then bullets: Iran's brutal crackdown in its City of Roses 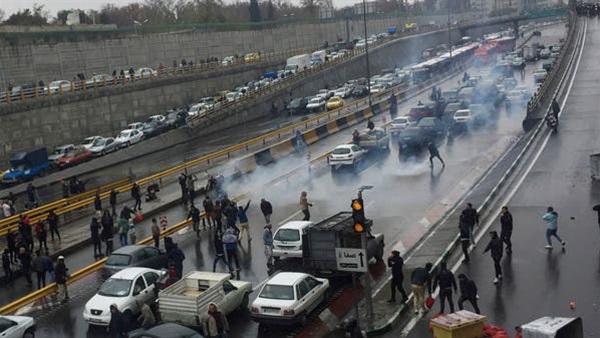 What are you scared of?” the woman in the black coat shouts. “Help me to understand.” She marches up to a man in uniform guarding the petrol station. “You’re ruining us,” she screams, as the man walks away.

The exchange comes from footage taken around 1am on Friday 15 November in the south-central Iranian city of Shiraz. Hours earlier, in a surprise announcement, Iran’s government had said it was raising the price of fuel by up to three times, adding to the strain on a population already struggling with an economy suffocated by US sanctions.

“What are you scared of?” the woman in the black coat shouts. “Help me to understand.” She marches up to a man in uniform guarding the petrol station. “You’re ruining us,” she screams, as the man walks away.

The exchange comes from footage taken around 1am on Friday 15 November in the south-central Iranian city of Shiraz. Hours earlier, in a surprise announcement, Iran’s government had said it was raising the price of fuel by up to three times, adding to the strain on a population already struggling with an economy suffocated by US sanctions.

The petrol-price hike would trigger what may have been the largest-scale unrest in the 40-year history of the Islamic Republic. Iranian officials this week estimated 200,000 people were involved in the protests and riots which led to 7,000 arrests and, by some estimates, the regime’s deadliest-ever response to demonstrations. Amnesty International have confirmed 15 deaths in Shiraz; those on the ground say the toll is much higher.

Like the rest of Iran, Shiraz was cut off from the world by an unprecedented five-day internet blackout. Precisely what transpired in the heartland of Persian culture known as the City of Roses is still unclear.

But interviews with activists inside and outside Shiraz, as well as analysis of social media posts, give a glimpse of what is thought to have been one of the largest protest outbreaks in the country, incurring one of the highest known death tolls.

By Saturday morning, people were heeding the woman and others calling for mass civil disobedience. At least one major road in Shiraz had become a parking lot. “People are protesting and have blocked the streets completely,” says a voice, surveying the sea of cars in both directions in an industrial area of the city. Drivers gather in groups outside their cars, chatting. The vehicles curve along the palm-lined road to the edge of the frame.

As the day went on, protesters were pouring into the streets of outer-lying areas across the city, according to activists. Social media footage shows significant unrest in at least six spots. The two most prominent incidents were in the suburb of Sadra and on Maliabad Boulevard, a long thoroughfare of banks and retailers that cuts across northern Shiraz.

The rallies were peaceful, and at first, so was the state response. Footage shows demonstrators applauding as police in riot gear are handed flowers. Protesters say they sat in groups on the road, chanting and playing cards.

Later, a protester would record a voice message to the US-based Iranian activist Masih Alinejad, reflecting on the morning. “Everything was going well and people were all smiling and happy,” he said. “I saw people giving roses to the police, the first days was very peaceful and it was all good. Even the police were fine.”

It did not last. Footage that activists believe was shot on Maliabad Boulevard the same day appears to show security personnel charging through crowds, sending people fleeing. Clouds of what appears to be tear gas can be seen forming.

There also appears to have been rioting: a video said to have been shot in the city shows fires burning in several spots, a handful of shops gutted, and the road scattered with paper and debris.

“The youth has no future in this country with these thieves in power,” a protester tells Alinejad in a voice recording heard by the Guardian. “They couldn’t take it anymore and they were full of rage. They took things to another level.”

“Things started to escalate when the police started to beat people up. We had to make our weapons to defend ourselves and that was it. It was all because we had to defend our lives.”

The protesters, including many from working-class neighbourhoods, brawled with security personnel in some areas, using nails pushed through bottle caps as makeshift spikes to puncture the tyres of police motorcycles and cars.

At some point that afternoon, the police started shooting. Activists have posted footage from Saturday that shows gunshots going off near a Maliabad Boulevard police station.

“This is Shiraz and the armed forces are firing at the people,” says a man filming outside the police station in another clip. He pushes his way through a chanting crowd, who surround a bloodied man on the ground. It is Mehdi Nekouyee, 20, the first person confirmed to have been killed in Shiraz’s protests.

Because the internet was cut, Nekouyee’s family overseas first learned of his death when someone inside Iran wished them condolences on social media. “[Mehdi] was quiet, very open minded,” his uncle remembers. “He wanted freedom, freedom of speech.”

Nekouyee’s killing enraged the demonstrators. Activists say the protesters began to hurl rocks at the police station, tearing at its fence. By Saturday evening, the building was said to be alight.

“They were firing live rounds and tear gas, but people were really courageous and did whatever it took,” a man’s voice said in another recorded message sent to Alinejad. “We asked the people who were burning things [to stop], we don’t know who they are, but people are full of rage and no one could stop them.

“It is really bad and everyone is running for their lives, and the armed forces have no mercy and I couldn’t believe they were people from the same homeland … It was a violence that I’ve never seen before.”

Throughout Saturday and the next day, demonstrations were erupting in different parts of the city. Golshan, a suburb in Shiraz’s north-west that is home to many members of the Qashqai minority group, became “a war zone”, one activist with contacts in the city said. “Security forces entered with heavy weapons and helicopters.” All roads into the area were closed from Saturday until the following Tuesday, he said.

Protesters appear to have remained in control of Sadra for most of the weekend. On Sunday 17 November, demonstrators appear to have set fire to the office of the senior imam in the area, a direct attack on the country’s clerical establishment.

Activists say the response to the arson was swift and included helicopters swooping over the crowds, firing bullets and tear gas, a tactic reported in several areas and filmed in Sadra.

Ruhallah Gashgaei, an activist with links inside Shiraz, said an accurate death toll was still impossible to ascertain, but the average of several independent eyewitness accounts was that 60 were killed across Shiraz and an additional nine died in the suburb of Sadra. More information would emerge as different parts of the city were brought online, he said.

By Monday 18 November, the regime appeared to have retaken control of most of Shiraz. Images taken last Sunday and sent to the Guardian showed the city still scarred by the conflict, littered with debris and burned out cars.

An activist in Shiraz estimated 80 bank branches and seven petrol stations had been set alight across the city. Police and Revolutionary Guards are carrying out raids of homes and hospital wards, arresting suspected protesters. The country’s supreme leader, Ali Khamenei, has blamed the unrest on a “deep, vast and very dangerous conspiracy” concocted by Iran’s enemies overseas.

“Last night Shiraz was under the control of Shiraz’s people,” said a protester in a voice message to Alinejad. “What [the authorities] say about controlling the situation is all nonsense. The weather changed and became very cold – even God is with these people [the regime].”

“Yes, we survived,” a woman says in one of the recorded messages. “I saw two people getting shot next to me. Since Monday there has been a military curfew, there are [paramilitary] Basij officers all over the place. They were really scared and with every slight sound they were reacting strangely.”

Activists estimate the death toll in Shiraz to number in the dozens, but have not yet been able to provide proof. An Amnesty International report this week increased its confirmed death count across the country to 143. The Iranian government rejects this figure but has not provided its own.

“Everyone took to the streets, I was really hopeful that things would change,” one of the recordings to Alinejad said. “For two days Shiraz was under the control of the people, but nothing bad happened. There was complete peace. It was such a great thing that people had the control over the city. I could see how the country would look like if we take power.”