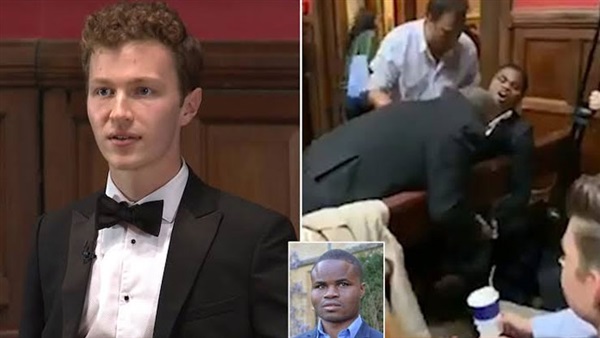 The president of the Oxford Union has bowed to pressure to resign after a blind student was dragged by his ankles from a debate event by a security guard.

Ebenezer Azamati, a postgraduate student from Ghana, was forcibly removed from the event last month when he tried to return to his seat before a debate.

Brendan McGrath, the president of the union, who had alleged that Azamati had behaved violently, accepted he “manifestly failed” in his duty to ensure that every member felt welcome.

In a resignation statement posted on the union’s Facebook account, McGrath apologised and said he was wrong to seen to be trying to blame Azamati in the aftermath of incident.

McGrath’s resignation came after the Oxford University Africa Society (OUAS) launched a petition calling for him to to go and impeachment procedures against him were started by union members. The OUAS said Azamati’s treatment was “violent, unjust, inhumane and shameful”.

Several other senior post holders at the union have already resigned over the incident, according to Cherwell, the university’s student magazine.

McGrath said he was advised to bring a disciplinary case against Azamati on behalf of the security guard involved but had failed to recognised the wider “institutional problems” highlighted by the incident.

“For all of my shortcomings, and all of my mistakes, I apologise profusely and unqualifiedly,” he added.

The president of the Oxford Union, a debating society that operates independently of the university, is one of the most sought-after positions at Oxford and frequently a springboard to high-profile political careers. Past presidents include Boris Johnson, Benazir Bhutto, Michael Foot, Tony Benn and Jeremy Thorpe.

The university said it shared widespread outrage at Azamati’s treatment.

In his resignation statement, McGrath also called for an independent review into the union’s policies on disability and a professional review of its security system and staff training.

Azamati, an international relations scholar, said his treatment left him feeling “unwelcome in the union, Oxford and even the country”.

He successfully appealed on Saturday against what he said were claims of “false violent disorder” by the union. The union withdrew its charge of violent misconduct against him and apologised “unreservedly”.

The society has hosted speakers and debates since 1823.