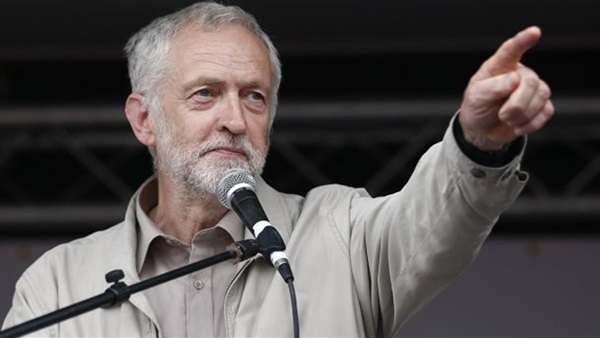 Our green industrial revolution means that tackling the climate crisis and reducing inequality can go hand in hand because the inequality that scars our society is not inevitable; it’s not an act of God or a law of physics.

It’s the result of deliberate government policy that has made us one of the most unequal countries in Europe both between the billionaires at the very top and everybody else and between the different parts of the UK.

This inequality is unsustainable and immoral. Ending it requires government action so that investment reaches all and people are supported to unlock their talents.

Corbyn claims the PM wants to hand over parts of the NHS to American companies under a trade deal with the US. He claims that this could lead to £500m a week handed over to US drug companies. Labour would legislate to stop this, he says.

(The £500m per week figure is not particularly plausible, because it is an extreme, worst-case scenario. This Channel 4 News FactCheck explains why.)

Corbyn says Labour supports the proposals in the CBI’s own manifesto for the election.

Contrary to what some people claim, Labour does not think the state can address all the problems facing the country without help from business, he says.

Corbyn says Labour will ask big businesses to pay their fair share of tax. And some services will be brought back into public ownership. But this is normal in many parts of Europe, he says.

The business tax cuts announced by the Conservative party overnight (see 11.02am) did not have a price tag attached, but they all seemed to involve a relatively small outlay from the exchequer. By comparison, the decision to abandon the proposed corporation tax cut does seem to amount to a big ticket spending announcement. Boris Johnson said it would raise £6bn for the NHS. It may be one of the biggest Tory election announcements we’ve had so far.

It is not hard to see why Johnson announced this, or even why he opted for the £6bn figure. This is the exact figure announced by Labour last week when it announced its own spending increase for the NHS. Here is an extract from the notes from the Labour press notice issued at the time. (Bold type in original.)

In other words, Johnson has neutralised the Labour bid to outspend the Tories on the NHS.

(At least, he has if his figures are accurate - at the moment we have had no detail of what is is proposing.)

In one sense this is a win for Labour; it shows that Jeremy Corbyn has been setting the agenda, and he just justifiably argue that this means the opposition is changing the policy of the governing parties.

But in campaign terms, this is a setback for Corbyn. At least one element of his distinctive pitch on the NHS has now been eliminated - even though there are still plenty of other differences been Labour and Tory health policy. (Spending totals aren’t everything.)

Johnson is broadening out his speech now to wider policy areas. The Tories would cut crime, he says, and invest in education.

Young people must be able to, literally, find work, he says. And that is why infrastructure is so important, he says.

He says, as well as focusing on big infrastructure projects, Johnson says he wants to focus on smaller transport projects too: better roads, better buses, more cycleways. He loves cycleways, he says.

He says, by doing this, government can create “the platform for growth”. And, if it does that, the market will respond, he says.

Johnson claims Jeremy Corbyn would be dependent on an alliance with the SNP.

And he says Corbyn’s position on the EU is “positively mind-boggling”.

He says it is still not clear whether or not Corbyn will campaign for the deal he will negotiate with the EU. Or, like Alec Guinness in the Bridge on the River Kwai, will he blow up the bridge he has himself constructed?