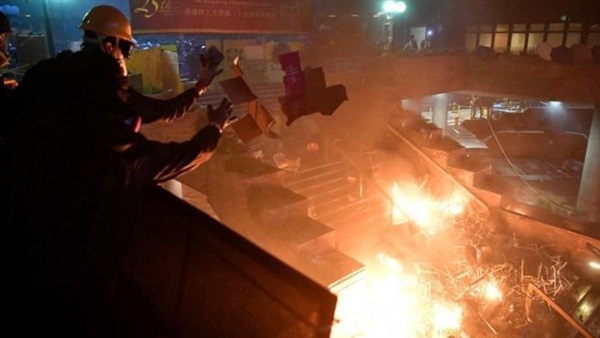 It is evening now in Hong Kong, and hundreds of activists remain besieged inside the Hong Kong Polytechnic University (PolyU), the site of intense clashes today between protesters — many trying to flee the campus after nearly a week inside — and the police determined to keep them holed up.

Hong Kong authorities have said the Red Cross is inside the campus and that those requiring hospitalisation will be permitted to leave.

As for the rest: “Other than coming out to surrender, I don’t see, at the moment, there is a viable option for them,” said Cheuk Hau-yip, regional commander of Kowloon West, in a press conference this evening.

Parents of some of those trapped inside PolyU, including around 100 secondary school students, are sitting down in front of the police cordon blocking access to the campus holding signs that read, “Save Our Kids”.

Protesters are clashing with law enforcement in other parts of the city, partly as a tactic to draw police resources away from the blockaded university, giving activists there a chance to escape. Activists claim some students have managed to get out of the campus through an unguarded path.

Administrators have warned the continued unrest might mean the postponement of district council elections scheduled for Sunday. That could further stoke the protesters, who see the polls as one of the few institutional mechanisms to voice their grievances and influence Hong Kong politics.

Earlier today, protesters won a legal victory with the high court finding a law against wearing masks in public was unconstitutional. Police say they have already stopped enforcing that controversial law.

In Tsim Sha Tsui, an area south of Hong Kong Polytechnic University, hundreds of protesters are facing off against riot police after having dug up bricks from the sidewalks and scattered them along the road. The longer the siege goes on at the university the more other places turn into flash points as protesters and their supporters rally and try to pull police resources away.

Hong Kong media is now reporting that district council elections may not be held this Sunday as scheduled because of the ongoing demonstrations, which included the arrest of 154 people on the weekend (bringing the total number of those arrested throughout the five-month movement to 4,491).

“However, the situation in the past weekend has obviously reduced the chance of holding the elections as scheduled and I’m very worried and anxious about this,” Nip said.

“I must say that postponing the election is a difficult decision to make and we will not take this step unless absolutely necessary.”

Cancelling elections is likely to make things much worse. Some protesters have been demanding that the government promise to hold the polls, seen as the last institutional venue people have for expressing their views.

Hong Kong’s protest movement has evolved throughout the five months it has raged in the harbour city. Its latest phase is taking place on Hong Kong’s university campuses — traditionally sites of political activism — some of which have been transformed into makeshift fortresses by demonstrators in the past fortnight.

The immediate trigger for the battle to shift to campuses appears to have been the 8 November death of a Hong Kong University of Science and Technology student. Since then, several campuses have been barricaded by students, some of who are using footbridges or or near the campuses to block major roads.

At least three campuses are currently blockaded, including most prominently the Hong Kong Polytechnic University, and an adjacent road leading to the cross-harbour tunnel — a key artery for traffic in the city, and one that authorities will be determined to re- open.

The campus confrontations have been desperate: activists are using petrol bombs, bamboo poles and other weapons including javelins and bows and arrows. Observers have told the Guardian the shift to campuses represents a major escalation. Many of those occupying the campuses are current students or alumni, and until recently, riot police have refrained from entering universities.

“The university is the home turf of the students,” Ho-Fung Hung, a professor in political economy at Johns Hopkins University, has told the Guardian. “There is this notion of academic freedom and the university as a bastion of free ideas, this notion of autonomy. To people, this should not be breached by authorities.”

There has been confusion throughout Monday about whether protesters will be allowed to leave the besieged university campus they have been occupying for the past few days. Earlier attempts to escape have been met with tear gas and arrest, prompting some of the protesters to retreat back inside.

Hong Kong police have just issued a statement saying the Red Cross has been allowed onto the campus and will be allowed to convey some students to hospital “if necessary”.

Police are aware of injuries inside Hong Kong Polytechnic University (PolyU) which has been struck by recurrent violence. Police attach great importance to the situation and have arranged for ambulances to convey injured people to hospital for treatment. This morning (November 18), Police started to make arrangement for Red Cross volunteers to enter the PolyU. At around 2pm [6am GMT], Red Cross volunteers arrived at PolyU to provide first aid to injured people, some of whom would be conveyed to hospital if necessary.