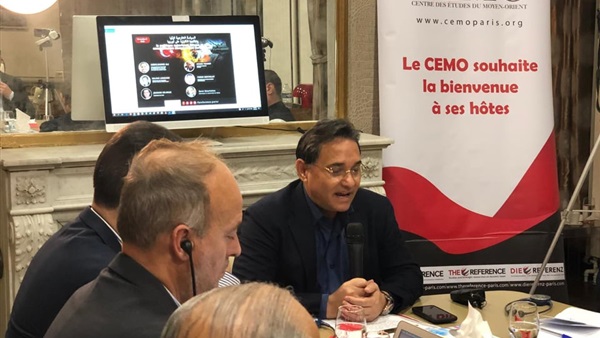 Soon after this, Erbakan founded a movement in Germany and gave it the same name. In 1995, the movement was called the Islamic Community of Milli Gorus.

This opened the door for the same movement to take root and grow throughout the whole of Europe. İt established branches in the Netherlands, Belgium, France, Austria and the United Kingdom. The movement owns and controls hundreds of mosques in the same countries.

The World Assembly of Muslim Youth, which is controlled by the Muslim Brotherhood, organized its first youth camp in northern Cyprus in 1970.

Kamal al-Helbawi, a member of the Egyptian branch of the Muslim Brotherhood, was one of the senior members of the assembly. He also oversaw the camp.

Helbawi wrote a secret report about the camp, in which he mentioned two Turkish youngmen. He described them as potential leaders. These two youngmen were Recep Tayyip Erdogan and Abdullah Gul.

From movement to party

Erbakan had been paving the road for political Islam to be in control since founding the Milli Gorus movement.

Erbakan did not despair. In 1983, he founded the Welfare Party. Nonetheless, the Turkish Constitutional Court banned this party because it violated the separation instituted in the constitution between religion and state.

Some of the members of the Welfare Party founded the Virtue Party, in late 1997, exactly when Erbakan, Erdogan and Gul were banned from politics. This party was barred by the Constitutional Court in 2001.

Divisions were clear between Erbakan, on one hand, and Erdogan and Gul, on the other. This amounted to a generational divide, especially when the three were allowed to go back to politics. Erbakan founded and headed the Felicity Party in 2001. Erdogan and Gul founded the Justice and Development Party in the same year.

Erbakan died in 2011. Nonetheless, the manifesto he wrote in the 1960s continued to be the ideological reference for the Justice and Development Party, later headed by Erdogan. Milli Gorus also derives its ideology from the same manifesto. Apart from Europe, the movement took root and grew in the United States and Australia.

Both Erdogan and Gul quit Milli Gorus against the background of disputes on the financial gains of the movement in Europe. In Germany alone, the moment earned a million Euros every month.

The US Embassy in Ankara described the members of the movement in a 2004 cable as "arrogant". The embassy said the members of Milli Gorus like to pit Islam against democracy and view the world as a "bunch of conspirators" against the Islamic religion.

In the same cable, the embassy described the members of the Justice and Development Party inside the movement as a minority that has no value without the party. Nevertheless, it added, these members are influential inside Turkey.

The US Embassy noted also that Gul was close to the movement as far as his way of thinking was concerned. It said Erdogan was a bit close to the center.

The army chief decided then to keep the Turkish army away from politics. In 2002, he said there would not be any military coups in Turkey if this was Europe's condition for Turkey to join the European Union. The service men used to say that they would stay away from politics in return for allowing Turkey to join the European Union, otherwise Islamists would rise to power in their country. Nevertheless, Europe and the US had apparently had a different vision.

Erdogan and the large coup

Erdogan made a radical change of course, both inside and outside Turkey, especially in 2007 when he headed the Justice and Development Party, the ruling party in Turkey now. Erdogan became the prime minister of Turkey. His friend, Gul, became the president of the country.

He quickly sent directives to Turkish embassies to strictly abide by the rules of the Islamic religion. In short, he wanted to Islamize these embassies. The members of Milli Gorus were given government posts. Some of them also owned companies in the West. These companies included the Turkish Airlines. Turkish embassies were also instructed to coordinate with Milli Gorus, including in Germany, the Netherlands, Austria, Belgium, and France.

Some ambassadors rejected these instructions and submitted their resignations. Others filed for political asylum in the countries where they worked.

At the religious level, the Directorate of Religious Affair turned into the main stronghold of political Islam inside Turkey. As of 2007, the movement started taking a different course because of the flow of a huge number of the members of Milli Gorus onto it. The mosques controlled by Milli Gorus and the directorate were almost the same. The two entities even decided the weekly Friday sermons in the same mosques.

The directorate then started controlling Turkish mosques and Turkish citizens outside Turkey. However, foreign governments did not know how to deal with the changes taking place inside the directorate. They boycotted Milli Gorus, not knowing that the directorate and Milli Gorus had become one and the same thing.

Some Muslim Brotherhood lawmakers and government officials travelled to obtain training in Turkey after the Muslim Brotherhood reached power in Egypt, following the 2011 uprising. What came to be known as the "Arab Spring" gave Erdogan hopes that his country could play a leading role in the Middle East. Consequently, he turned Istanbul into a meeting point for the members of the international organization of the Muslim Brotherhood. Organization agencies organized a large number of events in the Turkish city and hammered out agreements in it.

These agencies included the following:

·       The European Council for Fatwa and Research

·       The International Union of Muslim Scholars

·       The Federation of Islamic Organizations in Europe

The meetings organized in Istanbul gave the members of the international organization of the Muslim Brotherhood more freedom to express themselves. The meetings the same members held in Europe were always closely watched by European governments.

Plans were made for controlling Egypt and subsuming it under Erdogan's aspired caliphate. Turkish businessmen started flocking into Egypt, in preparation for a promising future.

A year later, however, their dreams evaporated when Egyptians rose up against Muslim Brotherhood president Mohamed Morsi. The Egyptian army took sides with the people, which brought an end to the Muslim Brotherhood rule of Egypt.

Syria as an alternative

Turkey then tried to find a foothold in Syria as an alternative to Egypt. Syria's Muslim Brotherhood had an office in Istanbul. Muslim Brotherhood members started making plans for Erdogan to have his own influence in Syria. Islamist leaders in Syrian cities like Hama, Aleppo and Homs also started preparations for receiving the arms they bought from the Balkans via Turkey. Arms also entered Libya through Turkey.

Erdogan turned his country into a safe refuge for the Egyptian members of the Muslim Brotherhood, who escaped from Egypt after the downfall of the Mohamed Morsi regime.

In Turkey, they were offered help to initiate several media platforms. They also utilized social media in their war against the Egyptian regime which became a stumbling block on Erdogan's road for controlling the region.

Turkey became a meeting point of the organizations affiliated to the international organization of the Muslim Brotherhood. The members of these organizations meet in Turkey to coordinate and plan for invading Europe.