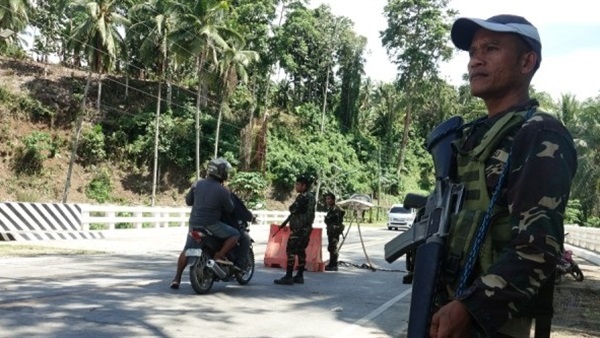 Soldiers in the southern Philippines foiled what the army said on Wednesday  (Nov 6) was an attempted suicide bombing in an urban area, the latest in a series of attacks blamed on a group aligned with Islamic State.

Troops manning a checkpoint on the island of Jolo engaged in a short gunfight with three men on a motorcycle late on Tuesday afternoon. The attackers were killed and bomb vests, a handgun, a grenade and detonators were seized, the military said.

The intended target was an urban area of Jolo, the island's capital, and two of the men were Egyptian, the regional armed forces command said in a statement.

The other man was Filipino and a member of Abu Sayyaf, a group that has pledged allegiance to Islamic State and is notorious for piracy and for kidnapping foreigners.

The incident would have been be the fifth attempted suicide bombing in the southern Philippines in the past 16 months. Such attacks were previously unheard of despite decades of separatist unrest and lawlessness that has given rise to extremist sentiments.

It marked a sinister turn in the Philippines' fight to contain militant groups inspired by Islamic State who have been joined by fighters from Malaysia and Indonesia, including in a brazen attack and five-month occupation of Marawi City in 2017.

The suicide attacks were all in the Sulu archipelago, Abu Sayyaf's stronghold, and were all claimed by Islamic State.

They included a twin bombing of a church in January that killed 21 people, a van bomb at a checkpoint in July 2018 that killed 11, a suicide attack by two youths that killed eight in June, and a woman who prematurely detonated a bomb she was carrying near an army detachment in September.

The attackers included Indonesians, a Moroccan and Filipinos.

Philippine President Rodrigo Duterte has vowed to wipe out Abu Sayyaf and has intensified military operations in its strongholds, although bombings targeting civilians and military have continued unabated.