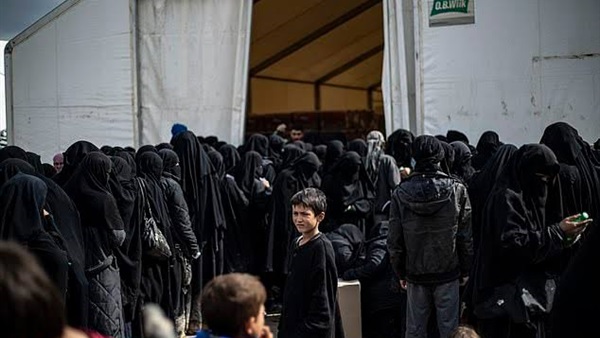 The Washington Institute for Near East Policy released a study recently about al-Hawl Camp in northeastern Syria.

Titled "Al-Hawl Camp: A Potential Incubator of the Next Generation of Extremism", the study, which was conducted by Syrian Kurdish journalist Himbervan Kose, focuses on the role the detention camps in northeastern Syria play in producing the next generation of ISIS fighters.

Detention facilities for individuals affiliated with jihadist groups in the Middle East, it says, have a history of transforming into incubators for the creation and rise of new jihadist organizations, which have proved more dangerous and robust—both in terms of economic strength and manpower—than before.

These organizations, which were founded from the remnants of other jihadist groups, have expanded their scope, goals, and areas of operation, the study says.

It refers to 2003 when American forces proceeded to establish Camp Bucca in southern Iraq near the city of Umm Qasr.

It appears that there was little concern at the time that this prison would later transform into a point of convergence for jihadists from various radical Islamist jihadist groups in Iraq, the study says.

It adds that the prison has housed all kinds of individuals associated with the numerous jihadist groups that had opposed the presence of coalition forces—and especially American forces—in Iraq, and thus became the ideal environment for incubating new jihadist organizations.

It also became, it adds, a meeting point for the leadership of these groups, such as Abu Bakr al-Baghdadi, who was arrested by the United States in Fallujah in February of 2004 at the age of 33.

Camp Bucca should serve as a lesson of the dangers of not working to quickly close jihadist camps, the study says.

However, the more recent al-Hawl camp for Iraqi refugees and displaced Syrians in the al-Hasakah Governorate of Syrian Kurdistan is close to becoming the Syrian version of Camp Bucca, it adds.

The study notes that the camp serves as a point of convergence for more than 12,000 extremists, among them 4,000 women and 8,000 children from families of the Islamic State, or ISIS, who believe in its doctrines and way of life.

It adds that the concentration of these individuals allows for easy exchange of information and is likely to lead to the eventual revitalization of the jihadist group and the indoctrination of a future generation.

While a conversation regarding repatriation of foreign fighters is currently underway, this conversation should feature more prominently the dangers of not removing occupants from the al-Hawl camp as quickly as possible, the study says.

Some of the children of ISIS have lived in the camp for years, while others were born under the care and rule of the Islamic State and raised on a legacy of Islamist jihadism, it adds.

It says these children, according to reports, are prepared to carry out the grievances of their fathers and continue their legacy.

It notes that the women of ISIS have continued extremist education within the camp—children study extremist religious doctrines and expectations from their mothers.

There also exists a significant number of children residing in the camp whose parents were killed during operations carried out by the SDF and the international coalition against ISIS, it says.

The longer the children spend in the camp, the greater their desire for vengeance will be, developed within the environment to which they are being exposed, the study adds.