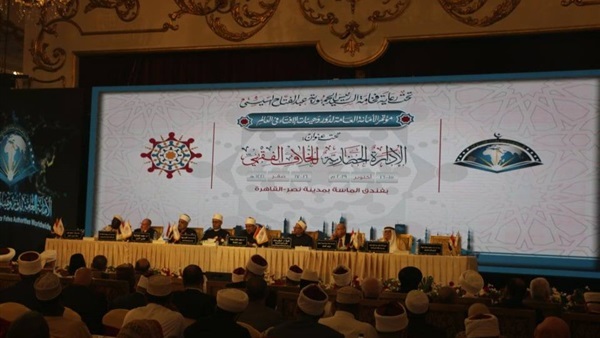 Dr. Ibrahim Negm, senior advisor to the Grand Mufti of Egypt and secretary general of Fatwa Authorities Worldwide, said that the conference of the General Secretariat of Fatwa Authorities Worldwide, which concluded on Wednesday, October 16, represents a statement of account of what has been accomplished, as well as a new horizon to work on the implementation of the secretariat’s mission and achieve its objectives, many of which, by the grace of God, have been accomplished, especially in supporting moderation and countering extremism.

Regarding the practical steps of the conference, which has achieved great success and came up with a series of important projects and initiatives, Negm said, “In order to work on this aspect, a group of committees composed of [Islamic] scholars, researchers and specialists has been formed to achieve several things – first and foremost, the immediate and practical implementation of the theoretical and scholarly recommendations of the conference. In order not to be just ink on paper, work began from the first moment to bring these recommendations into effect, especially in the practical aspect.

Negm explained that the secretariat has begun to coordinate and cooperate more with intellectuals of religious doctrines to produce a joint statement of those concerned with fatwa worldwide to guide jurisprudential dispute, invested through executive programs and cooperation protocols. This came through the trips of the head of the General Secretariat of Fatwa Authorities Worldwide, the secretary general and senior scholars.

He also pointed out that there will be introductory models, in which all doctrines of jurisprudence will be used as a pilot experience and which should be invested in and utilized. Encyclopedias will also be produced of distinguished muftis who have achieved the various doctrines’ standards of edictal moderation, as well as the production of an encyclopedia of those responsible for issuing fatwas, which could also include non-Muslims and ways to benefit from their effort.

On the technological side of the recommendations, Negm said that a set of electronic programs and smart applications will be launched to train muftis on the rules of disciplined jurisprudential choice through the cultural management of jurisprudential differences in order not to leave questioners looted by extremist ideas or confusion, along with launching a new comparative jurisprudence research database to make it easier for researchers and graduate students, rooted and applied using the texts, doctrinal schools and broad jurisprudential experience.

The secretary general said that the Observatory of Doctrinal and Juristic Dialogue Experiences will also be launched to facilitate graduate students in legal, social and humanitarian studies to evaluate the experiences of the doctrinal dialogue, as well as to stay away from previous flaws and adhere to the advantages. It would also study the impact of the doctrinal experience in its stages and conditions on Muslim communities, both positive and negative.

He said that the recommendations did not overlook the educational aspect, as the secretariat will work during the coming period to prepare a number of educational and practical programs to activate the dissemination of a culture of respect for doctrinal difference in the service of social cohesion and stability, and supporting this matter by all means in the field of education at various stages, and in cooperation with the various jurisprudential schools and institutions for the integration of conditioning doctrinal guidance programs coupled with the programs to teach the doctrines for all stages of education.

The secretariat will also publish research and articles related to issuing fatwas and the objectives of Shariah in the monthly magazine “Jusoor” (Bridges). The doctrinal renewal plan will also be implemented by preparing and responding to the bank of contemporary doctrinal questions and modern questions about the origins and branches of the doctrinal schools in order to guide the youth in particular towards the best way to deal with people of different doctrines without intolerance or negligence.

Negm added that Egypt’s Grand Mufti Dr. Shawqi Allam, head of the General Secretariat of Fatwa Authorities Worldwide, has commissioned the Observatory of Takfiri and Abnormal Fatwas, the Observatory of Islamophobia and the Fatwa Index to further study the impact of the doctrinal exploitation practiced by some groups, which lean on sectarian conflicts that distort the image of the doctrinal schools.

He explained that the secretariat will begin the procedures of cooperation and consultation with international organizations, including the United Nations, to grant the secretariat consultative status as a bridge between the bodies and institutions in the field of fatwas and the renewal of religious discourse, and to include this work in the planning of trips of secretariat officials.

As for the initiatives of the conference, which were launched at the end of its activities, Negm pointed out that committees have been assigned to achieve and follow up on the implementation of these important initiatives, led by the issuance of the first document of its kind, “The Doctrinal and Fatwa Tolerance Document”. This document is a strategy and roadmap for the secretariat, and specialists have been tasked with the work of the document’s executive paper, especially in its legal, educational, media and scientific research aspects, as well as the training and scientific programs needed to activate it.

Regarding the second initiative, Negm said that an “International Day for Issuing Fatwas” will be devoted to December 15 of each year to be a global day for fatwas during which events, including cultural awareness programs, would be launched, along with training programs.

The third initiative was the announcement of the allocation of resources for the Imam Al-Qarafi Award for Fatwa Excellence.

Negm added that the secretariat has already begun to prepare for next year’s conference, which will be on theoretical frameworks and practical programs for cooperation and integration between fatwa authorities worldwide.

The last two days have witnessed the activities of the International Conference for Fatwa in its fifth edition, with the presence of delegations of leading scholars and muftis from 85 countries around the world. Discussions and workshops were held on the theme of “Managing Juristic Differences: A Civilizational Approach”.