‘ISIS: Inside the Army of Terror,’ book traces Daesh evolution 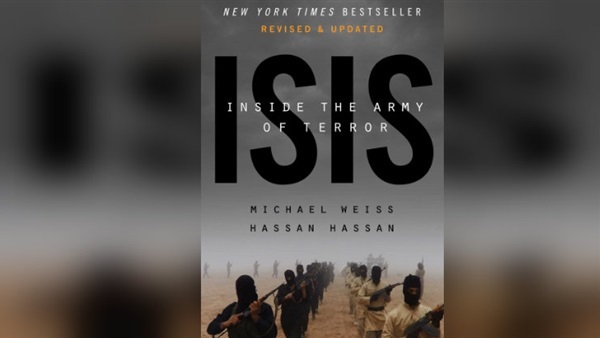 In light of the frequent reports that Daesh is likely to return, or rather its violent ideology, being passed from one group to another, American journalist Michael Weiss and Syrian analyst Hassan Hassan introduced their book ‘ISIS: Inside The Army of Terror’, based on their true experience in Syria.

The book traces the group’s evolution and sheds particular light on how it both cows and co-opts the populations in the areas it controls.

Weiss, a columnist for Foreign Policy, and Hassan, an analyst at the Delma Institute, a research center in Abu Dhabi, provide a detailed explanation of how Daesh “manages savagery” on the ground.

The book, published by Phaidon Press, started by referring to late 2011 events and what the Syrian revolution has resulted, followed by the Arab Spring revolutions, which created a gap that allowed Daesh to expand and further develop.

They trace the group’s full history — how the Jordanian militant Abu Musab al-Zarqawi made his way, from Afghanistan and Iran, to Iraq; how his “Monotheism and Holy War” movement exploited the security vacuum created by the American invasion to build his organization; how it established its mystique by plunging into key battles and federating with Al Qaeda; how it surged forward as Iran-backed Shia leaders who considered the Sahwa a threat persecuted Sunnis until they rebelled.

Moreover, Tehran has planted extreme Shiite militias in Iraq to ignite a sectarian war that further caused losses to security forces in Iraq, weakening defenses against the terrorist organization.

The appearance of Abu Bakr Al-Baghdadi in 2014 and announcing his so-called caliphate in Syria and Iraq was a blow to the international media and politics, not to mention that Baghdadi had links with the Muslim Brotherhood when he was in colleague.

Authors of the book conducted interviews with people and who got captured by the terrorist organization or some journalists who survived the battle, who agree that Daesh leaders seemed like the creators of a new religion that does not have any resemblance with true Islam.

This extremist ideology was accompanied by a persuasion power that attracted and recruited members and leaders through speeches and media outlets, not to mention that they also managed to control some elements that were not even Muslims.

Drawing on original interviews with former US military officials and current Daesh fighters, the authors also reveal the internecine struggles within the movement itself, as well as Daesh’s bloody hatred of Shiite Muslims, which is generating another sectarian war in the region. Just like the one the US thought it had stopped in 2011 in Iraq. “Past is prologue and America’s legacy in the Middle East is sowing a new generation of terror.”