Behind Iraq protests is growing displeasure with Iran 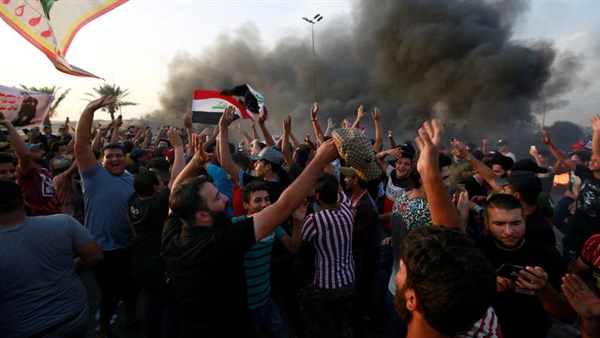 A hashtag is making the rounds on social media networks in Iraq, saying: “The Marja’ does not represent me.”

This, of course, is in reference to the Iran-born Grand Ayatollah Ali Al Sistani, the highest Shiite religious authority in Iraq, who delivered a Friday sermon dividing blame equally between the young angry protestors, who took to the streets of Baghdad last week, and the security forces who responded to their demands with live ammunition, killing 42 and wounding no less than 1,600.

Addressing his audience through an aid, Al Sistani said that the violence must stop “before it was too late.”

He condemned the excessive use of force by all sides, saying that it would have “serious consequences” on the country’s future.

“Al Sistani is no longer a safety valve for the people of Iraq,” said Gaith Al Tamimi, a London-based Iraqi politician and former supporter of Shiite-cleric Muqtada Al Sadr.

“With all due respect to his senior religious position, he is only a safety valve for political parties and militias.”

The 89-year old Ayatollah has long been considered as a voice of reason in Iraq, commanding unmatched influence within the Shiite community, not only in Iraq but beyond.

He has been living in Iraq since 1951 and serves as the head of all seminaries (hawza) in Najaf, the holiest city in Shiite Islam.

“The Marja’ failed because it adopted the exact same sectarian rhetoric of the political parties,” said Abdulrahman Al Nael, another Iraqi analyst.

“The people on the street belong to two generations; those who lived under Saddam and those who came of age after 2003. Both are fed up with how things are being handled. You cannot continue blaming the previous regime for the situation in Iraq. These politicians have been there for sixteen years now. What did they achieve?”

Coinciding with public anger over Al Sistani’s mild statement, sources close to his office in Najaf have since peddled an online story, trying to give him a facelift, saying that his son Mohammad Reza had recently told Qasem Soleimani, head of Iran’s Quds Force, that if Iran continued to meddle in Iraqi domestics, the “street would rise up.”

Last year, angry demonstrators took the streets of Basra in southern Iraq, protesting corruption and Iranian tutelage. They stormed the Iranian consulate and set it ablaze.

According to Al Tamimi, it was criticism of the clerics that led to the sacking of Lieutenant General Abdul Wahab Al Saadi earlier this month, a top Iraqi officer who is widely accredited with defeating Daesh. “He was opposed to the expanding influence of Iran within the security and military services.”

All of them are prominent Iranian proteges who tried, with varying degrees of success, to come across as independent politicians representing a broad spectrum of Iraqi citizens.

Haidar Al Abadi was forced out of office one year ago, after conducting two official visits to Saudi Arabia and saying that he would be abide by renewed US sanctions on the Iranian banking sector, prompting Tehran to call of a state visit that he was planning to make.

He has since mended relations with the Iranians, showing up in Tehran on 10 September for a photo with Ayatollah Ali Khamenei and General Soleimani.