The NLA monitors al-Hasnawi..the most dangerous terrorist in Libyan 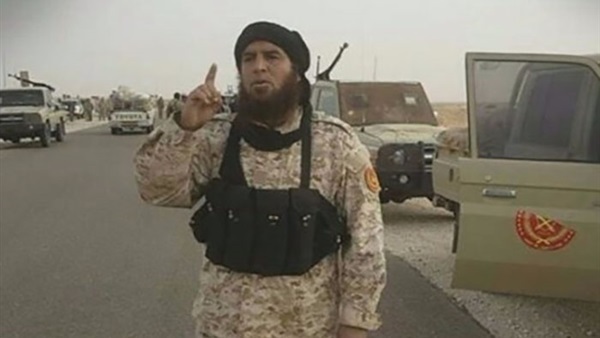 Intelligence sources revealed recently the whereabouts of the Libyan terrorist, Ahmed Abd al-Jaleel al-Hasnawi, the leader of al-Qaeda in Libya.

Al-Hasnawi, one of the most prominent leaders in the organization, prior to the control of the Libyan National Army on the situation in the country, where he led in March 2017, operations in the oil Crescent, and took control of several towns near the city of Ras Lanuf in the north.

Hasnawi provided logistical support to terrorist organisations in the Sahel region, including al-Qaida in the Islamic Maghreb (AQIM) and Ansar al-Dine in Mali, according to the UN. In February 2017, Ahmed al-Hasnawi met with Benghazi Defense Brigades leaders, including Ismail Mohammed al-Sallabi, to coordinate operations, according to the UN and reporting from Boshra News Agency (designated herein).

In 2017, joint statement issued earlier on 25th July, 2017, by the United Arab Emirates, the Kingdom of Saudi Arabia, the Kingdom of Bahrain and the Arab Republic of Egypt where the quartet added nine charity organisations and nine individuals to their terror lists.

Hasnawi, one of the most prominent close of the Algerian Mokhtar Belmokhtar, who is responsible for logistical support for terrorist organizations in the Libyan Sahel, and Ansar Eddine in Mali.

He has also participated in many terrorist operations, and faces charges of involvement in operations that killed a number of Most notably, the most notable attacks on the Barak beach base in May 2017, which killed more than 145 Libyan civilians and military personnel.

In September 2012, Hasnawi was assigned as the commander of the Third Shield Force in the south by the Ministry of Defense of the Brotherhood's General National Congress, which was founded by General Youssef al-Manqoush.

In 2018, al-Hasnawi participated in the terrorist attacks on oil fields accompanied by internationally wanted militias Ibrahim al-Jadran, and the terrorists of the Benghazi Brigades, as protected by the Egyptian terrorist Hisham Ashmawi.

He also placed his cousin on the terrorist lists, Moneim Salim Khalifa al-Hasnawi and al-Makni Abu Talha. The Qatari regime led by Tamim bin Hamad is suspected of providing logistical support to them.