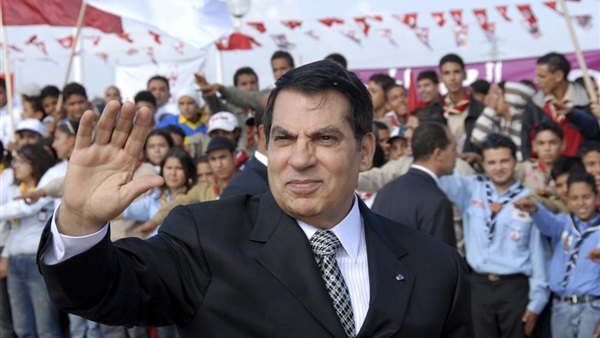 Former Tunisian President Zine El Abidine Ben Ali, an autocrat who led his small North African country for 23 years before being toppled by bloody protests that unleashed revolt across the Arab world, died Thursday. He was 83.

Ben Ali, who had lived in Saudi Arabia since fleeing Tunisia in 2011, died in Jeddah, lawyer Mounir Ben Salha told the Associated Press. The former president was receiving treatment for prostate cancer and hospitalized last week.

His body is to be transferred to Mecca, awaiting the family’s decision on burial arrangements, Ben Salha said.

Ben Ali’s ouster on Jan. 14, 2011 amid Tunisia’s Jasmine Revolution inspired what became known as the Arab Spring, a movement that saw many autocratic leaders swept from power.

Ben Ali was widely detested and convicted repeatedly of corruption in Tunisia after he went into self-imposed exile. But some loyal supporters called for his return as economic and security troubles plagued the country’s new democracy.

As president, Ben Ali’s picture was plastered for decades on billboards and buildings across the country, his face remaining strangely ageless despite the passage of time, his hair still jet-black. It seemed that only death would end his grip on power.

But as revolt swept Tunisia in late 2010 and early 2011, fueled by anger over corruption, repression and unemployment, demonstrators set fire to the president’s photograph, a once-unthinkable act. His image eventually peeled off buildings and billboards nationwide like old wallpaper.

Ben Ali promoted his country of 11 million as a beach haven for European tourists and a beacon of stability in volatile North Africa. It seemed as though he had offered his people a tradeoff: There was a lack of civil rights and little or no freedom of speech, but a better quality of life than in nearby countries such as Algeria and Morocco.

Tunisia’s revolution changed all that, spawning a plethora of political movements and the only democracy to emerge from the Arab Spring movement across the region.

The United States and other Western powers had an ambivalent relationship with Ben Ali. WikiLeaks cables from the U.S. Embassy in Tunis described widespread allegations of corruption among the president’s family, described Tunisia as a “police state” and said Ben Ali had lost touch with his people.

But Ben Ali tried to curry favor with the West through an ongoing crackdown on extremists that human rights groups said was far too brutal and too broad, targeting as potential terrorists anyone with a strict interpretation of Islam.

Born Sept. 3, 1936, near Sousse, a city of white- and sand-colored houses on the Mediterranean, Ben Ali embarked on a career as a professional army officer. He was responsible for Tunisia’s internal security throughout a 1985 confrontation with neighboring Libya and a crackdown on Islamic fundamentalists.

He was briefly prime minister in 1987 before setting his sights on the presidency.

In a bloodless coup, Ben Ali seized power from then-president-for-life Habib Bourguiba, the founder of modern-day Tunisia who set the Muslim country on a pro-Western course after independence from France in 1956. Ben Ali removed Bourguiba from office for “incompetence,” saying he had become too old, senile and sick to rule.

Ben Ali promised then that his leadership would “open the horizons to a truly democratic and evolved political life.” But after a brief period of reforms early on, Tunisia’s political evolution stopped.

Ben Ali consistently won elections by large margins. In 2009 he was re-elected to a fifth five-year term with 89% of the vote. He had warned political opponents they would face legal retaliation if they questioned the vote’s legitimacy.

Under Ben Ali’s watch, Tunisia was relatively untouched by the kind of Islamic extremist violence that wracked neighboring Algeria, except for a 2002 attack on a synagogue on the Tunisian resort island of Djerba that killed 21 people, mostly German tourists. Investigators linked the attack to al-Qaida.

After the 2011 revolution, Islamic fundamentalism surged in some quarters and security services struggled against extremists linked to the Islamic State group.

Ben Ali is survived by his second wife. Leila Trabelsi and their three children, as well as three children from his first marriage.