Map of Jihadist and militant presence in Libya 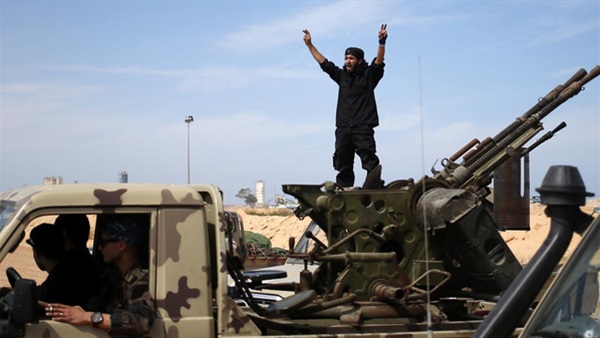 The map of Takfiri group presence in Libya has undergone some change. Some groups have already disappeared. This was particularly true after the commander of the Libyan National Army, Khalifa Haftar, launched "Operation Dignity" in May 2014. Haftar staged the operation against extremist groups. The operation succeeded in liberating 80 per cent of Libyan territories by mid-2017, according to Haftar himself.

Having received one blow after another by Haftar's troops, especially in eastern Libya, Takfiri groups started employing new tactics. These tactics included the following:

The following militant groups have presence in Libya at present:

This is one of the most outstanding Takfiri groups in the northeastern Libyan city of Darnah. The group was founded on December 12, 2014, soon after the launch of Operation Dignity. Several Takfiri groups joined the council, including Ansar al-Sharia, a militant group whose ideology is similar to that of al-Qaeda. Ansar al-Sharia was founded by Mohamed al-Zahawi in early 2012. It had presence in Darnah, Sabratha, Benghazi, Misurata, Tripoli and Sirte.

Al-Battar Brigade was also one of the groups that joined the council. The brigade is made up of a number of Libyan militants who fought in Syria and returned to their mother country.

The Abu Selim Martyrs Brigade also joined in. The brigade was founded by Salem al-Derbi in February 2011. Al-Derbi was killed in battles with Daesh in January 2015.

Elements of the Libyan Islamic Fighting Group also became part of the council. The group was officially declared in a border area between Pakistan and Afghanistan in 1990. It used some of its sleeper cells in Libya to fight against the late Libyan leader Muammar Gaddafi. The members of these cells then joined the council in October 2015 in the fight against Daesh.

The Darnah Jihadists' Consultative Council then morphed into several terrorist groups that include the following:

Commanded by sacked Egyptian army officer, Hesham Ashmawi, al –Mourabitoun is mainly present in Darnah where it trains militants and then sends them to Egypt. One of the militant groups it sent into Egypt staged an attack in Bahriya Oasis (around 365 kilometers west of Cairo). This group was commanded by sacked Egyptian army officer Emad Abdel Hamid.

Some of the members of al-Mourabitoun continue to be present in Darnah. They will try to move their activities to Egypt in the coming days, despite the presence of reports about the disbanding of the group. Smaller cells, some of them affiliated to al-Mourabitoun and others affiliated to the Darnah Jihadists Consultative Council, are also present in Darnah and in the central Jufra District. These cells are commanded by a leader of the Egyptian Salafist Front, according to sources.

This group was founded in an area near the joint border between Pakistan and Afghanistan in 1990. It was founded by one of the members of the Islamic Group after he escaped a crackdown in Libya by the late leader Muammar Gaddafi in the 1980s. Other members of the group who escaped the same crackdown joined in groups fighting against the Soviet occupation of Afghanistan. Hardened by years of fighting in Afghanistan, the same militants officially formed the Islamic Group and brought sleeper cells in Libya back into action in the 1990s.

The group then claimed responsibility for some attacks that were staged inside Libya at the time. In 2007, the Libyan Islamic Fighting Group made reconciliation with Gaddafi's regime and declared ideological revisions. Nonetheless, the group went back to violent work soon after the eruption of the popular uprising against Gaddafi in February 2011.

The group is now mainly based in eastern Libya, specifically in Darnah, which has become the main stronghold of the group. The group also has some sleeper cells in Benghazi.

These units were formed soon after the Benghazi Revolutionaries Consultative Council was vanquished by Haftar's troops and kicked out of Ajdabiya and Benghazi. The units formed the nucleus for the alliance of a number of Takfiri organizations that were defeated by Haftar's troops in 2017. These organizations included the Benghazi Revolutionaries Consultative Council and the February 17th Martyrs Brigade which combined 12 different militant groups and was founded by Fawzi Abu Ketf after the 2011 revolution.

The Daesh-affiliated Islamic Youth Council, a group of foreign fighters and Ansar al-Sharia renegades, was founded by Suleiman al-Tajouri who was assigned by Daesh leader Abu Bakr al-Baghdadi to form the group in Darnah in October 2015. The promulgation of the council came after its fighters controlled Darnah and declared it an Islamic state in August 2014.

The organization then moved into Sirte to turn it into a new base. Nonetheless, it was destroyed by troops affiliated to the Fayez al-Sarraj National Accord Government.

Although Daesh's organizational structure is almost over and most of its leaders and militants killed, the organization still has presence in Benghazi and al-Bayda. Organization militants form a number of sleeper cells in the two cities.

Western Libya's militias can be subdivided into two sections, namely militias that back the al-Sarraj government and others that back the Salvation Government which is backed by the National General Congress. Here is a list of these militias.

Militias that back the National Accord Government

This is one of the largest militias in western Libya. It is commanded by Abdel Raouf Kara. The group is made up of 15 militant groups. It is mandated with the job of protecting the government in western Libya. The force's operations are limited to the Mitiga Complex in the northeastern part of Tripoli near Tripoli Airport.

This brigade is made up of some of the anti-Gaddafi revolutionaries. It has 500 members and is mainly present in the Friday Market area near Mitiga Airport. It possesses heavy equipment and works to protect the offices of the National Congress in Tripoli.

This is a militant group commanded by Abdel Ghani al-Kakly. The group's activities are concentrated in the Abu Selim District where it preserves security.

This is one of the largest militant groups in Tripoli. It has 1,300 fighters and is commanded by Haitham al-Tajouri, known for his hostility to Haftar. This militia protects the offices of the National Congress in Tripoli as well.

This is a militant group that was formed by the National General Congress in Sirte in 2016. It has 1,000 fighters. It is responsible for protecting the headquarters of the al-Sarraj government.

Militias that back the Salvation Government

This group is made up of 800 fighters. It is responsible for defending the offices of the Salvation Government in Tripoli.

This group was founded by Mohamed al-Halbous during the anti-Gaddafi revolution. Al-Halbous was killed in Misurata and succeeded by Bashir Abdelatif. The brigade has 1,000 fighters who are responsible for defending the presidential palace, the road to the airport and some of the areas in southern Tripoli.

This group follows a Jihadist Salafist ideology. It is affiliated to al-Qaeda. It was founded by Abdelhakim Belhaj. It participated in battles against the Soviets in Afghanistan. It then moved its operations to Libya to turn it into an Islamic state. Soon, however, the group was defeated and Belhajw was put in jail in Tripoli. That was in 2001.

In 2007, Belhaj reconciled with the Gaddafi regime and was released from jail. During the 2011, he reformed his group. Group fighters are mainly present in Tripoli to defend the offices of the Salvation Government.

This militia is affiliated to Belhaj's Group. It is commanded by Sami al-Saadi and Khaled al-Sherif. It is mainly based at the al-Hadaba Prison in Tripoli.