PMF Leaders divided over blaming US for Arms Deport Blasts 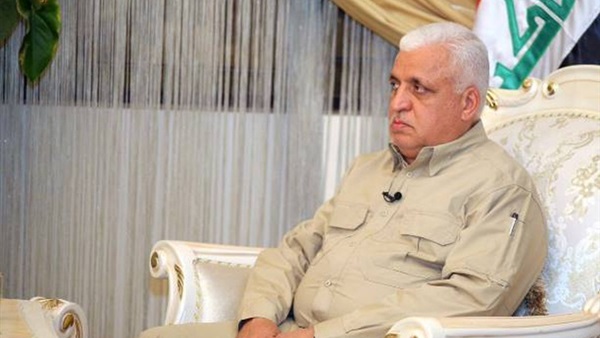 Head of Iraq's Popular Mobilization Forces Faleh al-Fayyadh appeared on Thursday to renege on statements made by his deputy in blaming Israeli drones and the US for a series of attacks on bases run by the militia.

Fayyadh said the statement by his deputy, Abu Mahdi al-Muhandis, did not represent the view of the PMF or that of the Iraqi government.

He instead alleged that the attacks on the bases over the past weeks "were the result of an act organized by a foreign side," without naming that side.

The statement highlights divisions within thePMF, which is mostly run by the deputy, Muhandis, a military commander known for his anti-American sentiments.

The PMF said it had carried out its own investigation and pointed the finger at the US military.

It claimed it had information that the US brought four Israeli drones from Azerbaijan to Iraq "as part of the US fleet" to carry out reconnaissance and targeting of militia positions.

Four bases used by the PMF have been hit by mysterious explosions over the past month, but there have been no claims of responsibility or media access to the facilities.

The most recent of the explosions came Tuesday night, at a munitions depot north of Baghdad. The deadliest, a July 19 blast, was blamed on a drone that hit a base in Amirli, northern Iraq, killing two Iranians and causing a huge fire.

A massive explosion on August 12 at the al-Saqr military base near Baghdad shook the capital, destroyed several homes, killed one civilian and wounded 28 others. The base housed a weapons depot for the Iraqi federal police and the PMF.

A panel created by the government to investigate that blast ruled out earlier suggestions that it was caused by an electrical short circuit or faulty storage of munitions. Instead, it said it was caused by a drone strike, according to a copy of the panel's report obtained by The Associated Press.

The report did not say who the drone belonged to.

Following a national security meeting last week to discuss the string of attacks, Iraqi Prime Minister Adel Abdul Mahdi ordered a ban on all military flights throughout the country — including by members of the US-led coalition in Iraq — unless specifically authorized by the Defense Ministry.

The US military's Central Command quickly said it would comply with that order as its forces are "guests within Iraq's sovereign borders."

An estimated 5,200 US troops are in bases across Iraq in training and advisory roles.