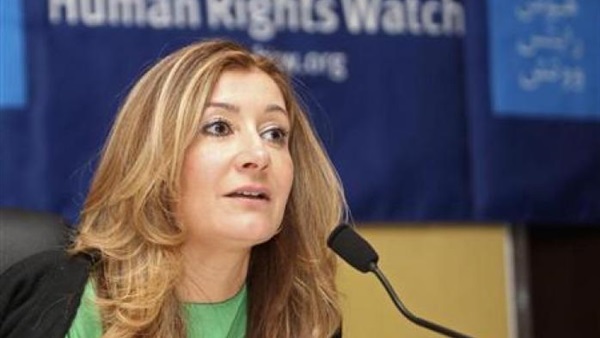 The appearance of Sarah Leah Whitson, the director of Human Rights Watch (HRW)’s Middle East and North Africa division, on the pro-Muslim Brotherhood Mekamleen channel leaves no doubt about HRW’s absolute lack of the most basic standards of professionalism and objectivity in its coverage of the situation in Egypt, the State Information Service (SIS) said on Monday.

According to a statement posted by SIS on its website, Whitson’s interview with anchor Mohamed Nasser of Mekamleen channel, that broadcasts from Turkey, revealed the HRW’s obvious bias for an entity classified in Egypt and several world countries as a terrorist group which in turn proves its overt collusion with some terrorist groups.

The SIS statement cited several indicators that attest to the incendiary role of Mekamleen channel. First of all, Mekamleen is considered a propaganda platform of the Muslim Brotherhood as its establishment coincided with the fall of the Brotherhood from power in Egypt in Mid-2013. The main goal of the channel is to promote for the agenda of the terrorist group which entails spreading rumors and false information about the Egyptian State and jeopardizing the country’s stability, it said.

Mekamleen also launches campaigns to incite against some Arab governments and hosts MB elements in their programs on a regular basis, it added.

Thirdly, it pointed out, anchor Mohamed Nasser is notorious for his hostile propaganda against the Egyptian State. He is wanted by the Egyptian authorities for his involvement in the 'Hasm vanguard' case. He was convicted and sentenced to 8 years in prison over charges of attempting to overthrow the government, inciting to kill police officers and spreading false rumors, it said.

It also said that Nasser is known for inciting murder on more than one occasion. For example, it continued, in one of his episodes that was aired in January 2015, Nasser said “Kill his officers, I want to tell the wife of every officer that your husband will be killed if not today then tomorrow, your husband will be murdered” then he later added “If you see an officer kill him. He said “I am telling every officer’s wife and son, you husband will die, your children will be orphans”.

Nasser also called for carrying out suicide attacks saying “Instead of committing suicide go throw yourself among them and you will die anyway”, according to SIS. It said that in another episode where he interviewed “Salama Abdel Kawi” a prominent member of the Muslim Brotherhood terrorist group in 2015, Nasser asked Abdel Kawi a question about permitting the killing of Egyptian State officials, Abdel Kawi responded “Whoever is able to do this, then it will bring him closer to God”.

Elaborating, SIS also said the following: Human Rights Watch’s total bias to the Brotherhood terrorist group is supported by its systematic smear campaign on the human rights situation in Egypt that started with biased and false statements and reports that were strongly rebutted by the Human Rights Unit of the State Information Service.

Nasser’s clearly incendiary role and his support of Brotherhood terrorism against the Egyptian people and the government leaves no room for interpretation and this makes the appearance of a senior HRW official as a guest in the channel absolutely unacceptable under any circumstances.

Mrs Whitson focused during her 70-minute interview, that was aired from Istanbul, on the human rights situation in Egypt and other regional and world countries. However, she did not even point once to the egregious violations committed by the government of President Recep Teyep Erdogan against the Turkish people on a daily basis.

It seems that HRW and Mrs Whitson should be reminded of some grave Turkish violations of human rights including the 170,372 Turkish citizens who were sacked from their jobs since a 2016 coup attempt. The sacked citizens include 17,844 army officers, 16,409 military cadets, 5,335 governors and administrative staff members, 33,417 police officers, 4,463 judges and public attorneys, 55,288 teachers, 7,220 employees in the Ministry of Justice, 7,249 physicians and medical staff, 3,330 imams and preachers and 22,474 operating in the private sectors.

The other violations include shutting down 200 media outlets, blocking access to 100,000 websites, closing 1,719 NGOs, 1,284 private schools and 15 private universities and detaining 159,506 individuals under emergency laws that were in place since 2016 according to reports released by the Office of the United Nation High Commissioner for Human Rights.

Turkey is also considered the largest journalist jailer. According to international organizations, 68 journalists are being kept in Turkish prisons while Turkish sources put the estimate at a horrifying 319.

At the end, the SIS statement reiterated strong condemnation of human rights watch's unprofessional conduct and support of terrorism. It called upon the international public opinion to pay serious attention to how HRW deviated from its core role as a human rights organization to a political actor or rather a political tool that terrorist entities and their state sponsors use in their futile quest to compromise Egypt's unity and stability.