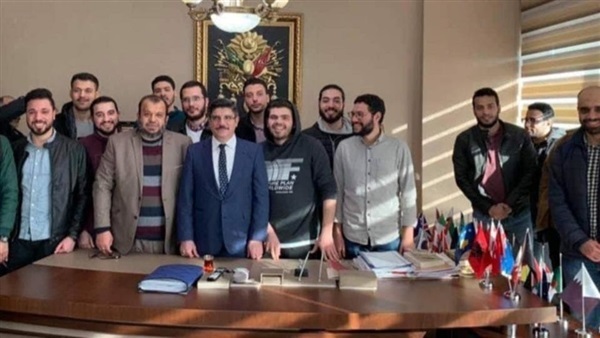 There are systematic attempts by the Muslim Brotherhood and affiliate organizations to chart a new course of action. The group also wants to change its old structure.

Before they unveiled their new policy line, the Muslim Brotherhood leaders held meetings with a number of Western figures. During these meetings, they discussed conflicts between their group and the West, diversity, the Arab-Israeli conflict, women's political participation, and religious minorities in Islamic societies.

On January 15, 2013, the International Organization held a meeting in Turkey, in which it selected the members of the new secret wing, approved the expansion of the consultative council and the expansion of representation of areas of gravity, such as the Gulf. The organization also approved the development of financial resources, development of communication apparatus and advocacy.

The organization also agreed to adopt a global charter of Islamic action and activate it, identify mechanisms of coordination with other Islamic groups, and develop public relations and provide an opportunity for meetings with an agenda preceded by processing.

It also agreed to identify the ideas and visions of states, institutions and important figures, to present some of the Muslim Brotherhood figures as symbols on the world stage, and to work on the establishment of pressure groups in cooperation with some Islamic parliamentarians.

Following this meeting, a decision was issued on May 1, 2013, to expand the global office, activate the zoning, and coordinate with various Islamic groups.

In particular, on March 7, 2013, the European Parliament held a meeting in Brussels, attended by the most prominent leaders of the international organization from Morocco, Algeria, Tunisia, Egypt, Malaysia, Gaza and Turkey.

The meeting was also attended by leaders of Egyptian Salafists and some Israeli experts. They all discussed the future of political Islam after the Arab Spring, the position of political pluralism, and the relationship with Israel.

Years later, in June 2016, Khaled Meshaal, the head of Hamas' politburo, announced the new document of Hamas, in which it recognized the 20th clause of the existence of Israel and the new charter of the movement, and said that it was prepared by London's largest law firm, Tony Blair's office.

The leader of the Muslim Brotherhood in Kurdistan, Ziad Shafiq Moheisen Al-Rawi, an observer in the Iraqi Muslim Brotherhood, a well-known physician who had lived for years in London and was responsible for contacts with US intelligence before the overthrow of Saddam Hussein.

With the new arrangements, Europe is represented in the plan of the new Brotherhood, the safe haven for the group, where political masculinity will intersect with personal relationships and combine plans and goals through many institutions and centers.

The new international plan for the group depends on making the group a trend and a general trend. Thus, the European arena has defined the separation of the Federation of Islamic Organizations in Europe from the international organization of the Muslim Brotherhood, following reviews by its former leader, Abdellah Ben Mansour, causing sharp differences between the polar wing led by Moroccan Chakib Benmakhlouf and Iraqi Ahmad al-Rawi, Palestinian Anas al-Tikriti.

This union, which includes hundreds of associations in most European countries, is considered the European arm of the group. This is an application of the new group style, which will depend on resorting to abandoning the world community project ostensibly, while maintaining secret internal relations with organization, and decomposition of the old religious discourse of the group, to present a new image of the Brotherhood.

A new generation of children, all European, started their culture differently from the founding generation, and now they are advancing in the elections, most of them in the parties of the socialist left and the green parties. They have even reached parliaments in countries, such as the Netherlands, Sweden, France and Britain. They focus their work on creating political alliances in Europe.

The field organization, now led by Europe, is Samir Falah, a resident of Germany, the group's observer in Europe, and Rachid Ghannouchi, a spiritual guide to Lebanese Faysal al-Mawlawi.

It is noteworthy that there has been a process of inheritance from parents to children, both in the organization of European youth, or women's organizations.

There are also mosques and cultural centers that contribute to the religious supervision of the Muslim minorities, and we also find many official or semi-official institutions that represent Muslim minorities in the administrative authorities in this or that European country.

What is meant by revelations, of course, is the ever-changing images of the political movements of Islam, and the transformations and coups of Islamic organizations throughout the East and West, which Gill Kibel, who met Ghannouchi, called the "Third Generation Cultural Revolution".

The network, led by Samir Falah, is not concerned with financing operations, which now have multiple sides. The most important of these are the trade in halal meat, which provides the group with $14 billion, printing and publishing companies, and charitable societies.

The independents have a big role in these arrangements, such as Hani Ramadan, Al-Libi Imad Al-Banani, known as "Dynamo Brotherhood in Europe" and "Al Banani". There are Mohammed Karamouz, Jaber Ben Ahmed Al Rawi and Algerian Sultan Bouthara, who plays a major role in this period.

From the Gulf to Europe

The Gulf has a big role with the new Brotherhood. Kuwait is the heart of the work and its center, with its field organization and the network, the most important of which are the Najat Charity, Mercy, Reform, Zakat House, Charity and 42 other institutions.

As for Qatar, its new role is to develop new mechanisms to finance European Muslims outside the usual institutional framework of the Muslim Brotherhood, in an attempt to distance itself from the stereotypical image of the financing of political Islam by creating an $100 million ANELD Fund, which has carried out several projects in the name of entrepreneurship for Muslims across Paris.

Recently, following a meeting led by adviser Yassin Aktay in March 2018 with the leaders of the group, it was agreed to change the names of the Qatari organizations to new names, such as Qatar Charity, which became Nectar Trust, and the withdrawal of the role of the country in favor of the Turkish, who will manage these files directly, It was agreed that Gamal Badawi (Canada) would supervise the file of education, control all the educational institutions in the world for the opening of Allah, by buying them or competing with a better alternative. Wadah Khanfar also supervises the media file and Azmi Bishara collects all the rest from the left, and the opening or purchase of research centers.

Turkey established the so-called Knowledge Foundation, and the Egyptian Muslim Brotherhood, Gamal Badawi, a resident of Canada, was charged with managing the educational bodies' file.

It will also be supported by Turkey (Didept), a Turkish institution for the administration of religious affairs, including the French Council of the Islamic Faith, the Belgian Executive Center, and a large number of religious institutions in the Netherlands and Eastern Europe.