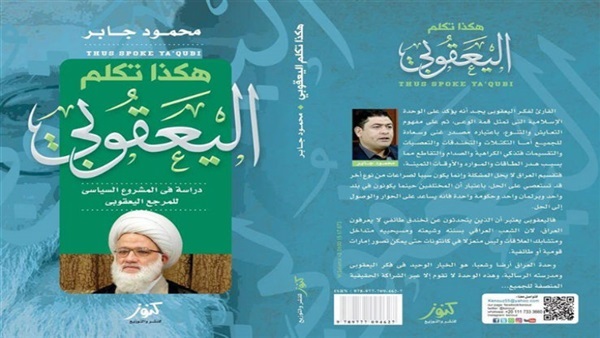 Researcher on Iraqi affairs Mahmoud Jaber has shed the light on one of the most prominent Arab Shiism branches in Iraq, which aimed at establishing an Arab Shiism authority in Najaf and ending the dominance of the Persian blood over the Twelver Shiism branch.

In his 160-page long book entitled “This is How Yaqoobi Spoke”, Jaber goes through a project that was adopted by a prominent Iraqi Twelver Shi'a Marja' Mohammad al-Yaqoobi.

Yaqoobi is one of the most widely followed Marja' in Iraq who was born to an Arab family descending from the Aws tribe in Najaf. He wrote many religious, political, social and economic books and research papers.

The chapters of the book goes through Yaqoobi’s highlights on citizens, the society, social jurisprudence, the Iraqi identity, the situation in Iraq, Egypt and the Arab World and the relation with the West.

Another issue that the book focused on is the Governance of the Jurist, which is a post-Occultation theory in Shia Islam which holds that Islam gives a faqīh (Islamic jurist) custodianship over people.

The book introduces a proper concept of the Governance of the Jurist that is similar to the political theory of implementing democracy, pointing out that it is not enough to claim custodianship over people without their consent.

The book added that such custodianship must be voted over and not just determined by a small group of jurists and religious figures.

Yaqoobi also refuses spreading the faqīh influence to other countries, which ends the state of double loyalty and boost national values, not to mention stopping anyone from taking advantage of religion and doctrines to grow influence inside other countries. Also, this puts an end to the Sunni concept of the Islamic caliphate.

He stresses that such guardianship does not mean imposing the opinion of one person on a while nation, the confiscation of its will or a coup against democracy, however, a faqīh should be a patron over the will and safety of the nation to preserve its unity and dignity, because he is supposed to represent the law, which gave him this authority.

Yaqoobi also made a change in the role of Shiite reference in Iraq as he adopted an idea that prepares Shiite figures in order to be able to properly manage the country.

The Yaqoobi reference is based on organizing and adobting strategic ideas, completely away from any absurd management of the nation’s capabilities, especially financially, as he sees spending money for the interest of Iraq and the Iraqi community instead of funding proxies.

Yaqoobi is considered one of the most prominent Shiite figures in Iraq, he has been rejecting federalism, warning that it aims to divide Iraq.

In his book, Jaber affirms Yaqoobi is preparing a project to establish an Arab Shiism reference that introduces a new vision that magnifies the concept of building a national and a civil state that urges moderation and rejection over sectarian visions of religion.