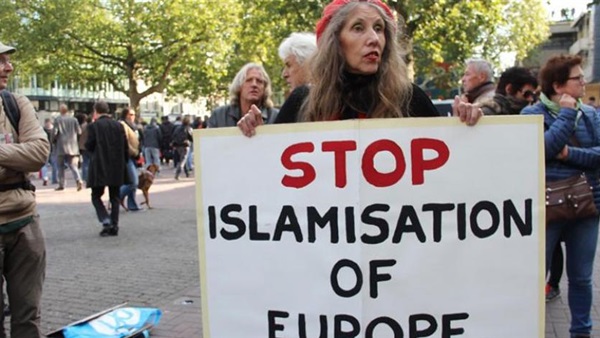 It appears to be evident at first glance of Western literature dealing with the phenomenon of Islamophobia that there are biases and prejudices in most of these studies, both in analysis and deduction, with quantitative and field studies looking at the increase or decline of fear of Islam and Muslims.

Grand Imam of Al-Azhar Dr. Ahmed al-Tayyeb’s speech at this year’s Laylat al-Qadr celebration addressed this phenomenon with bitterness, reflecting the reality of Western determination in dealing with Islam and attaching the concepts of extremism and terrorism to it, which harms the foundations of coexistence between people of different faiths.

Egyptian President Abdel Fattah al-Sisi also addressed this phenomenon in his speech at the summits in Mecca held in early June.

Everyone – and foremost the West – has come to face real questions about what benefit our societies can gain by honoring terrorists with the label of Islam, which is practiced by more than a billion people around the world, reminding us of the courageous attitude of New Zealand Prime Minister Jacinda Ardern, who refused to speak on behalf of the terrorist who committed the massacre at the Nour Mosque in Christchurch.

This report focuses on dissecting the concept of Islamophobia for the purpose of dismantling it, as well as the effects of Western policies on this feeling, especially in light of a Stanford University study on the decline of Islamophobia among Liverpool fans influenced by Egyptian international player Mohamed Salah.

In addition, the report indicates that al-Azhar is dealing with this phenomenon, especially in light of Tayyeb’s speech at the Ministry of Awqaf’s Laylat al-Qadr celebration in the early June.

The idea of ​​Islamophobia emerged in Edward Said's book “Orientalism” in the late 1970s, in which he recognized that the West linked Islam to negative images and held negative feelings toward Muslims.

However, the concept of Islamophobia emerged in its current form in the late 1990s – specifically since 2001 – when Western media and organizations linked Islam to violence.

There have been several international conferences held regarding this phenomenon, such as the 2006 United Nations Conference on Confronting Islamophobia, which was attended by then-Secretary General Kofi Annan, as well as numerous reports and conferences from the European Union and the United States.

Islamophobia has no specific definition, but Jörg Stolz defines Islamophobia as the rejection of Islam, Islamic groups and Muslim individuals. However, the concept has gone beyond the context of the social phenomenon and must be studied further, with some writers considering Islamophobia to be a doctrine or religion that must be condemned.

The New Zealand government's handling of the Christchurch incident represented a turning point in the history of Western dealings with terrorist crimes against Muslims.

Western society has typically clung to labeling crimes committed by organizations considering themselves Islamic as terrorist, even associating Islam itself with terrorism in an attempt to promote Islamophobia, which has harmed the integration of Muslims into Western societies.

However, Muslims benefited from this incident in the wave of solidarity announced by the people of New Zealand, where thousands of New Zealanders gathered around and inside mosques to learn about Islamic culture and support New Zealand Muslims.

In the same context, the adhan – the Muslim call to prayer – was broadcast on official media, while the Arabic word for peace, “salam”, was printed on the front page of New Zealand daily newspaper The Press, along with the names of the victims of the terrorist incident, in an attempt to contain the phenomenon of Islamophobia.

Responsibility to correct the stereotype

A Stanford University study for the Institute for Immigration Policy has highlighted the positive impact that Egyptian player Mohamed Salah's move to Liverpool has had on the decline of Islamophobia and hate crimes in Merseyside County.

The study showed a decrease in hate crimes against Muslims in the province by almost 19%, while anti-Muslim sentiments dropped from 7.2% to 3.4%.

The authors attributed the decline in the rates of hostility to Islam and Muslims in the county to the positive image of Islam as shown by Salah, highlighting his performance and high ethics in and out of the stadium.

Salah has been able to provide the appearance of a diligent Muslim who is interested in work and brilliance – a much different picture than that of the terrorists who attribute themselves to Islam.

The study relied on an analysis of more than 930 hate crimes in the UK and also analyzed about 15 million tweets of football fans in the UK. It should be noted that the American magazine Time chose Salah among its 100 most influential figures in the world for 2019.

The vote is currently on the rise in Britain to force the Conservative Party to adopt the concept of Islamophobia, which was approved by a parliamentary committee in the House of Commons consisting of members of the Labour Party, Liberal Democrats, Scottish National Party, and Welsh nationalists.

The committee considered Islamophobia to be a kind of racism that targets all that is Islamic or imagined to be related to Islam. The aim of defining this ambiguous concept was to address the steadily growing phenomenon among the British population.

The far right, which is based on theories of white supremacy over other races, tends to rely on this concept to win elections, taking advantage of the waves of immigrants and asylum-seekers from areas of conflict in the Middle East. They present themselves as defenders of the European identity and demography, which would be affected by immigration.

The events of September 11, 2001 have had a negative impact on Muslim communities and minorities in the West. At the same time, these events have contributed to the rise of the far right and populism, which works to preserve European identity and nationality from the dangers of globalization and open immigration policies.

Sheikh Ahmed al-Tayyeb plays a vital role by cooperating with the Muslim Council of Elders as a UAE religious institution to revive the idea of ​​dialogue between East and West. This strengthens the fight against Islamophobia, which has been and continues to be an obstacle to the integration of Muslims in Western societies.

The Grand Imam of al-Azhar and the Vatican Pope have met about five times during the past three years, reflecting in one way or another the keenness of the two spiritual leaders to support peace and coexistence between them. This was reflected in the document signed at the conclusion of the Global Conference of Human Fraternity hosted by the UAE in February 2019.

Despite al-Azhar's great role in promoting dialogue with the West to confront the far right’s Islamophobia, it did not notice any positive improvement in the West towards the phenomenon, which continues to be reinforced by the populist rhetoric of the far right. This was apparent in Tayyeb’s speech at the Laylat al-Qadr celebration, where he blamed the failure of Arabs and Muslims to confront this phenomenon, accusing them of disunity and being preoccupied with their own interests.

Finally, Egypt and its religious institutions have played a major role in promoting dialogue between the East and West. Al-Azhar has hosted several international meetings and conferences, such as the East and West Forum – an open and civilized dialogue between Islam and the West. The Grand Imam sees an opportunity for discussion on common issues between Islam and others to support the principle of coexistence.

Egypt’s Dar al-Iftaa has also established the Observatory for Monitoring Islamophobia, which specializes in monitoring and addressing the phenomenon in order to change the stereotypical image of Islam and Muslims in the West. The observatory operates in various foreign languages – including English, French and German – with the aim of addressing the West in its own language.