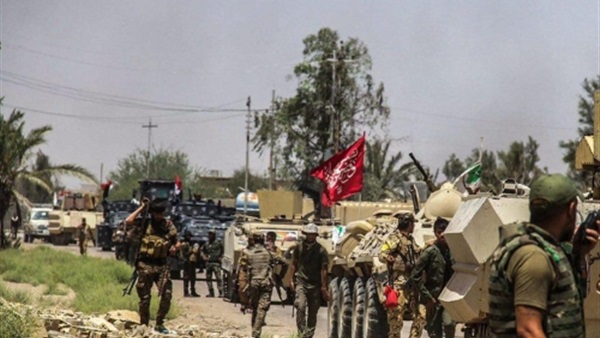 Here “The Reference” will reveal the history of the Iraqi militia, Iran’s most prominent arm in Iraq.

Hezbollah Brigades consisted of many military groups like the brigade of Abu al-Fadl al-Abbas and the Karbala Brigades and Al-Sajad battalions and Zaid bin Ali Brigades, all armed Shiite militias announced reunited under the name of “Iraqi Hezbollah” in 2006.

Hezbollah originated as an underground anti-Saddam network. Following the 2003 invasion of Iraq, the Hezbollah Movement seized buildings formerly used by the Iraqi General Intelligence Service in the al-Alwiya neighborhood of Baghdad.

“We believe that what we seek in our jihadist work is access to the rule of Islamic laws, because it represents one of the highest goals that God has set for prophets to achieve on earth and as an inevitable result of all messages, Led by Imam al-Mahdi” Hezbollah’s website reported.

The talk about governance in Islam is close to the ideas of Sayyid Qutb, one of the most important Muslim brotherhood members, and was followed by radical groups, both Sunni and Shiite, especially the founder of the Iranian regime Khomeini.

Hezbollah is a Shiite organization that believes in velayat-e faqih, or the Guardianship of the Jurists, which recognizes the Supreme Leader of Iran as the leader of the Shiite Ummah.  As such, all members of KH swear an oath of loyalty to Iran’s Supreme Leader, Ayatollah Khamenei, who they accept as their spiritual leader.  In line with its allegiance to Iran and the principles of the Iranian Revolution, KH seeks to institute a Shi’a Islamic government in Iraq with ties to Iran.

According to the U.S. Department of State, KH is “a radical Shia Islamist group with an anti-Western establishment and jihadist ideology.”* The group is virulently anti-American and ideologically loyal to the Iranian regime.

Anti-American: During the U.S.-led war in Iraq, KH built its reputation by targeting U.S. personnel and interests and killing numerous U.S. soldiers in terrorist attacks.* Since the U.S. military withdrawal from Iraq in December 2011, KH has retained its anti-American ideology.

KH’s website states that the group’s first goal “was and still remains: thwarting the American project in the region, defeat of the occupation, and expelling them from Iraq, broken and humbled…. As for our jihadi pillars, there are four. Firstly, waging jihad against the occupation until the last American is expelled from Iraq.”

In KH’s efforts to fight ISIS in Iraq, KH remains opposed to any cooperation with the United States. In September 2014, for example, KH released a statement saying, “We will not fight alongside the American troops under any kind of conditions whatsoever. [Our only contact with Americans will be] if we fight each other.”

In March 2015, KH’s military spokesman reaffirmed the group’s anti-American position, saying, “It is not possible for Kataib Hizbollah or any of the resistance factions to be in the same trench as the Americans.”

In December 2017, following ISIS’s defeat in Iraq, KH released a statement declaring that “the enemy of humanity, the US, can no longer desecrate Iraqi soil, as the fighters of [KH] will not allow them to do so.”

Pro-Iranian: KH’s loyalty to Iran is key to the group’s ideology. A 2013 RAND Corporation report claims that “Kata’ib Hezbollah, like Lebanese Hezbollah, is used as a tool to ‘export the Islamic revolution’ as practiced in Tehran.”

KH openly accepts Iran’s vision of velayat-e faqih (Guardianship of the Jurists), a strain of political theology that entrusts Iran’s Supreme Leader with unique authority in the Shiite faith.

Members of KH swear an oath of loyalty to Iran’s Supreme Leader, Ayatollah Ali Khamenei, and accept him as their own spiritual leader.

The group's structure is secretive, but Abu Mahdi al-Muhandis, an adviser to Iran's Quds Force and former Badr Organization member, is known to be a senior figure in the group. The group receives training and funding from the Quds Force.

The US State department also claimed Lebanon-based Hezbollah provided weapons and training for the group.[38] It came to prominence in 2007 for attacks against American and coalition forces,[32][39] and was known for uploading its videos of attacks on American forces on the internet.

In Summer 2008 US and Iraqi Forces launched a crackdown against Kata'ib Hezbollah and the "Special Groups", the US military term for Iran-backed militias in Iraq. At least 30 of its members were captured during those months. Many of the group's leaders were captured and US officials claimed that "as result much of the leadership fled to Iran".

On 2 July 2009 the group was added to the U.S. State Department list of Foreign Terrorist Organizations. The group was held responsible for numerous IED bombings, mortar, rocket and RPG attacks as well as sniper operations, targeting US and Iraqi Forces and the Green Zone, including a November 2008 rocket attack that killed two U.N. workers.[39]

In December, 2009, the group intercepted the unencrypted video feed of MQ-1 Predator UAVs above Iraq.

12 February 2010 a firefight with suspected members of Kata'ib Hezbollah occurred 265 km (165 mi) southeast of Baghdad in a village near the Iranian border, the U.S. military said. Twelve people were arrested, it said.

The joint security team was fired upon by individuals dispersed in multiple residential buildings ... members of the security team returned fire, killing individuals assessed to be enemy combatants," the military said in a statement. The Provincial Iraqi officials said many of the dead were innocent bystanders, and demanded compensation. They said eight people were killed.

On 13 July 2010 General Ray Odierno named Kata'ib Hezbollah as being behind threats against American bases in Iraq. "In the last couple weeks there's been an increased threat ... and so we've increased our security on some of our bases," Odierno told reporters at a briefing in Baghdad.[45]

In July 2011, an Iraqi intelligence official estimated the group's size at 1,000 fighters and said the militants were paid between $300 to $500 per month.