Future of the Political Islam in Turkey 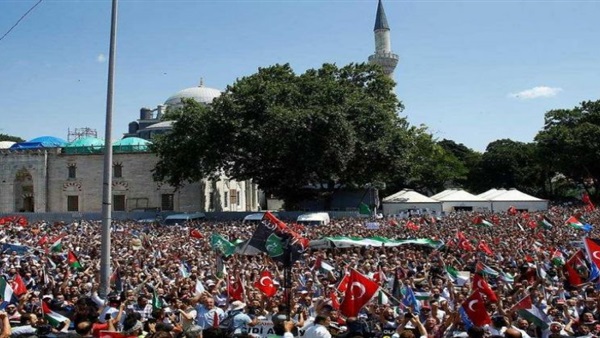 Mustafa Salah
طباعة
The growing
influence of the ruling Justice and Development Party (AKP) in Turkey since it
has assumed power in November 2002 posed many questions about the fate of the
new Islamic ascension in a secular-based country that was founded by Mustafa
Kemal Ataturk in 1923.


Atatürk
applied the theory of secularisation on the Republic of Turkey in all spheres
of life to create a national state on the remains of the Ottoman empire.
However, through the democratic sphere created by Atatürk, the Islamists seized
the opportunity to seek power in the wake of the World War II.


In 1945,
former Turkish President İ smet İ n ö n ü announced
that an opposition political party should exist to activate the political life
in Turkey, aiming to defuse a state of political tension created in the country
at that time. So, the Islamic-rooted parties exploited the secularists-tailored
democracy to “reinstate the Islamic empire.”


Inside the
Kemalist ruling Republican People’s Party (CHP), voices of opposition raised
and led by four parliamentarians: Celâl Bayar, Adnan Menderes, Fuat Köprülü ,
Rafiq Quartlan. They founded in 1946 the Democrat Party (DP), which was
joined by a large numbers of politicians Turkish elites; it had become a
popular desire for change. During the 1946 parliamentarian election, DP
garnered 61 lawmakers and later was joined by 47 others dissented from the CHP.


In 1950, the
conservative DP won the parliamentary election for the first time with
landslide victory after receiving 403 seats out of 482, beating the ruling CHP.
Consequently, Celâl Bayar became the President of Turkey, while Adnan Menderes
was appointed as the Prime Minister, forming a new shape of the government
carrying some of old political, cultural, and social ideologies of the Ottoman
empire.


In spite of
the fact that the DP was not an Islamic-rooted party, its leaders were known of
their Islamic tendency. Over ten years of his tenure, Menderes issued a
number of decisions; he decreed that the Islamic Adhan (Islamic call for
prayer) and Quran (Muslim’s holy book) should be stated in Arabic language not
only the Turkish one. He also opened the first institute of Shari'a teachings
(Islamic rules) in 1923, and opened centres of teaching the Quran, in an
attempt to remove the identity of secular Turkey.


Like other
Islamists, current President Recep Tayyip Erdo ğ an exploited “ secularism ” to reinstate the Islamic life to
Turkey, although he does not openly talk about his hostility to the secularism.
Erdo ğ an re-opened Imam Hatip schools, the secondary education
institutions to train the governmental Imams. He also lifted the headscarf ban
in the Universities after a long battle before the state’s constitutional court
ended in 2014, abolishing Atatürk’s educational reforms.


Furthermore,
Erdogan strengthened his constitutional power when a public referendum was
conducted on April 17, 2017 to broaden his authorities as a President. A total
of 18 articles were amended; most notably giving the President the full powers
of the executive authority [after it was in the prime minister’s duties] and
the leadership of the army, and the abolishment of the prime minister post.
Also the amendments stipulate that the president shall not disassociate his
political party, and the number of parliament members shall be increased from
550 to 600 parliamentarians.


The Turkish
President also announced that the parliamentary and presidential elections
would carry out on July 24, 2018 despite that the elections were due to convene
on November 3, 2019. The early election was seen as a way to pass
above-mentioned amendments.


Erdogan’s
tendency to change the Turkish secular policies appeared in 2014 when the
Council of Higher Education introduced the Sunni teachings of Islam into the
governmental schools. He also allowed 25 percent of the valedictorians to enrol
into Imam Khatib schools. Moreover, his ruling regime approved the religious
marriage.


In November
2014, he stated that Islam had limited the role of women in society in
“motherhood”, alleging that men and women should not be treated equally as “it
contradicts human nature.”


“Secularism
means being tolerant to all faiths, the state is neutral in matters of
religions and stands from the same distance towards all religions and beliefs.
Is this un-Islamic? Or does it not contradict with Islam? But there are those
who try to reinterpret this by introducing new concepts. In the past years, we
always regarded secularism as anti-religion; secularism became an equivalent to
atheism. We said no. Secularism means that the state guarantees freedoms to all
groups, without privileging one over the other. That is our understanding of
secularism," Erdogan told al-Arabiya net in an interview on February 18,
2017.


In his book
“The Rise of Political Islam in Turkey” published in 2008, senior Political
scientist at RAND Corporation Angel Rabasa predicted that Erdogan’s Islamic
ruling party has a secret anti-secularism agenda to “islamize the Turkish
society” after assuming power. Rabasa also predicted that Erdogan would take
control over both legislative and executive powers and his ruling party would
be authorised in appointing judges, heads of universities and administrators.
He also will control the army. At the level of foreign policy, Rabasa said that
the ruling party will not seek membership of the European Union (EU) but will
seek to establish a new (Islamic bloc) in the world. Most of Rabasa’s expectations
came true.


So, Turkey is
witnessing a coup against the secularism by Erdogan; mosques of Turkey are open
all day and veiled women assumed positions in judiciary, police and army. He is
adopting a long-term strategy of “Islamizing” the state and society, even if he
did not speak out his hostility to secularism.


In case that
the ruling AKP won in the general elections, it will retain its influence of
newly-applied Islamic decisions on the state, particularly after the 2016
Turkish coup d'état attempt against Erdogan, which resulted in massive
detention campaigns against the oppositions, violating the human rights.


On July 15,
2016, a faction of the Turkish Armed Forces organised a coup to take control
over the state’s institutions, but they thwarted by forces loyal to Erdogan.


Erdogan’s opponents could form an alliance
against his increasing influence. Since he has declared the early elections,the
opposition parties named many rivals to compete against him the presidential
election, raising the possibility of narrowing its popularity that saw a
decline during the constitutional amendments on April 14, 2017.


As per the
referendum results, 51.4 percent of Turkish people voted for the referendum against
48.6 percent voted “no”. The narrow difference in the results showed that AKP
popularity declined particularly in Ankara and Istanbul.


3- Escalation of social and political
tensions


Anti-Erdogan
protests and demonstrations were staged following the 2016 coup d'etat attempt,
which he exploited to get rid off his rivals. The political tensions were
escalated after the massive arrest campaigns launched against the opposition;
more than 50,000 people were arrested and around 150,000 state’s employees were
suspended.


More than 170
media institutions and publication houses were closed since the state of
emergency has been declared in July 2016, following the coup d’etat attempt.


The roots of the Political Islam in
Turkey


Islamic
movements did not leave the political arena even after the declaration of the
secular Republic of Turkey; Turkish Sufi movements had a significant role in
the history of the Turkish political Islam.


The 1924
Constitution of Turkey allowed Sufi movements to work freely to an extent that
Sheikhs of such movements had seats in the parliament, including Sheikh
Abdel-Halim, head of Konya Madrasas , and Sheikh Jamal el-Din for Bektashi
Order in Kır ş ehir city.


Consequently,
Kurd Sheikh of Sunni order Sheikh Said Piran tried to stage a rebellion
known as “The Sheikh Said Rebellion” in the eastern and south-east parts in
Turkey against the secular regime. However Piran’s attempt failed and ended by
his arrest and execution by hanging. After a series of confrontations, those
movements worked secretly and entered the politics scenes behind the closed
doors.


Flashing back
to the Ottoman Caliphate, the Sufi movements played an important role in
politics and society since the 3rd century AH (816 CE – 913 CE); they had great
influence over the governing bodies in the state as Sufi men were participating
in wars and conquest campaigns for the Ottoman army, achieving many victories.
Major Sunni spiritual orders of Sufism movements include the Naqshbandi,
Rifa'iyah, Mawlawi, and Bektashi. In addition, the Nursi order, which was
founded by Aziz Üstad Bediüzzaman Said Nursi and considered one of the most
influential sufi order in Turkey.


Nowadays, the
islamic parties and movements see that the Turkey identified secularism in an
excessive way to extent that “it downsized the religion’s role in the society.”


In January
1970, Necmettin Erbakan- who was Prime Minister from 1996 to 1997- founded a
new Islamic-based National Order Party (MNP), which focused on the religious
teachings and freedom of religion. The party was defiant to the secularism.


Erbakan
voiced his desire to link Turkey culturally and historically with Muslim and
Arab countries. He called upon all Muslims to unite under the Islamic
slogans raised by his party. However, Turkish authorities accused him and his
party of “violating the laws regulating the partisan affairs and the secularism
principles” on March 5, 1971. Two weeks later, the Turkish constitutional court
ruled to ban the party's activities and to shut down its headquarters
nationwide.


After banning
his party, Erbakan founded a new one. On November 12, 1972, he announced the
formation of the National Salvation Party (NSP), which was chaired by
Süleyman Arif Emre. The Salvation Party was not different from The National
Order Party. But NSP was not openly critic against the secularism.


The NSP
successed to create an alliance with other different Islamic parties, namely
the Kemalist CHP in 1974 and with the AKP in 1975. In 1978, Erbakan was
appointed as the Prime Minister deputy, while many of his supporters assumed
ministerial positions. So Erbakan was the first Islamist leader came to power
after being elected as Prime Minister.


Three years
after the 1980 Turkish coup d'état, another party called Motherland Party
(ANAP) was founded and led by y Turgut Özal. The ANAP control over the power
until 1989, when the parliament elected Özal as the President of Turkey. After
assuming the power, a state of division was created among the party members,
forming two groups; the first İ slamic conservative group led by
Süleyman Gündo ğ du Demirel and the second Liberal secular group led by Mesut
Y ı lmaz.


Another
Islamic-rooted conservative party [True Path Party (DYP)] won the election in
1991, forming a coalition government between the DYP and CHP. However,
after the death of Turgut Ozal in 1993 under mysterious circumstances, the
Welfare Party (RP) was formed in July 1983 and considered an extension of the
Islamic National Salvation Party. the RP and DYP took control over power
despite the ban imposed on the Islamic parties since 1980 coup d'etat in 1980.


Due to
Erbakan’s several anti-secularism decisions, the Turkish authorities banned the
Islamic-based parties; RP activities were banned by a court ruling in
accordance with 1982 Law over charges of “seeking to apply the Sharia and
establishing a “retrograde regime.” As per the court ruling, Erbakan along with
members of his party, including Erdogan, were detained and banned from
practicing the political rights for 5-10 years.


Since then,
the secular state, particularly the military institution, has not expected that
it would be fought by RP, which is later turned into the Justice and
Development Party (AKP). Since the AKP has assumed power in 2002, it was
working on “Islamisation of the state.”


4- The
Turkish new role in the Middle East under the new Ottoman Concept by Mustafa
Saleh: http://democraticac.de/?p=46797


6- The rise
of Political Islam in Turkey by Ahmed Samir: https://tipyan.com/the-rise-of-political-islam-in-turkey/