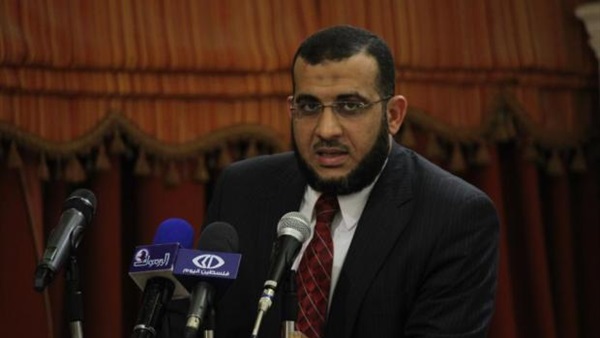 He permits iftar on demonstrations, and calls for bombing homes and killing judges

Akram Kassab, a member of the Association of Muslim Scholars, which is labeled as a terrorist organization by Qatar-boycotting countries (Egypt, Saudi Arabia, United Arab Emirates and Bahrain), graduated from Al-Azhar's Faculty of Islamic Call in 1992.

Kassab, who is seeking sedition in the region, worked in preaching, teaching and fatwa (edict based on Shariah) at the Ministry of Waqfs (Religious Endowments) between 1992 and 1994. He moved to Qatar, where he worked as prayer leader until 2004.

He has supported terrorism on all levels. He overtly instigated violence. Kassab, who is Istanbul-based, presents a show broadcast on Mekameleen TV, and is office director for Sheikh al-Qaradawi, the president of Association of Muslim Scholars.

Kassab permits the bombing of homes in Egypt, citing that security forces should be killed. He issued a fatwa that whoever bombs his own home during a security inspection would be "martyred". This is an elaboration of al-Qaradawi's fatwa, in which he permits a suicide bomber to kill civilians in what he labels as countries of "unjust regimes".

Al-Qaradawi's office director considers the killing of judges to be "lawful duty" as well as a "necessity". He issued that fatwa after death sentences against leaders of the Muslim Brotherhood.

"The unfair death rulings should be retaliated. The judges and the military should be killed." he said.

Kassab opposed fatwas by the Muslim Brotherhood clerics, who did not permit civil disobedience and strike during the rule of Mohamed Morsi. He said civil disobedience is nonviolent deliberate violation of laws, or government decrees, or a foreign occupation. He described it  as a sort of civil resistance.