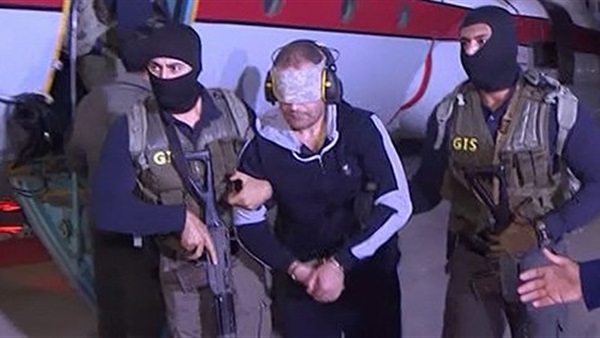 The detained terrorist Tariq Abu al-Azm nicknamed Abu Hamza is considered one of the most polarized to the takfiri thought and influence although he is not famous in the media.

Abu al-Azm was born in the city of Mahalla al-Kobra in the western province of Al-Gharbia in 1970. At first he did not show any features of takfiri thought. He graduated from high school and went to the military academy. He graduated as an officer of the armed forces. He traveled to receive military courses in the United States. He rose to the rank of a major and was responsible for one of the air bases of the Egyptian Air Force.

The first spark that pushed him to the takfiri thought after his return from the United States was his shock of the features of Western civilization and what he saw as religious deviation. He began to attend some lectures and religious lessons, where he learned some extremist ideas.

Abu al-Azm was not convinced of the principles he learned from his elders, but he saw that they were deficient in their reliance on religious legislation and not practicing practical jihad. This opened the way to research in the literature of the jihadist trend.

Abu al-Azm was the first to take the path of radicalism in 2002. He was accused along with a number of members of what later became known as Jundallah (the al-Qaeda branch in Gaza), of planning a number of operations on Egyptian territory. These attempts include targeting US ships in the Suez Canal, and the blowing up of the American Embassy in Cairo. The competent court issued a decision to release Abu al-Azm after the case was saved. Abu al-Azm was then separated from the military establishment. He was detained with his companions as part of a state an emergency announced in Egypt. He was released in March 2011 weeks after the outbreak of the January 25 Revolution.

In October 2012, Abu al-Azm was re-arrested along with 43 other defendants in case No. 333, known as "Nasr City Cell" on several charges. He was not a regular prisoner, but provoked disturbances inside the prison, including demonstrations, hunger strikes and attempts to attract young people to follow the takfiri thought, most notably Muhammad Jamal al-Kashif, who established a network of arms transfers across the western border with Libya and the terrorist Hisham Ashmawi, who embraced takfiri ideas through Abu al-Azm.

Tariq Abu al-Azm is now serving a life sentence after being convicted in the Nasr City cell case of establishing a group following the takfiri ideology, and attacking the state's individuals and institutions.