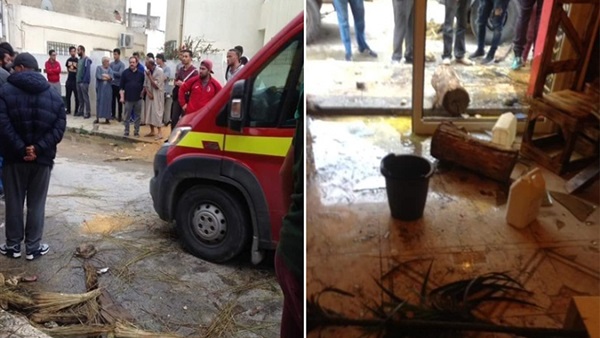 Rades, southeast of Tunis, has witnessed an unfortunate incident. A group of Salafists stormed a café and almost burned it to the ground for opening during fasting-hours in Ramadan.

This was considered by a number of activists as an assault to undermine secular values in Tunisia and a message that in case the Muslim Brotherhood did not win in the upcoming election, people will have to deal with Salafists.

Eyewitnesses were quoted by Ultra Tunisia newspaper as saying hundreds of extreme Salafists attacked the café and set it on fire, which was later confirmed by the Shems FM radio.

National Security spokesman Walid Hakima has denied that Salafists attacked the café, claiming the incident was a brawl between a group of young people who were drinking coffee at the café, which developed into a fight that damaged the café.

“Hundreds of Salafists intentionally attacked the café while shouting ‘Allahu Akbar’,” Tunisian lawyer Mounir Batour said. “After the café’s owner closed the roller shutter, Salafists poured gasoline under it to burn the café and all the people in it, and when the owner opened the metal shutter to get people out, they were assaulted with sticks and swords, and the waiter was thrown out of the first floor’s roof.”

The lawyer stressed that the café’s incident is considered a terrorist assault that the Interior Ministry is trying to cover for and present as a battle against deviance.

A statement by the Higher Committee for Human Rights and Fundamental Freedoms has criticized “practices against individual freedoms by storming into cafes or threatening people who do not fast.”

The statement further condemned statements and speeches by politicians and officials who seek to impose control over people’s beliefs and actions, stressing the importance of respecting the Tunisian constitution.

The committee also called upon the Tunisian judiciary to hold whoever violates individual freedoms accountable, especially rights endorsed by the constitution.

For his part, Tunisian political analyst Lassad Bin Ashur said what the café in Rades witnessed was nothing but terrorism by the hands of extremists. “A natural result to the Interior Ministry’s campaigns against cafes during Ramadan,” he added.

He added that acts by Youssef Chahed’s government have encouraged extremists to recreate terrorist campaigns in the public, in reference to the terrorist incidents under the Muslim Brotherhood’s Troika government.

Observers say Salafists act as a Muslim Brotherhood scarecrow, as ahead of the incoming election next October, they try to depict the terrorist organization as the moderate side.

Tunisian politician and co-founder of the Ennahdha Party Abdelfattah Mourou has estimated the number of Salafists at around 20% of mosque-goers, taking into account that the country has around five thousand mosques.