The Lies of Nicolas Beau and the Qatari lobby

The Reference presents the most important elements of this attack, with perfect transparency, so that the reader discovers for himself the enormity of the contradictions in the words of the Le Monde Afrique website.

Nicolas Beau thus claimed that CEMO was founded to support the positions of Egypt and the United Arabs Emirates against their enemies and accused Abdelrahim Ali of attacking the Zionist lobby and alliance with Marine Le Pen!

Beau questioned the credibility of the Center, saying: CEMO is trying to appear to have the support of experts and important specialists”.

Beau indicates that Abdelrahim Ali is obsessed by the idea of Brotherhood Conspiracy against his country and Europe.

Beau asks a question: “Why did Abdelrahim Ali open his center in Paris? He responds by saying that he fears (means Ali) that France will become a field of action for the Muslim Brotherhood International Organization... he continuous we have not seen any cadre of the Brotherhood members who have settled in Paris during this period and having had activities or having founded seats on the banks of the Seine . Nicolas Beau and Le Monde Afrique website are finished their words, but we will respond.

Two years ago, July 2017, Nicolas Beau came to my office with a teenage girl, to ask me take care of the girl on her trip to Cairo, but I did not like him; why? Because he has only built his fame on a book entitled: “Ugly Qatar.. This friend who wants evil for us”, its French title is “Le Vilain petit qatar..Cet ami qui nous veut du mal”.  I have tried to talk about his book and its secrets that he addressed but Beau has eluded, as if he escaping, tricking to not talk.

Few weeks after the first meet, Nicolas Beau has called me back and asked me to meet for lunch. In the restaurant on Marceau Street, I and Dr. Ahmed Youssef, the director of CEMO, have met Beau. 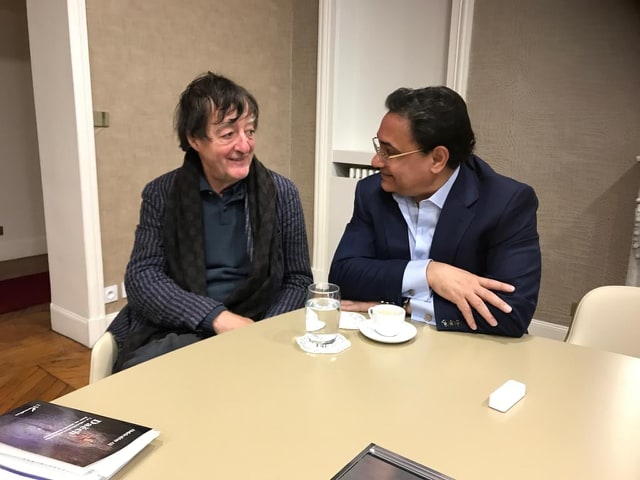 He asked me to help him to go to Cairo, and held several interviews with senior officials, promising me he is ready to abide by the agreed questions, mentioning that he was fully understanding the responsibility of the Egyptian regime to curb terrorist movements and fight their armed organizations.

I promised him to try in the appropriate time, and he promised us to cooperate with us in CEMO, in addition to granting us the right - in the presence of Dr. Ahmed - to republish his articles from his site to the Reference, unlike the rest of the writers, we have contracts with them. 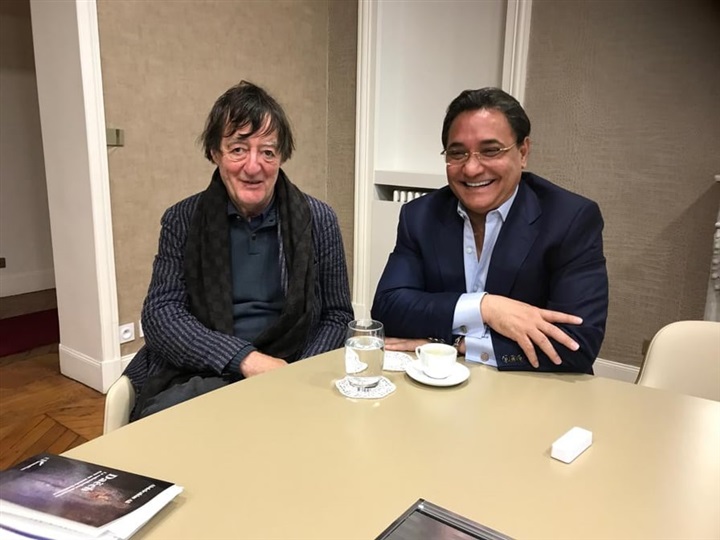 When I have offered to made a contract with him he mentioned a project he need to complete it, so it may prevent him to cooperate formally through a contract written with us.

Nicolas Beau has mailed me to ask about the previous mentioned interviews, so I respond the same answer, and he should not be rushed. It is still too early.

Le Monde Afrique’s editors do not mentioned all these meetings in their criticize to me, and do not mentioned his visit to me in my office, approved by the attached pictures, do not even mention that I have given him two of my books.

It is strange that Le Monde Afrique accused me of obsession with conspiracies. They also accused me of saying Al-Jazeera is an Israeli channel, ignoring that the first to utter this is Nicolas himself in his book; as the man clearly said that Al-Jazeera did not the idea of Prince Although he was an intelligent man, but the channel was a natural result of the assassination of the Israeli Prime Minister Yitzhak Rabin in 1995. 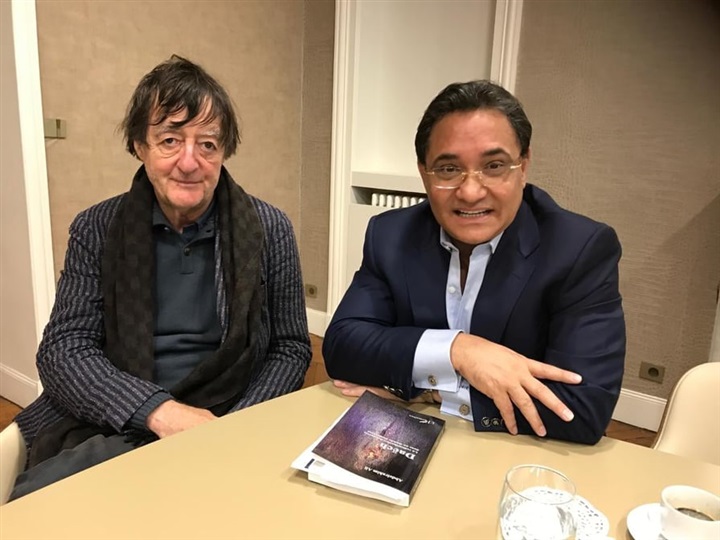 The question is that when we looking for at the site headed by Nicolas, we have not found any trace of the statements contained in his book, which he has embellished with a number of his articles, as if the clear and explicit accusations of Al Jazeera have been completely omitted from the site!

We are used to not rushing to answer such questions because it contain ambiguity and imprecise. We will not answer before we put our hands on all the facts. The position of the man has changed and turned 180 degrees he now attack anyone who criticize the “ugly Qatar” according to his book title.

The man who accuses us of being “obsessed with conspiracies” forgets that he invented the conspiracy in his book “Ugly Qatar” in which he said: “Doha, which was decided in 1993 under the leadership of Prince Hamad, sold gas to the Jewish state, had an only way to direct relationship with Washington, the way is Tel Aviv” adding that Prime Minister Sheikh Hamad bin Jassim was competing  Sheikh Tamim.  Jassim was never sympathetic to the Palestinian case, and quoted a businessman close to Bin Jassim said: he was yell for the Palestinian officials saying these fools bothers us.

The editor of the Le Monde Afrique website says that Abdel Rahim Ali always affirms that “Israel and US are crafting conspiracies to destabilize the Arab countries in the region and that their conspiracies are aimed that the Muslim Brotherhood in Tunisia, Egypt, Yemen and Libya ruled these countries, adding, Al-Qaradawi is a Mossad agent. 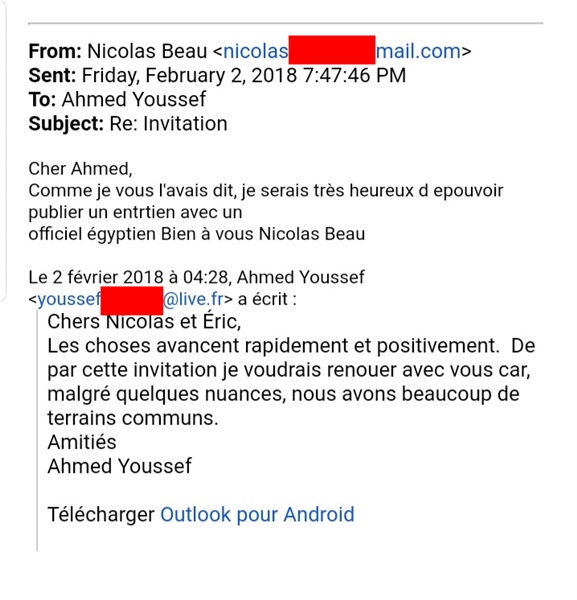 What did Nicolas Beau say in his book? The editor-in-chief of the Le Monde Afrique website has addressed the role of the CIA in training cadres and specialists in the Internet and psychological warfare, the link with Israe, including the role of former Israeli Foreign Minister Tzipi Livni, who was a regular visitor to the Qatari Emiri Palace.

He said in his book “Since the opening of the Doha office of the Israeli diplomatic representation, I used to receive Shimon Peres and Tzipi Livni, the leader of the right-wing Kadima party, which was pleased to visit the Palace”.

This is the spirit of the conspiracy filled the book. According to the editor-in-chief of the Le Monde Afrique website, in September 2010, the search engine “Google” organize in Budapest a seminar “Internet Freedom Forum”, and after the seminar the former US Secretary of State Madeleine Albright launched Maghreb and the Middle East bloggers Foundation, preceded and followed by series of Forums, one of which, was in February 2006, included Bill Clinton, his daughter, and Condoleezza Rice, and then a secret document entitled “Projects for Change in the Arab World” was agreed upon.

In January 2011, the “Tunisian” was launched which was administered directly from the United States; Beau confirmed that Qaradawi was an agent!

The editor-in-chief of Le Monde Afrique based his article on “ugly Qatar” which includes remarkable secrets interviews. The most important interviews with Asmaa Bin Qadim, the ex-wife of Qaradawi, who assured that Al-Qaradawi secretly visited Israel in 2010, and he was behind changing the perception of the terrorist lists, and he was no longer barred from entering American territory. Would Nicolas Beau refer something? 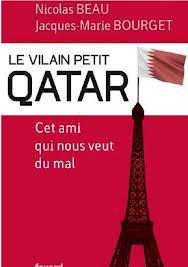 All of the above was just the first episode in the Le Monde Afrique's file, and its editor-in-chief, Nicolas Beau. In the next episode we will explain the reasons why Le Monde Afrique and Beau launched attack at this time; when 50 PMs signed a petition demanding that the Muslim Brotherhood be considered a terrorist group. In addition to, one of the most dangerous men of Qatar be tried in Paris on charges of corruption.

I will answer the following questions: Why did former Tunisian Interior Minister Lotfi Ibrahim accuse Nicolas Beau of receiving 700,000 euros from Qatar? Why Nicolas Beau did in 2019 delete his articles that criticized Qatar from the website? Why did the site keep only 3 articles, all for Doha?