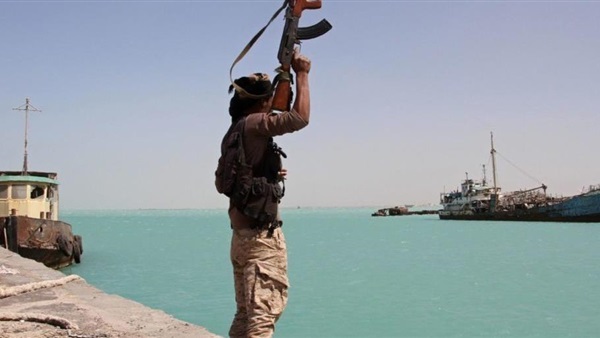 The equipment carried to Yemen by the Iranian ship was used in attacks by the Iran-aligned Houthi militia on Saudi Arabia, they added.

Theoretically speaking, the containers should have been handed over to objective authorities in the light of UN-brokered agreements between the Yemeni government and the Houthi militia.

Yemeni sources denounced the delivery by Iran of arms and military equipment to Yemen. This delivery, they said, would make things even worse in the war-torn Arab state.

The same sources added that the arrival of Iranian arms in Yemen sabotages understandings reached by the Yemeni government and the Houthis as well as torpedo the Stockholm agreement between the two sides.

The Iranians use Yemen's Houthis in their showdown with the US, especially after US President Donald Trump decided to send 1,500 American troops to the Middle East as tension continues to pile up in the Arab Gulf.

Yemeni President Abdrabbuh Mansur Hadi sent on Friday a letter to the United Nations in which he gave UN Special Envoy Martin Griffiths a chance to end what he described as the UN envoy's bias toward the Houthis.

Hadi accused Griffiths of undermine the prospects of peace in Yemen. He warned that he would stop receiving the UN envoy if he continued to demonstrate this bias.

"I am no longer able to tolerate the violations of the UN envoy," Hadi wrote in his letter. "These violations jeopardize the prospects of peace in Yemen."

The Yemeni president especially criticized Griffiths' treatment of the Houthis as an elected government.

He said the UN enovy is not fully aware of the nature of the conflict in Yemen, noting that Griffiths might not be an appropriate person for his job.

Tensions flared between the Yemeni government and the UN envoy after the later backed the Houthis' unilateral withdrawal from three Yemeni ports, including the strategic port of Hudaydah earlier this month.

Griffiths even backed the Houthis' unilateral withdrawal from the three ports at the UN Security Council. He described this withdrawal as a "sign of hope".

The Houthis launched a drone attack on an arms warehouse at Najran Airport, southwestern Saudi Arabia, near the border with Yemen.

The attack, the coalition said, did not cause any human casualties.

He added that the Houthis especially target civilians and foreigners.

On Monday, the Saudi air defense force intercepted two Patriot missiles launched by the Houthis on in Taif, only 80 kilometers away from Mecca.