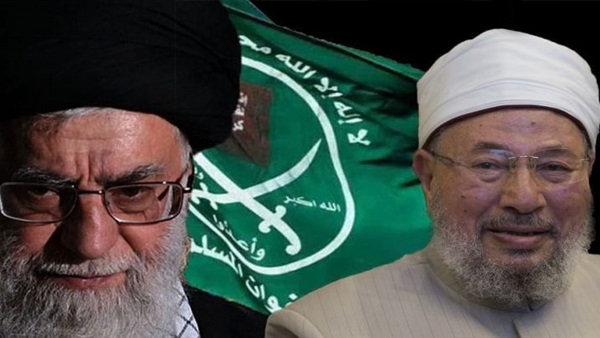 In the tangle of relations and interests between Iran and the Muslim Brotherhood, Iranian Foreign Minister Mohammad Javad Zarif’s rejection of US President Donald Trump's decision to classify the Brotherhood as a terrorist group has revealed more of the “benefit” relationship between the followers of Ruhollah Khomeini and the followers of Hassan al-Banna. What is the nature of that relationship? How does each side support the other? And what destiny will end the mullah regime and the treacherous Brotherhood? These and other outstanding questions were posed to Iranian affairs expert Dr. Mohamed Banaya.

How do you see Iran's rejection of America's classification of the Muslim Brotherhood as a terrorist organization?

Iran’s rejection of America's classification of the Muslim Brotherhood as a terrorist organization, shown by the position of Zarif, comes within the framework of the axis of political Islamism, which brings together Qatar, Iran and Turkey on the one hand and Islamist political groups, foremost among them the Muslim Brotherhood, on the other.

The rejection also came in defense of Iran’s interests. The United States recently classified the Iranian Revolutionary Guards as a terrorist organization. Iran does not want these designations expanded, because the Brotherhood represents a strong role in supporting the regime of Iranian leader Ali Khamenei. The relationship between the two parties is based on the principle of political service.

How does the Brotherhood support the Iranian regime?

The Brotherhood’s support of Iran is represented in a network of strong and complex political, economic and military relations in several countries and regions of the world. Under the US sanctions on Tehran, Iran’s leader will resort to the Brotherhood's financial networks to support Iran economically and financially to withstand the Trump sanctions.

The Brotherhood has hidden networks for money laundering and supporting the economies of the countries in which it holds part of the power. This is what happens in Erdogan’s Turkey, with the international organization of the Muslims Brotherhood supporting the Justice and Development Party (AKP) and the survival of the Turkish economy. The Brotherhood had launched a campaign to support the Turkish lira after it quickly collapsed against the US dollar.

How does the Brotherhood benefit from its support of Iran?

In other words, Iran is an important state for the Brotherhood in terms of economic support and protection, as well as the ability to resort to it in the event of supportive Arab regimes falling, as happened in Sudan, which made the Brotherhood more steadfast to support the mullah regime in Iran.

Iran has also served as a secret location to train and arm Brotherhood cells and provide intelligence, military, logistical support. The relationship of the Revolutionary Guards with the branches of the Muslim Brotherhood in Arab countries is proof of that. Iran has trained Hamas and provided them financial, political and military support, the same as it did with the Brotherhood-affiliated Islah in Yemen and militias in Somalia, Tunisia, Algeria and Iraq. A ship belonging to the Iranian Revolutionary Guards was confiscated in the Libyan port of Misrata, confirming this relationship. This means that the presence of the Muslim Brotherhood in a country means Iran’s presence as well and vice versa.

How do you see the future of the Brotherhood and Iran?

A strategic and organizational relationship. Whatever the US decision, Iran and the Brotherhood will expand their relationship more than ever.