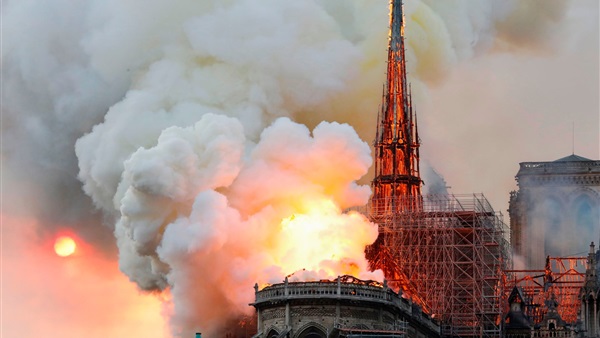 Thousands of Parisians watched in horror from behind police cordons on Monday night as a ferocious blaze devastated the historic Notre Dame Cathedral, destroying its spire and spreading to the historic bell towers.

Firefighters battled to contain the fire, which began at 5.50pm local time (16.50 GMT), with police saying it began accidentally and could be linked to building work at the cathedral.

The 850-year-old gothic masterpiece had been undergoing restoration work to help it better withstand the tests of time.

“Everything is burning,” André Finot, a spokesman for the cathedral, told French media. “Nothing will remain from the frame.”

Flames burst through the roof of the cathedral – one of France’s most visited places – and quickly engulfed the spire, which collapsed. The spire was made of wood and lead and was built during a restoration in the mid-19th century.

A huge plume of smoke wafted across the city and ash fell over a large area. No deaths or injuries were initially reported.

Buildings around the cathedral were evacuated, and the fire department said a major operation was under way. Police closed several metro stations and cordoned off roads by the river.

A cathedral spokesman said the entire wooden interior of the 12th-century landmark was burning and was likely to be destroyed, while the city’s deputy mayor, Emmanuel Grégoire, said emergency services were trying to salvage the artwork and other priceless items stored there.

“There are a lot of art works inside...it’s a real tragedy,” mayor Anne Hidalgo told reporters at the scene.

On the left bank of the Seine thousands gathered to watch the fire blazing as orange flames towered from the roof. The crowd could hear loud bangs as part of the roof appeared to collapse.

Fire trucks could be seen speeding through Paris towards the scene on the Île de la Cité, the island in the Seine at the heart of Paris where the cathedral is located.

Some people in the crowd were crying, and others started singing hymns. “I can’t believe what I’m seeing,” said one older woman, who did not wish to give her name. “If this burns down, it’s a piece of history that goes.”

Alexis, 35, said he had hurried to the scene after seeing the first images on TV. “I rushed down as soon as I saw what was happening. I never thought it would be this depressing.”

Over the course of an hour, he had watched as the flames rose from the roof and sections of the roof collapsed. “When I got here the roof was still there. I slowly watched it fall.”

Camille, 20, from Normandy, a history student at the Sorbonne, stood at the police cordon. “There’s a feeling of total sadness and also anger. It’s our heritage. People in the crowd have been singing hymns. Whether you’re Christian or not, part of our history is going up in smoke.”

A 55-year-old furniture restorer, who did not wish to give his name, said he had arrived at the start of the fire and had watched the flames move from the back of the cathedral towards the bell towers.

Some in the crowd said they felt helpless, watching flames spreading across the building. The fire brigade used cherry pickers to spray the building with water from beyond the bell towers.

A large crowd, many in tears, had gathered on the neighbouring Ile St Louis, just across from where orange flames and a towering cloud of smoke billowed into the sky.

“We are staying just down the street and heard the sirens,” said a visibly distressed Fred Phelps, 72, from Sebastopol in Sonoma County, California, who was in Paris on holiday with his wife Diane, 71, and had booked a guided tour of the cathedral and tower for Wednesday.

“It’s one of the things I wanted to see before I died,” Phelps said. “We saw what was happening and we both welled up. It’s terrible, just terrible. And to see the face of the Parisians, and hear the emotion in their voices. We don’t understand French, but we understand this. We’re both very moved.”

Marie-Anna Ecorchard from Morbihan in Brittant, visiting her children who are working in Paris with her husband Louis, said she was on the Ile St Louis on a cafe terrace when she saw the first plumes of smoke rise into the air at about 6.50pm.

“It’s dreadful,” she said. “We’ve seen people sobbing, tears pouring down their faces. This is part of the heritage of Paris, not just of Paris but of all France. It’s just terrible to see such a magnificent building go up in flames. You feel it almost physically.”

When the cathedral’s spire collapsed soon after 7pm there was “like a huge gasp, a collective cry” from everyone watching, Ecorchard said. “What can you say? Seeing it, just across the river, it’s almost like watching a person suffer ...”

Alice Lohr, 26, a lawyer from Paris, said she was “immensely sad. This is a great historic monument, part of the beauty of Paris, part of the history of France. It’s literature, it’s Victor Hugo, musical theatre, the Hunchback - it’s just such a big thing in your life.

The cathedral dates back to the 12th century and played a role in Victor Hugo’s 1831 novel The Hunchback of Notre-Dame.

“When you are a Parisian and you love Paris, this is like a body-blow,” Lohr said. “It’s actually quite hard to describe how it feels. Terribly, terribly sad.”

Emmanuel Macron cancelled a planned speech to the nation in light of the “terrible fire”, according to an official at the president’s Élysée office.

He tweeted that his thoughts were with “all Catholics and all French people”. “Like all our countrymen, I’m sad tonight to see this part of us burn.”

Hidalgo, the mayor, tweeted that firefighters were still trying to contain the fire and urged residents to stay away from the security perimeter. “The Paris fire service is trying to control the flames,” she said.

France 2 television reported that police were treating the incident as an accident. The Paris prosecutor’s office said it had started an inquiry into the fire.

Notre Dame, which attracts millions of tourists every year, was in the midst of renovations, with some sections under scaffolding, and bronze statues were removed last week for works.