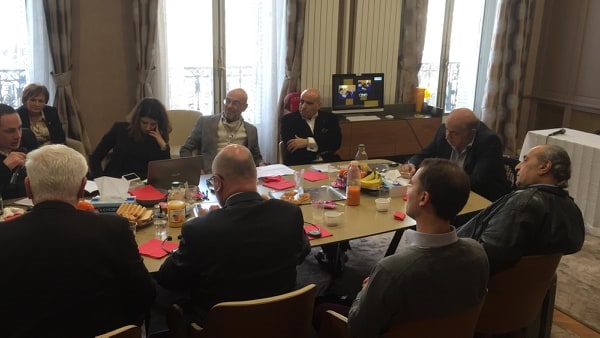 A French journalist said Wednesday that the Muslim Brotherhood uses human rights to win the hearts of people in Western countries.

Maya Khadara, who works for the French newspaper Le Figaro, added that the Brotherhood is based on the belief that Muslims have to spread Islam and sacrifice whatever they can to achieve this goal.

She added at a seminar on human rights organized by the Center for Middle East Studies in Paris that the Brotherhood started addressing the West a long time ago.

"The problem is that the Brotherhood believes it is more important than anything in the Western world," Khadara said.

She added that the Islamist movement succeeds in gaining presence in Western states by claiming to be the victims of Western imperialism.

This strategy, she said, was followed by Tariq Ramadan, a grandson of Brotherhood founder Hassan al-Bana.

Khadara noted that the Brotherhood works to impose its ideals in the Western states where it is active.

"It wants to Islamize Western countries and institute a caliph," she said. "This is the Brotherhood's utmost goal, something it is ready to do through jihad like the Islamic State does now."

Titled "Human Rights at the Time of the War on Terrorism and Social Crises: Between Idealism and Realism", the seminar is moderated by Ahmed Youssef, CEMO's executive director.

Speaking at the seminar – apart from Khadara – was also Member of the House of Deputies, the Chairman of the Center for Middle East Studies in Paris and the Board Chairman of al-Bawaba News Abdel Rahim Ali.

General Robert Pryce, the former commander of French troops in Yugoslavia, the former director of the Anfalid military museum, and the current president of the Napoleon Foundation, also spoke in the seminar.

Roland Lombardi from the French National Institute for Studies and Research of the Islamic and Arab Worlds also spoke in the same event.