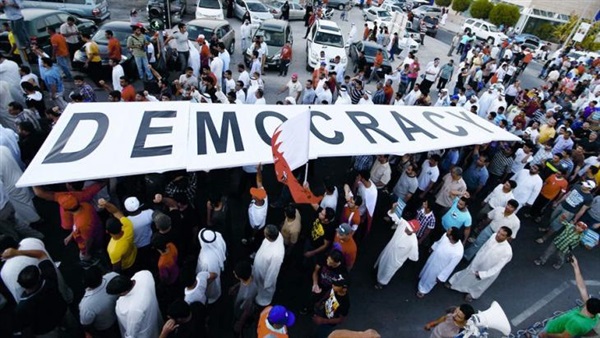 Democracy is undergoing an “alarming” decline across the world as a growing number of countries move towards authoritarian rule, according to the Freedom House think tank.

The US organisation’s annual “Freedom in the World” report found 2018 was the 13th consecutive year of deteriorating freedoms around the globe.

A total of 68 countries suffered a decline in political rights and civil liberties during the past 12 months, with only 50 counties registering any progress in these areas, it said.

“More authoritarian powers are now banning opposition groups or jailing their leaders, dispensing with term limits, and tightening the screws on any independent media that remain,” the report stated.

Experts also identified a troubling “crisis of confidence” in the US and Europe, where far-right populist forces are pushing against long-held democratic principles like the separation of powers, press freedom and the legal protection of migrants.

Hungary fell from “free” to “partly free” status in the past year. The report said Prime Minister Viktor Orbán had presided over “the most dramatic decline” in civil liberties ever charted by the organisation inside the European Union.

The organisation also offered a damning assessment of the health of US democracy, noting Donald Trump’s attacks on the rule of law and fact-based journalism. The report found his government had “improperly restricted” the rights of asylum seekers and immigration policies had become “excessively harsh or haphazard”.

“The greatest danger comes from the fact that American democracy is not infinitely durable, especially if a president shows little respect for its tenets,” said Michael J Abramowitz, president of Freedom House. “Anti-democratic rhetoric and the rejection of democratic constraints on power can be first steps towards real restrictions on freedom.”

In Central America, meanwhile, Nicaragua dropped to “not free” following a crackdown on anti-government protests, Venezuela was deemed to have held a “profoundly flawed” election, and in Brazil the newly-elected Jair Bolosnaro expressed his nostalgia for military dictatorship.

A growing number of governments have reached beyond their own borders to target expatriates.

Freedom House found that 24 countries around the world – including Russia, China, Turkey, Iran, and Saudi Arabia – have targeted political dissidents abroad with practices such as extradition requests, kidnapping and assassination in the past year.

Ethnic cleansing is another growing trend, with an increase in regimes making concerted efforts to alter the ethnic composition of their territory and attacks on freedom of expression has been aided by new tools in internet censorship and surveillance.

The present crisis has not arrived out of the blue, as Freedom House researchers concluded liberal democracy has been in retreat for over a decade.

“If the balance continues to tip towards dictatorship, the free societies that remain could find themselves isolated in a more dangerous and chaotic world,” said Sarah Repucci, a senior director at Freedom House.

A growing number of political scientists believe they have identified a strain of thought among voters that goes beyond traditional ideas of left and right; a strain that cuts across class, education, income and religiosity – even across different political cultures.

They believe understanding the concept of authoritarianism – and the authoritarian mindset of many voters – best explains the current crisis in liberal democracy.

Academics like Karen Stenner, Stanley Feldman, Marc Hetherington and Jonathan Weiler have made a convincing case that a sizeable proportion of voters have a fundamental fear of diversity and complexity, and a strong desire for order and unity in their society.

These citizens look at the world in a black-and-white way, holding a stronger-than-average need to distinguish between their society’s “in” group and various “out” groups and they are willing to disrupt established democratic norms if they feel the uniformity and hierarchy in their society is under threat.

Few people formally identify with authoritarianism. It is not a phrase that shows up on placards, tweets or Facebook posts. So when trying to identify voters with a predisposition towards it, political scientists don’t ask them directly about their political views. Instead, four simple questions are posed about attitudes to family and child-rearing.

Ms Stenner, whose 2005 book The Authoritarian Dynamic has become one the key texts in the field, believes the authoritarian mindset is a deep-rooted in all societies, even if western nations have chosen to ignore it in recent decades.

analysis conducted by Ms Stenner and social psychologist Jonathan Haidt on a massive 2016 survey of citizens living in 29 liberal democracies found that “about a third of white responders… proved to be authoritarian to some degree.”

“The evidence shows that about a third of the population across liberal democracies is predisposed to authoritarianism,” Ms Stenner told The Independent. “Basically, they favour what I call oneness and sameness over freedom and diversity.

“Importantly, authoritarianism is a latent individual tendency – it doesn’t necessarily always produce racial intolerance, moral intolerance, political intolerance, unless under certain conditions of perceived threat, especially when losing a sense of shared identity and beliefs, or losing confidence in leaders and institutions.

“We seem to have reached the edge of what those with this predisposition are willing or able to put up with in a liberal democracy,” she added. “Whether due to the immigration crisis, globalisation, the perceived loss of national identity, some people are saying, ‘I don’t want to lose who we are, our way of life’."

Authoritarians are not interested in right-wing economic ideas about the free market. Neither do they possess the classic conservative’s love of the status quo.

In the US, the child-rearing questions used to identify authoritarian citizens also proved the best predictor of support for Mr Trump in the 2016 election campaign.

As Mr Hetherington and Mr Weiler show in their book Authoritarianism and Polarisation in American Politics, the mindset may not be confined to any one political party, but it has become more intense among Republican voters in the US in recent years.

Dr Matthew MacWilliams, a political scientist at University of Massachusetts Amherst, has interviewed dozens of authoritarian voters in the US and Europe for his research.

He suggested the speed of change in the media landscape, aided by the bewildering impact of social media, has only fed authoritarians’ willingness to block out different views and listen only to the strongman’s promise of order.

“A lot of them are nice folks, they just have this disposition to authoritarianism” he explained. “There were actually relatively few I didn’t like. They’re just not very good with complexity. Confusion can make them feel less in control and therefore more threatened. And that’s a dangerous thing.

“They’re more likely to believe the idea that says there’s a threat out there. It’s what makes them put tremendous faith in certain rulers. And that is what allows despotic rulers to rise.”

Ms Stenner believes those who wish to uphold liberal democracy need to change the way they think, talk and treat a section of society they have been too quick to demonise as “deplorables,” as Hillary Clinton infamously described Mr Trump’s strongest supporters.

The political psychologist says the authoritarians’ views are “going to have to be more openly discussed, and must become part of the mainstream political conversation, or you’re going to keep getting this ugly, hysterical and outraged version of the conversation.

“If people can’t discuss their fears about immigration, if they can’t discuss the values they fear some newcomers might have, if they can’t discuss how much is too much – then these things get vocalised by people like Trump,” she added. “We have to understand this a fundamental aspect of society. It’s not intrinsically evil, but just another way of being human that we’ve often pretended doesn’t exist. A true democracy must ultimately attend to the needs of all its citizens.”