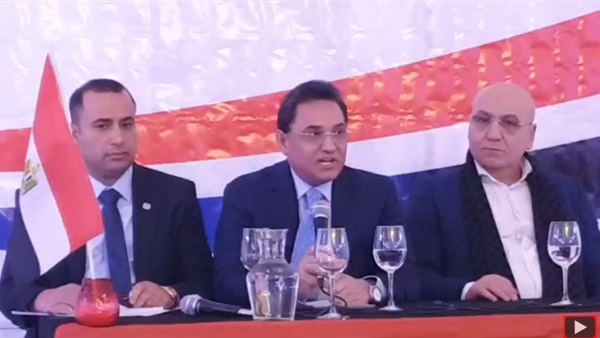 Egyptian MP Dr. Abdel Rahim Ali, Director of the Middle East Center for Studies in Paris and Chairman of the Board and Editor-in-Chief of Al-Bawaba News, sent a message to Egyptian young people abroad saying: "You are the one who can give your nation a lot, and Egyptians are awaiting the young people abroad to seek a common objective that contributes to the building up of modern Egypt."

Dr. Ali added during a seminar titled "Where will Egypt Head to, 8 Years after the January 25 Revolution" that the parliament and Minister of Youth are ready to work on this target. “Everyone is ready to take the initiative and cooperate with them,” he said.

Dr. Ali said that all offices “are open for the youth abroad to get all their project ideas for the best interest of Egypt.

Engineer Ashraf Ghali, head of the Supreme Council of the Egyptian Community in the Netherlands, invited journalist and MP Dr. Ali, saying: “"We need to know about the documented information you have. We also want to know about important issues like ISIS relocation to Europe, the situation of Copts in Egypt, and the Muslim Brotherhood’s status at home and abroad, as well as where Egypt is heading to on the 8th anniversary of the January 25 Revolution,” Ghali said, addressing Dr. Ali.

A host of Egyptian organizations registered in the Netherlands, in addition to Arab and Egyptian attended the seminar.