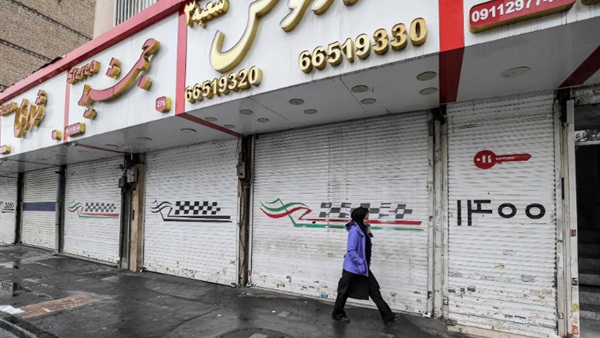 Businesses, shops and traditional bazaars in more than 50 cities across Iran were shuttered for a second day on Tuesday in what appeared to be one of the largest general strikes in decades, demonstrating the staying power of protests calling for the end to clerical rule in the country.

On Monday and Tuesday, footage shared online captured scenes of ordinary life brought to a standstill. Usually bustling centers of commerce and malls in small towns and big cities resembled ghost towns. Businesses across the spectrum, from medical practices to butcher shops to supermarkets, closed their doors and told their staff not to come to work, according to residents in Tehran, Isfahan and other cities, and videos posted on social media.

In the narrow alleyways and arches that shape the storied bazaars of Tehran, the capital, as well as Shiraz and Tabriz, row after row of stores, restaurants and other businesses had locked their doors, videos showed.

“This unity between all the trade unions is remarkable,” said Salar, a 40-year-old restaurant owner in Isfahan who asked that his last name not be published for fear of retribution. “This gave those of us who don’t go to protests the opportunity to show our solidarity with the people.”

Salar said he would bear significant financial loss from closing his restaurant for three days, but that it was worth it. He said his employees who needed their salaries to survive had also supported the boycott.

“We must all make sacrifices,” Ahmad, a 60-year-old taxi driver who took part in the strike, said in a message from Tehran. “Young people have given their blood and lives for this revolution; I am doing the minimum.”

Activists called for three days of strikes as the next phase of an uprising that began in September, after the death of Mahsa Amini, 22, in the custody of the morality police, who had arrested her on a street in Tehran for supposedly violating the country’s strict Islamic dress laws.

The strikes also come days after Attorney General Mohammad Javad Montazeri said that the feared morality police had been “abolished,” according to state media. The government has neither confirmed nor denied it.

As protests rolled across the country after Ms. Amini’s death, demonstrators demanded a wholesale overhaul of the Islamic Republic. They raised grievances against political and social repression, such as the mandatory hijab law and censorship, as well as corruption and economic mismanagement, which they said could only be resolved through regime change.

The government has greeted the protests with brutal crackdowns. On Tuesday, a spokesman for the judiciary, Masoud Setayeshi, said that five protesters had been sentenced to death on charges that they killed a plainclothes Basij militia member, Iranian state media reported. He also said that 11 other protesters, including three under the age of 18, had been sentenced to long prison terms.

Amid the protests, activists have been calling for nationwide strikes, but until this week, they had been scattered and limited to some cities, and had not materialized in such scale and scope.

Over the years, protests have occasionally broken out across Iran, including in 2009, 2018 and 2019, but those were crushed by the government. During the year leading up to the 1979 revolution, powerful merchants in bazaars, businesses, industrial workers and government employees launched widespread strikes, strangling the economy.

In response to the strike action this week, the authorities threatened to revoke licenses and arrest business owners. The head of the judiciary, Gholamhossein Mohseni Ejei, said security forces and the judicial authorities would identify and punish “rioters,” whom he accused of threatening shopkeepers and businesses to close, according to state media.

In an apparent intimidation tactic, messages of hate and threats were sprayed on the walls of closed shops in Isfahan, videos showed. On Monday, security forces sealed a restaurant and a jewelry shop owned by the Iranian soccer star Ali Daei after he announced on social media that he would join the nationwide strikes for three days, the Fars News Agency reported.

In Shiraz, the pharmacy of a well-known infertility clinic was also sealed because it was refusing to provide service, the Tasnim News Agency reported on Tuesday.

Sealing a business can result in the revocation of its license and the confiscation of the property.

While the economic effect of the strikes was not immediately clear, analysts said the action sent a message that the level of discontent was deep and widespread.

“Whether or not strikes are occurring has become symbolic of whether the protest movement is reaching a new phase,” said Esfandyar Batmanghelidj, chief executive of the Bourse and Bazaar Foundation, a London-based economic research institute focused on Iran. “For now, most of the economic pressure felt by the regime is arising from a drop in consumption. People are buying less owing to the uncertainty, and when strikes occur, shops are closed.”

Mr. Batmanghelidj said that in order to create real pressure, strikes needed to target production needs, interrupt industrial facilities and include widespread walkouts by blue-collar workers. But those workers and government employees risk losing their jobs.

The call to action, organized ad hoc by activists and spread via social media, included protests and acts of civil disobedience. It also commemorated what is known as university student day, Dec. 7. At campuses in several cities, students staged sit-ins and political art performances to mark the occasion, videos showed.

But many Iranians in cities big and small took to the streets chanting, “Death to the dictator,” and “For each person you kill, a thousand will rise,” videos showed.

Afshin Hojat, a resident of Rasht, said on Twitter that 90 percent of all businesses in his city were closed. When the heat broke down in his home and he called the plumber, he was told the plumber was not working for three days to support the uprising.