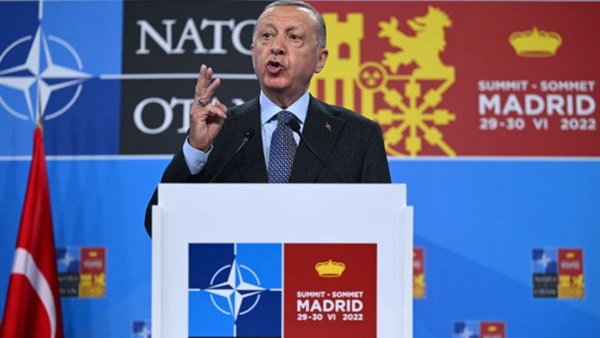 When Russian President Vladimir Putin celebrated his 70th birthday in October, he didn’t get any well-wishes from leaders in the West, with one notable exception: Turkish President Recep Tayyip Erdogan. While other NATO leaders have been giving Putin the silent treatment since he launched the war in Ukraine this year, Erdogan has done the opposite.

In recent months, Erdogan has engaged in a flurry of meetings and calls with the Russian president on joint energy cooperation, new business ties, deals allowing Ukraine to safely export its grain, and more.

For most leaders in the West, the Erdogan-Putin relationship has yielded several important diplomatic breakthroughs—but also a whole new raft of diplomatic headaches, as it runs headlong against Western efforts to punish Russia’s economy and isolate Putin on the world stage since he first ordered Russian tanks across Ukraine’s border in February.

The war in Ukraine has highlighted new divisions between NATO and Turkey. Erdogan has tried to position himself as the primary wheeler-dealer between Russia and the West and capitalize on how the war has weakened Moscow’s influence abroad, but in doing so he risks undermining already tense relationships with Turkey’s Western allies.

“Turkey wants to be seen as the country that can build confidence between Russia and Ukraine to finally get them to the negotiating table,” said Luke Coffey, a scholar at the Hudson Institute. “It’s also without a doubt that Turkey stands to benefit from a weaker Russia as a result of this war.”

The broad consensus among NATO members, according to interviews with multiple U.S. lawmakers, as well as U.S. and European officials, is that NATO can’t live without Turkey’s membership but living with it still comes at a cost.

“In a way, both Europe and Russia need [Erdogan], so he can always put his own interests first,” said Rachel Rizzo, an expert on European security at the Atlantic Council.

To an outside observer, Turkey’s policies on the war in Ukraine make it look like the ultimate geopolitical wild card.

Erdogan has condemned Russia’s invasion, refused to recognize its claims over Ukrainian territory, and provided vital military aid to Ukraine’s armed forces to beat back Russian military advances, including a fleet of armed drones that left the Ukrainian troops singing in joy (literally). But on the other hand, as the West unleashed punishing sanctions against Russia, Erdogan offered an economic safe harbor to the Kremlin, turbocharging economic ties between the two countries and opening talks to turn Turkey into a major hub for Russian natural gas.

But in the greatest tradition of the Great Game, Erdogan also helped broker prisoner swaps between Russia and Ukraine, including of British and American citizens fighting for Ukraine, and clinched a deal allowing Ukrainian grain exports safe passage past a Russian blockade through the Black Sea that alleviated price shocks roiling the global food and commodities markets.

Erdogan himself even boasted that he was the only leader that could bring Putin to the negotiating table, after the Russian president temporarily abandoned the grain deal and then came back to it this month, thanks to cajoling from the Turkish leader. “[Putin] doesn’t agree to open this grain corridor through others. But with me, when I call … straight away he opened the grain corridor,” Erdogan​​ said in an interview with a Turkish broadcaster.

But then there’s Turkey’s own perfidy. Erdogan has incensed NATO allies in recent years by strengthening military ties with Russia, including buying advanced Russian air defense systems over fierce objections from the Western alliance, and more recently by becoming the prime spoiler on Finland’s and Sweden’s plans to quickly join NATO in the wake of Russia’s invasion of Ukraine.

Within the NATO alliance, there’s a broad view that Erdogan is looking out for himself first and foremost, whether or not that happens to fall in line with the alliance’s interests, according to interviews with half a dozen U.S. and European diplomats, all of whom spoke on condition of anonymity to discuss sensitive matters more candidly.

But from Turkey’s point of view, at least, there’s a logic and consistency to Erdogan’s policy on Ukraine, according to Soner Cagaptay, an expert on Turkey at the Washington Institute for Near East Policy.

Turkey, with its unique geopolitical power as gatekeeper to the Black Sea, wants to keep the region from falling completely under Russia’s control. At the same time, cozying up to Russia economically has offered Turkey a unique financial lifeline at a time when it’s battling ballooning inflation and a massive current account deficit, all ahead of elections next year.

“It’s in Turkey’s interest both in blocking Russian expansion and not burning its bridges with Washington and with Europe,” said James Jeffrey, a former U.S. ambassador to Turkey and the chair of the Middle East Program at the Wilson Center. “Russia is critical for Turkey’s current financial survival at a very weak time in Turkey’s financial history.”

“In the end, [Erdogan] is with the West to stop Russia from winning. But beyond that, he’s going to try to maximize Turkey’s position with Russia, with Ukraine, with the West, and with the Middle East,” Jeffrey added.

The Turkish Embassy in Washington did not respond to a request for comment.

Even as Erdogan boosts economic ties with Russia, leaders across NATO appear careful to avoid criticizing the Turkish president and paper over their internal differences, showcasing the unique power he has in this crisis as the conflict in Ukraine drags into its 10th month.

During a visit to Turkey this month, NATO Secretary-General Jens Stoltenberg commended Turkey for mediating the prisoner of war exchange and the grain deal between Russia and Ukraine and for “its strong support for Ukraine’s right of self-defense.”

The U.S. ambassador to NATO, Julianne Smith, also heaped praise onto Turkey when asked by Foreign Policy about its role in NATO and ties with Russia. “The role that Turkey has played in relation to the grain deal really has been indispensable and one that we are all tremendously grateful for,” she said. “Turkey is an important member of the NATO alliance, and we do appreciate what they’re doing for Ukraine across multiple sectors.”

But all the twists and turns in Turkey’s policies have frustrated key allies of U.S. President Joe Biden on Capitol Hill, who oversee funding for U.S. aid to Ukraine and arms sales to allies including Turkey.

“We’ve got to recognize that [Turkey] can make important contributions, and it’s better to have them in NATO than out of NATO,” said Sen. Jeanne Shaheen, a Democrat who sits on the powerful Senate Armed Services Committee and Senate Foreign Relations Committee. “But they also have been a bad actor in some ways. And we need to look at how we can … encourage them and hold them accountable when President Erdogan is a bad actor.”

When asked if he viewed Turkey as a “reliable NATO ally,” Democratic Sen. Chris Coons responded: “They’re a NATO ally.”