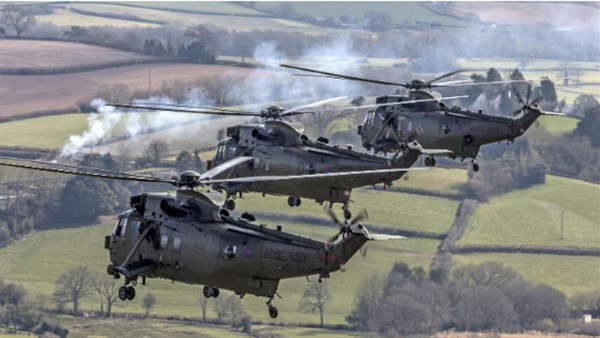 Britain is sending helicopters to Ukraine, in a step-up of its lethal aid to Kyiv.

Sea King helicopters will form part of a new package of military support that also includes 10,000 rounds of artillery shells.

The Times understands that three helicopters will eventually be delivered — with the first already in Ukraine. It is the first time a piloted aircraft has been donated by the UK to Ukraine.

Ben Wallace, the defence secretary, announced the new package of lethal aid ahead of a meeting of European defence ministers in Norway.

The UK is hosting ministers from 12 Northern European countries including Germany and Poland aboard HMS Queen Elizabeth for talks aimed at furthering support for Ukraine and countering the threat from Russia.

HMS Queen Elizabeth is one of Britain’s two aircraft carriers and the largest warship in the Royal Navy. It is currently anchored in Oslo, from where it is expected to sail to the Arctic to take part in Operation Achillean, a series of military drills with Nato allies, following talks on Wednesday.

Wallace said the 10,000 additional shells together with recent commitments to supply 1,000 surface-to-air missiles and 125 anti-aircraft guns would help Ukraine to defend the territory taken round Kherson.

“Our support for Ukraine is unwavering,” he said. “These additional artillery rounds will help Ukraine to secure the land it has reclaimed from Russia in recent weeks.”

The US has previously sent 20 Mi-17 helicopters to Ukraine, but Western countries have rejected requests for fighter jets, fearing that they could be used by Kyiv to attack targets in Russia and trigger an escalation.

The UK has already donated air defence missiles and Black Hornet micro-drones — but it had not previously supplied manned aircraft.

Although the helicopters are no longer manufactured, a refurbished Sea King costs around £5 million at current market prices.

Powered by two Rolls-Royce Gnome H1400 turboshaft engines, the Westland WS-61 Sea King can be used for search-and-rescue missions as well as reconnaissance. Prince Andrew flew one during the Falklands War and the helicopters also saw action in the Gulf War, the Balkans conflict and the Iraq War.

Ukrainian pilots have received six weeks of training on the submarine-hunting helicopters, which were retired by the Royal Navy in 2018. In total, the Royal Navy has trained 10 Ukrainian crews to use them along with associated engineers.

F-35B lightning jets will also take part in the exercises after practising take-offs and landings on HMS Queen Elizabeth in the North Sea. The flagship of the Royal Navy is the head of a carrier strike group that currently includes HMS Kent, a Type 23 frigate, and RFA Tidespring, a refuelling ship.