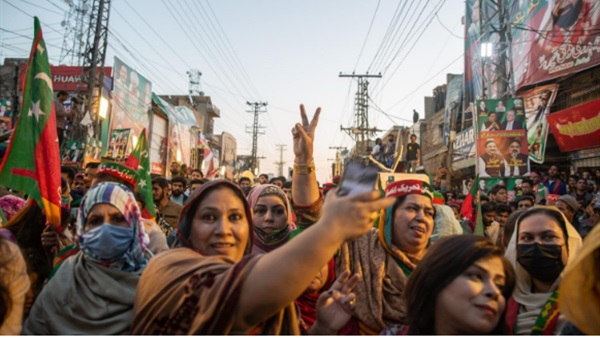 A large crowd is bearing down on Islamabad and it will take more than the threat of violence to deter them from demanding fresh elections on behalf of their wounded hero, Imran Khan.

After the cricket captain turned politician was ousted as prime minister in April he took his populist message to the country, mobilising supporters with a protest march in May and now the Long March: a 240-mile procession from Lahore to the capital to dramatise his claims to national leadership.

While leading the march two weeks ago he was shot three times in the leg in what he has said was an assassination attempt organised by the government. He is recuperating at home in Lahore while his devoted followers remain on the road, joined along the way by new converts to his message.

“I have never been involved in politics or a supporter of a particular political party but when I see Imran Khan giving his life for us, it inspires me to take a stand,” said Ahmed Rashid, a labourer who brought his family to a rally in the Jhelum district of Punjab province on Thursday.

The father of four, 40, was standing with his three young sons amid a sea of green, white and red flags, the colours of the Tehreek-e-Insaf (PTI) party, which Khan founded in 1996. His wife and daughter were among the women at the front. “Imran Khan has come out for us, for the people of Pakistan,” he said. “He has been injured by bullets because of us so that’s why we’re supporting him.”

Khan, 70, was giving a speech from a lorry at a rally in Wazirabad when a man opened fire on the convoy. One of Khan’s supporters was killed. The gunman was arrested and later said that he was motivated by Khan hurting his religious sentiments. To fend off accusations that the attack was staged Khan last week released a video with chunks of the plaster cast on his leg removed to reveal the bullet wounds.

For many Pakistanis he represents change from a political system entrenched in corruption and nepotism. Yet, Khan was pushed aside earlier this year after nearly four years as prime minister, following a vote of confidence amid public frustrations over soaring inflation, rising deficits and a failure to fulfil his promise to crush endemic corruption.

Since then he has been hit with terrorism charges (now dropped) and disqualified from holding office for allegedly mishandling gifts from world leaders (he denies the claim and says that the ban is unconstitutional).

Khan has also become a fierce critic of the military, which plays a pivotal but ambiguous role in Pakistan’s politics. Having previously enjoyed the army’s support, he has attacked the institution in regular live streamed appearances that command huge audiences around the country.

The march, which began last month, is rooted in a long tradition of protest processions in Pakistan politics.

About 3,000 people joined the rally in Jhelum. Some 50 were female despite Khan provoking uproar a year ago with misogynistic remarks apparently blaming women who wear “very few clothes” for a rise in sexual violence because “men are not robots”.

Sherbano, a 36-year-old housewife, said that Khan being shot had solidified her support for him. She joined the march at the end of last month and intends to stay with it until it finishes in Islamabad.

“The reason we support him is because he’s out for the country not for himself, and he took bullets for us. His struggle is for the people of Pakistan and he’s an honest leader,” said the mother of four.

“Normally when a political leader is ousted, people are happy and we distribute sweets in celebration but [Imran Khan] is the only leader where people were not happy he was removed.”

Khan told his supporters yesterday that he would rejoin them in Rawalpindi, adjacent to the capital, on Saturday. Since being shot he has made public appearances only via live video link.

Faizabad is the main entry point into Islamabad from Lahore and the most likely flashpoint. Hundreds of officers clad in safety gear, armed with batons and bamboo sticks practised crowd control exercises. Hanging on a motorway bridge behind them was a bright red banner stating that the business community does not support Khan.

“Our primary aim is that there is not a single casualty to the mob,” said Sohail Zafar Chatta, deputy inspector general of the capital’s police, referring to the march’s participants. However, security forces are being equipped with tear gas, rubber bullets and water cannons to ensure the rally does not enter the city and cause disruption.

“We have to consider the worst-case scenario. Terrorists could target the mob or the police. We are trying to protect the mob as well as ourselves. [Participants on the march] should have a designated [assembly] place, they should not damage property, nor hinder movement of the public. We will not allow them to occupy the streets.”

Chatta said 24 security force members had been injured during the march over the past three weeks and around 20 officers were injured during the May march initiated by Khan. He also highlighted the killing of a police officer during last year’s violent Tehreek-i-Labbaik Pakistan protests in Lahore.

The motorway junction at which security forces are bracing themselves for impact is also important because two jurisdictions meet there; the Punjab and Islamabad’s federal authorities, marked out simply by a bridge.

Punjab is under the control of Khan’s PTI party, so the authorities are sympathetic to the march, said Chatta. He said that there were concerns that if the situation became violent and security forces were targeted, Islamabad’s police might be more vulnerable if dragged over the provincial boundary line.

“We are used to dealing with demonstrators but we routinely deal with between 200 to 1,000. This time we’re expecting up to 10,000 people,” Chatta said.

“Islamabad’s red zone has the Parliament House, the president’s home, the Supreme Court and the diplomatic enclave, so we have to ensure it is protected because paralysing the red zone means paralysing the state. We will not allow the mob to paralyse the state.”