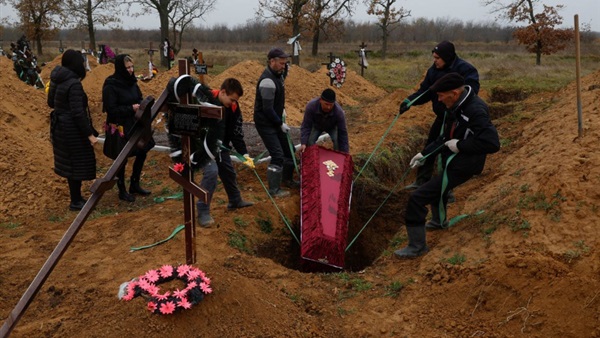 Russian forces launched another barrage of missiles across Ukraine targeting the capital Kyiv and other cities on Thursday, killing at least 15 people days after the Kremlin’s military carried out some of the heaviest bombing of the entire war, officials said.

Separately, President Biden early on Thursday disputed Ukrainian President Volodymyr Zelensky’s account of an incident in which a stray missile killed two people when it exploded in Poland earlier this week.

Kyiv regional Gov. Oleksiy Kuleba told residents to go to air-raid shelters while the region’s air defenses were firing. A missile also struck an infrastructure facility in Odessa, the first time the region has been hit in weeks, according to the head of the area’s military administration. In southeastern Ukraine, assaults damaged two infrastructure facilities, killed 15 people and wounded at least 14 others, Ukrainian officials said. Russia unleashed one of its most severe bombings of the entire war on Tuesday, launching 96 missiles by air, land and sea, according to the Ukrainian government.

Thursday’s attacks came the same day that United Nations and Ukrainian officials said they had agreed with Russia and Turkey on an extension of an international agreement that allowed Ukraine to resume its Black Sea grain exports earlier this year. The Kremlin had threatened to abandon the deal seeking facilitation of its own agricultural exports. Mr. Zelensky, Russian officials and U.N. Secretary-General António Guterres confirmed the extension on Thursday before a Nov. 19 deadline.

Moscow has escalated attacks on Ukraine’s energy infrastructure in recent weeks to put pressure on Ukraine’s broader population at a moment when Russia’s forces are losing ground in the war, Ukrainian and Western officials say.

“This is a deliberate tactic by [Russian President Vladimir] Putin. He seems to have decided that if he can’t seize Ukraine by force, he will try to freeze the country into submission. It is hard to overstate how horrific these attacks are,” said Linda Thomas-Greenfield, the U.S. ambassador to the U.N., in comments to the U.N. Security Council released early Thursday.

A video shared by Mr. Zelensky on social media showed a missile hitting a busy roadway in the southeastern city of Dnipro during Thursday’s morning commute, causing a large explosion.

“The terrorist state wants to bring Ukrainians only as much pain and suffering as possible,” he said.

Russian forces fired 18 cruise missiles along with drones during Thursday’s attacks, Ukraine’s air force spokesman said. Eight people were killed in the attack on Dnipro while at least seven people were killed in a strike that hit a residential building in the Zaporizhzhia region, Ukrainian officials said.

Also among the targets was a gas-production facility in eastern Ukraine operated by the state oil-and-gas company, the firm’s director said in a Facebook post.

Late Wednesday, Mr. Zelensky said his military had informed him that the missile that landed in Poland on Tuesday was Russian.

Mr. Biden Thursday disputed Mr. Zelensky’s remarks about the missile. Upon arriving in Washington, D.C., on return from the Group of 20 summit in Bali, Indonesia, Mr. Biden was asked about Mr. Zelensky’s comments.

NATO, U.S. and Polish officials said Wednesday that the missile was likely a Russian-made weapon fired by a Ukrainian air-defense system. They said they found no evidence that it was directed there intentionally. The missile briefly raised the risk of a direct confrontation between Russia and the North Atlantic Treaty Organization. The crisis de-escalated within hours after senior Western officials said the missile was unlikely to have been launched by Russia.

In his nightly address to the nation on Wednesday, Mr. Zelensky called for a full investigation and said Ukraine should be involved in any international probe.

Speaking via videolink to an economic forum hosted by Bloomberg on Thursday, Mr. Zelensky said, “I think the world also doesn’t 100% know what happened.”

Russia denied any responsibility for the strikes.

“I am also convinced that the time for ‘Patriots’ has come,” he said in a tweet about the call with his U.S. counterpart.

Ukraine has repeatedly pressed the U.S. to provide more and better air-defense systems to supplement its previous generation of Soviet-era equipment. The U.S. has supplied Ukraine with National Advanced Surface-to-Air Missile Systems, known as Nasams, along with missiles for Hawk antiaircraft systems.

Kremlin spokesman Dmitry Peskov told reporters Thursday that Russia’s military operation would continue and that it “doesn’t depend on weather conditions,” when questioned about the fact that winter was approaching and many Ukrainians would be left without heating because electrical grids and other infrastructure had been destroyed.

He blamed the absence of power and heating in parts of Ukraine on Kyiv, and, in particular, on what he said was Ukraine’s refusal to negotiate.

“The reluctance of the Ukrainian side to solve the problem and sit down for talks…are what lead to these consequences,” he said.

The Nov. 15 barrage came after Russia withdrew its forces from the southern city of Kherson days earlier in a major setback for the Kremlin. Kherson was the only regional capital captured by Russian forces since they invaded in February.

The U.K. Ministry of Defense said on Thursday that the Nov. 15 attack was “likely the largest number of strikes that Russia has conducted in a single day since the first week of the invasion.” Recent assaults are drawing deeply on Russia’s reserves of cruise missiles, the ministry said.