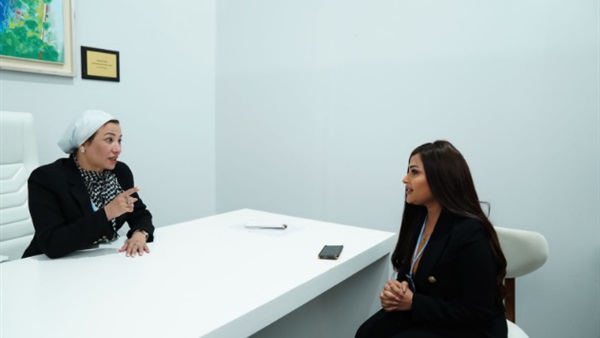 The world's eyes have turned to Sharm el-Sheikh, where COP27 is held.

The world is coming here to save the planet from destruction and the natural disasters induced by climate change and weather fluctuations.

Al-Bawaba News had its actual participation in the event to find out about this event, monitor it and send a clear picture about it to the world.

In this part, al-Bawaba interviews Egyptian Minister of Environment, Yasmeen Fouad, whose ministry has been behind organizing every day of the conference.

Let me congratulate you on our country's hosting of this great event. How were preparations for this world summit? What is your vision for means of inviting the world's attention to Egypt and Africa?

The whole thing was managed by a high committee that was headed by Prime Minister, Mustafa Madbouli. The committee formulated a plan for the organization of the conference. This plan came in line with the United Nations' Host Country Agreement. The United Nations also worked together with the Egyptian government to prepare an action plan at an early stage last February by developing a path, forming 15 working groups from different ministries.  The Ministry of Environment has submitted a weekly report to the prime minister on the latest developments to prepare for the events of hosting the summit, in co-operation with the governor of South Sinai and with all the provincial authorities.

What were the most important challenges facing Egypt during the United Nations' selection of the country that would host COP27?

The UK had two years to prepare for COP26. The United Arab Emirates will organize COP28 knew that it would be the host country of that edition of the conference last year. This means that it too has two years to prepare for the conference. However, Egypt had only 11 months only to prepare for this conference. It had 11 months to turn the entire city of Sharm el-Sheikh into a green city. We also faced a problem of supply chains, as the Russian-Ukrainian war kept dragging on. We were trying to compensate for the shortage, whether using Egyptian alternatives or changing the plan for that.

Can you give us some information about the COP27 investment platform?

For any country to be able to obtain investments, this country has to have a strategy, clear goals and legislation that make the world recognize that its submitted plan is one that can be implemented on the ground. This country has to commit to the Paris Climate Agreement. This same country has to harmonize the private sector with international bodies. The Egyptian government has taken on a very big responsibility, because the countries that carry out the regulation process depend on logistical, technical and political preparation. Nevertheless, Egypt had only 11 month to issue a national climate change strategy and issue carbon reduction scenarios. It also worked for the first time on a package of projects in the fields of energy and water. This is in addition to the plan of contributions made by the Environment Ministry with the concerned ministries. If the foundation is not strong, you cannot get funding, because the projects are not serious or because they are not feasible.

Is seriousness a prerequisite for winning funding for the projects submitted to the Climate Fund?

The seriousness of the projects submitted is what facilitates the financing. Some countries were given financing promises. However, they were not given this financing, because the projects they submitted were not serious. We have also worked on developing an investment plan for projects facing climate change. This was launched by the prime minister yesterday at the Egyptian pavilion. The plan has been submitted, and this is part of the world's needs, which exceed $200 billion. The first package is for urgent priorities, but the rest is done by identifying investments and the gaps in legislation and policies.

At climate conferences, the host country always seeks to announce a set of presidential initiatives at the state level. All initiatives focus on Africa and developing countries. The days of the conference were divided into one day for mitigation, and the rest of the days come for adaptation. This is the greatest interest of the African continent and developing countries. We presented an initiative for agriculture and food security, an initiative for water security and reducing the effects of climate change on water resources, an initiative for nutrition and health preservation, and an initiative to support the capabilities of African women to be more resilient to the effects of climate change on water resources.

What are the negative impacts of climate change on Egypt, which were presented at the conference?

Like in the case of all African countries, climate change leads to a very high temperature or a very low temperature, which leads to the scarcity of food because it affects crop productivity. The first package Egypt made as a result of climate change is to start producing genetically engineered crops to ensure the continuation of their production to protect food security. In the event of climate change-induced problems, such as flood, including the Aswan floods that happened last year and the Ras Gharib floods that happened the year before, they resulted in the demolition of houses. The temperature change must be combated, because the population could not and does not have the ability to cope with it. Therefore, the current session of the conference should have represented Africa and developing countries, such as the Maldives, which is one of the countries most affected by climate change because it is a radical country and hosted the first adaptation workshops and attended by myself. I supported the Maldivian minister, although the meeting could not have been at the ministerial level. I went there to send a clear message from Egypt in this regard.

What are the most important gains that Egypt will reap from hosting COP27, especially at the economic level and tourism?

Promoting the city of Sharm el-Sheikh is one of these gains. Promoting the Egyptian state as a state capable of organizing such international conferences and present all its projects in the green zone is another important gain. Tourism is a great beneficiary of organizing the conference here. We have 38,000 participants from all over the world. Egypt signed pledges and projects worth $15 billion, thanks to the uniquely prepared project and strategic plan and its organization of the climate conference.

What about the gains of Sharm el-Sheikh in South Sinai specifically towards hosting COP27?

The climate summit was able to provide job opportunities for a large number of workers in Sharm el-Sheikh, where tourism thrived in an unprecedented way. Some shops had previously been shut down. These shops have already reopened after Egypt announced that it would host the summit. There is employment based on the expansion of roads, projects, conferences and in means of transport.

What are Egypt's gains from COP27, especially in the Day Financing?

About $600 million has been provided to the African continent to adapt to the negative effects of climate change, and activate the African Adaptation Initiative again, which was noted by President Abdel Fattah al-Sisi. We are reviving this initiative in light of the country's hosting of heads and leaders of other countries, including US President Joe Biden.  We are also striving to ensure that countries fulfil their commitments to the climate summit, through the Green Climate Fund and the Adaptation Fund for these contracts.

In a previous interview with Minister of Transport, Kamel al-Wazeer, he praised great co-operation with the Ministry of Environment in making transport a sustainable one powered by renewable energy. Tell us about this co-operation and what other ministries do you co-operate with in this field?

We co-operate with various ministries to integrate the environmental dimension into the plans of the development sectors. I think the presence of the ministers in Sharm el-Sheikh is the biggest proof that the Ministry of Environment is integrating the environmental dimension into all plans and sectors, where co-operation has been established with the ministries of irrigation, agriculture, industry, petroleum and transport.

What about Nouwfi projects to help Africa tackle climate change?

The Nouwfi projects received support from the German and American sides, especially to energy projects in Africa. They seek to increase new and renewable energies in African countries by making means of transport run on electricity and natural gas.

What is the role of the civil society in implementing the National Climate Change Strategy 2050 COP27?

The role of civil society is very large in the implementation of the country's renewable energy strategy. About 38 civil society organizations are attending COP27, where major events were held in the Green and Blue zones. When the exchange rate of the US dollar increased, non-governmental organizations could not pay the fees for the events and rent pavilions. The ministries of environment and social solidarity stepped in to pay these costs.

Do you think that voluntary, not forced, commitment, can make developed countries like America and China meet their climate commitments?

What is happening in the world is forcing all countries to fulfil their obligations. There are no chances of non-fulfilment, especially since the effects of climate change have become bloody for everyone, whether for rich or poor countries, or the countries that emit the most or the least.

How did you find the negative impact of climate change on children in Africa, the most vulnerable breed of humanity?

The changes have affected the sponsorship significantly and pregnant women. Egypt began three years ago to work on integrating climate programmes into education. We also worked on a special day for this at COP27. There is a special initiative on nutrition between the ministries of environment and education.

What are your aspirations for the climate summit? Will it be a fleeting summit like previous ones? will it be decisive in the climate change file?

I hope that during the first week of the COP27, we will reach the climax of negotiation and co-operation in the field of adaptation, losses and damage in addition to financing, and progress from what we were in Glasgow. The Sharm el-Sheikh conference will be an actual conference for transformation, so that developed countries can put on the table the actual measures of this agreement.

What are the signs of success of COP27 climate summit in Egypt?

The presence of the largest number of presidents is proof that the issue is important. The presence of 38,000 participants also demonstrates this. This is a very large number compared to previous climate conferences, in addition to the number of pavilions at the climate summit in Sharm el-Sheikh. This number is more than what was in Glasgow.