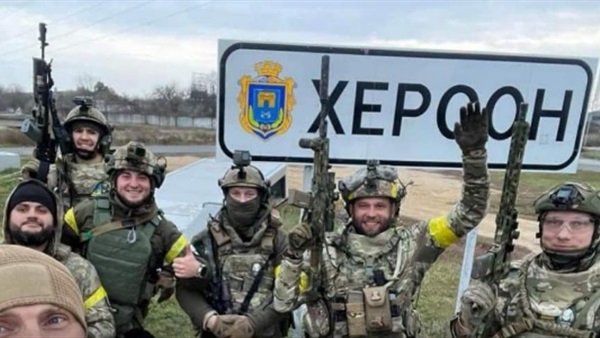 Ukrainians were celebrating victory against the odds yesterday after their troops entered Kherson, having forced President Putin’s war machine into a chaotic exit from the city.

President Zelensky hailed it as a “historic day”, adding: “The people of Kherson were waiting, they never gave up on Ukraine. Our people. Our Kherson.”

From families who fled the Russian onslaught in the dark, early days of the invasion to relatives who had stayed behind, many without power and heating, the nation rejoiced over their army’s most decisive strategic victory to date — in a war they were repeatedly told they could not win.

Troops were greeted as heroes by cheering civilians as they entered the city centre. People waving Ukrainian flags and singing the national anthem welcomed the liberating soldiers after eight months of a brutal occupation.

Kherson, a strategically important city in southern Ukraine, with a pre-war population of 280,000 was the only provincial capital the Russian army was able to capture. Its surrender is seen as a personal humiliation for Putin.

“Ukraine is gaining another important victory right now,” Dmytro Kuleba, the Ukrainian foreign minister, wrote on Twitter. “Whatever Russia says or does, Ukraine will win.”

Moscow said yesterday that it had withdrawn all its soldiers and military hardware from Kherson, pulling back to heavily fortified positions on the east side of the Dnipro river which divides Ukraine. It had admitted two days earlier that Ukrainian missile strikes had destroyed its army’s supply lines to the city and left its soldiers isolated.

The retreat signals the end of Russia’s hopes of controlling the southern coastline of the Black Sea and seizing the cities of Odesa and Mykolaiv.

In Kherson, locals pulled down a propaganda billboard emblazoned with the words: “Russia is here for ever.” It was erected less than six weeks ago, after Putin signed a decree annexing the wider Kherson region, along with three others, in the east and south of Ukraine.

Russian soldiers could be seen running across a pontoon next to the Antonivskyi bridge, which the Kremlin said had been partially destroyed to avoid a Ukrainian pursuit. Russian state media later published a video that showed a huge explosion on the bridge.

Sporadic Russian artillery fire continued throughout the withdrawal. In Lymany, a village 25 miles from Kherson, Ukrainian soldiers hurried to take cover in a bunker as a rocket whizzed over their headquarters. “Their infantry is retreating and they are trying to provide cover for them,” said a commander who goes by the call sign Vesily (Jolly). “But there have been fewer rocket attacks recently. That’s a good sign.” His troops were weary but exuberant, Vesily said, after liberating a number of villages near Kherson over the past few days. “There’s not much left of the settlements. One is nothing but ruins. That’s what Russia leaves behind: ruins, death and rubbish.”

Some Russian soldiers were said to have been left stranded in the scramble to escape. “The last order in one unit was ‘change into civilian clothes and get the f*** out of here however you want’,” a Russian solider said on Telegram.

The Ukrainian army warned Russian soldiers who had been left in Kherson to lay down their arms or be killed. “Any Russian servicemen who offers resistance will be destroyed. Your only chance to avoid death is to immediately surrender,” it said in a Russian-language message.

A source in the Ukrainian military told The Times that 24,000 Russian soldiers out of an occupying force of 63,000 had been killed, captured or deserted in the weeks leading up to Moscow’s decision to abandon the city. He said some of them had attacked their commanding officers when they tried to prevent them driving towards Ukrainian lines bearing a white flag. The claim could not be verified. Officials in Kyiv had urged caution, amid fears that the Kremlin could be setting a trap by faking a withdrawal. Mykhailo Podolyak, an adviser to President Zelensky, had said earlier that Russia was seeking to turn Kherson into a booby-trapped “city of death” for Ukrainian forces.

Yesterday that caution appeared to have been replaced with exuberance: soldiers near the front hugged each other and laughed as they prepared to enter the city.

The collapse of Russia’s army in Kherson follows similar setbacks in the northern Kharkiv region and in Donbas — but the Kremlin insisted that the withdrawals were not a blow to Putin’s prestige. Dmitry Peskov, his spokesman, claimed that Kherson remained a part of Russia and that the Kremlin’s “special military operation” in Ukraine would continue. “This is a Russian region,” he said.

In a clear attempt to distance Putin from the army’s failures, Peskov said that the decision to withdraw from Kherson had been taken by Sergei Shoigu, the defence minister, and General Sergei Surovikin, the supreme commander in Ukraine. Yet hardliners in Moscow have already criticised Putin for his handling of the war, and the surrender of Kherson will further enflame passions.

“Autocracy also has a downside. Absolute power in the event of success, but also absolute responsibility for failure,” wrote Alexander Dugin, the nationalist philosopher whose daughter was killed in a car bomb near Moscow in August.

Even as Putin’s forces flee, his army continues to cause misery in Ukraine with missile strikes on civilian targets that appear to be acts of sheer vengeance. A Russian missile destroyed a five-storey block of flats in Mykolaiv, killing six people as they slept yesterday morning.

As Putin’s forces flee, his army continues to cause misery in Ukraine with missile strikes on civilian targets that appear to be acts of sheer vengeance. Early this morning a Russian missile slammed into a five-floor block of flats in Mykolaiv, a Russian-speaking city that is 60 miles from Kherson, killing six people as they slept.

Rescue workers scrambled to dig the living and the dead from the rubble. A woman’s blond ponytail and bloodied face could be seen poking out of a blanket before she was placed in a black body bag. A local woman said that her friend, Natasha, had been due to celebrate her 34th birthday. “We can only pray that she somehow lived,” she said, her face streaked with tears.

Back in Lymany, Vesily said he and his men were looking forward to the end of the war. “Everyone wants to go home and see their families and to live normal lives again,” he said from a bunker decorated with a Dynamo Kyiv football scarf and religious icons.

“The Russians will leave Kherson and then we’ll push them out of Crimea, Donbas, Luhansk. This is all coming soon.