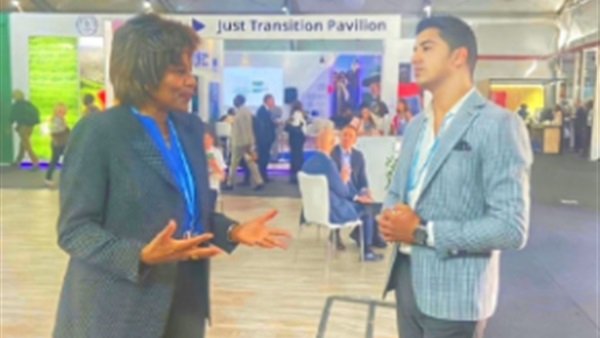 Africa produces only 6% of global emissions, but it is bearing the brunt of the suffering caused by climate change.

COP27 is held in Sharm el-Sheikh, known as the city of peace, at a time when the world faces many challenges induced by climate change.

This change threatens the entire global community. The climate summit in Sharm brings together guests from several countries and representatives of many climate-related institutions.

The past eight years witnessed climate disruption, leading to a significant increase in the scale of natural disasters. Current climate policies will condemn the world to a catastrophic rise in temperatures by 2.8 degrees by the end of the century. Collective action must be taken to reduce this rise to 1.5 degrees. However, greenhouse gas emissions are still rising.

Among those attending the summit is Marie Francoise, the World Bank (WB) country director for South Africa, Botswana, Namibia, Lesotho and Eswatini.

Al-Bawaba News interviewed both guests on the margins of the summit.

"I was surprised by the great awareness that I see across the continent," she said.

Duursen called for global solidarity so that developing countries can make the transition to the green economy.

There must be, he said, climate finance to help them do so.

Here is the interview al-Bawaba News conducted with both summit guests:

How important is the climate change summit this year?

The climate agenda this year is very important, in fact. Organizing COP27 in Egypt and Africa makes it an African conference par excellence. What really surprised me is the great awareness that I see across the continent. I also saw a number of African pavilions pushing for the issue of adaptation on the continent. As you know, Africa has produced only 6% of global emissions. Nevertheless, it takes on the greatest burden of suffering caused by climate change; from floods, hurricanes and droughts. We really need to engage in the discussion of the issue of adaptation. We also need to discuss the reduction of carbon emissions.

What are the proposed solutions to solve the problem of climate change?

I believe the solution lies in the climate agenda, the adoption of which has become universal. The solution, as we also see, lies in the further involvement of developed and developing countries in using diverse sources and adopting different ways to support this agenda. At the same time, developing countries on the African continent should prepare a plan to identify the investments they need to adopt sources and methods to support the global climate agenda.

What is the importance of this and the role that ordinary people can play?

This is a good question. As I mentioned earlier, those who will be most affected by the problem should be part of its solution. These citizens are the most affected and they are the ones who should put pressure on governments to accelerate action to confront climate change. Simply everything that can be done to grow and prosper is hampered by the gravity of climate change.