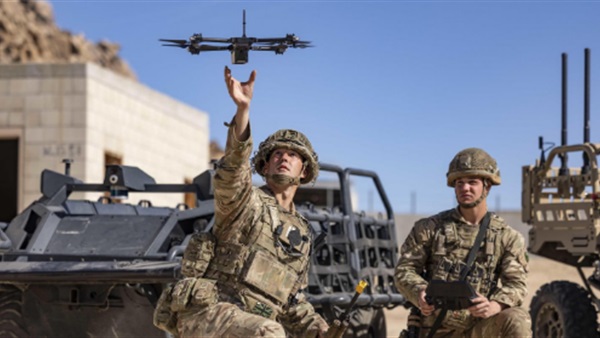 The British Army has sent a new elite infantry regiment and a platoon of drone operators to the Mojave desert to take part in an American war-gaming exercise that simulates a Russian invasion of Europe.

About 450 British soldiers were flown to California for a fortnight of drills at Fort Irwin, a US military base that is almost 1,000 square miles. Among those joining in the exercises, called Project Convergence, were the Rangers, an elite British Army regiment formed last year.

British, American and Australian troops tested new combat techniques as they learnt lessons from the war in Ukraine, training in the open landscapes of the desert that are similar to the flat terrain of the Ukrainian steppe.

As part of the exercises, swarms of drones identified targets while dune buggies sped across the windswept dirt and British GMLRS rocket launchers fired at enemy positions spotted by American F-35 fighter jets.

The first half of Project Convergence, which had limited British involvement, imagined a conflict breaking out on a Pacific island. The second phase, which ended this week and had a bigger British contingent, simulated a land war in Europe. Both take place against a backdrop of rising tensions with China and Russia.

In total, about 4,500 soldiers took part in the exercises at Fort Irwin, an arid expanse of mountains, plateaux and shrubland. The base includes mock villages, complete with minarets and domed mosques, which prepared American soldiers for the war in Afghanistan.

The plywood settlements were made realistic by Hollywood set designers, who were hired by the US army. During the wars in the Middle East, Afghan and Arabic speakers from Los Angeles were driven up to the Mojave desert to play civilians in the drills.

But in a sign of new priorities, the roles are now given primarily to Russian speakers. The fake civilians even have their own social media networks — “Fakebook” and “Twatter” — on which they whip up an unruly mob by reporting any examples of US troops behaving poorly. The soldiers must then pacify the crowds.

Project Convergence centred around the village of Ujen, one of the smaller mock settlements on the base. The British troops involved were drawn from the 20th Armoured Infantry Brigade, the 2nd Battalion Yorks and the Rangers.

Wearing their grey berets, the Rangers tested themselves alongside their US counterparts in extreme weather ranging from snow to dust storms with temperatures higher than 40C.

“This has proven we can work alongside US special forces,” said Captain Ollie Dean, who led the eight-strong detachment working with the US 7th Special Forces Group. “We’ve got the thumbs up that we’re up to standard.”

The Rangers, whose emblem is a peregrine falcon, can serve to identify targets in advance of main fighting units. The regiment has 800 soldiers but will eventually have 1,000. They are part of the Army Special Operations Brigade and soldiers hoping to join will have to undergo ten weeks of additional training. “We have to be able to be comfortable in austere environments, working in small teams and even by yourself potentially,” Dean said.

The Rangers were testing new technologies with the 2 Yorks, also known as “RAS Platoon” because its troops specialise in drone warfare. RAS is an acronym for Robotic and Autonomous Systems. The drone specialists used Watchkeeper long-range reconnaissance unmanned aerial vehicles (UAVs) to gather intelligence on enemy positions before Zodiac, an artificial intelligence system, gave commanders a “menu” of options suggesting the best way to destroy a target. The British soldiers also flew Pumas, handheld drones with a 2.8m wingspan that are thrown into the air like a javelin.

Major Andy Sawyer, serving in York 2s, said the army was playing “catch-up” with its drone warfare after watching the deadly impact of UAVs in Ukraine. The Ukrainians have used cheap drones to direct artillery fire while the Russians have attackedlarge cities with “kamikaze” drones to undermine civilian morale.

“We’ve seen some of the capabilities in the news in Ukraine,” Sawyer said. “Some things we need to bring in rapidly and other things we’re experimenting with.”

As part of the effort to improve British and US co-ordination in the battlefield, both countries used 3D printers to produce spare parts for the other country’s equipment. British soldiers also experimented with M-Raza, an autonomous dune buggy, and Mission Master, a German unmanned vehicle.

Alex Chalk, the defence procurement minister, said the desert exercises showed the need to invest in drone warfare. “The way you multiply force is by allying UAV technology with individuals in the field,” he said. “We saw one person here controlling over 30 drones. Those aren’t just UAVs for reconnaissance. They can also deliver that punch on the battlefield as well.”

With so much data collected by drones, he said part of the challenge lay in sifting through and interpreting the vast quantities of information.

“There isn’t an issue with having enough data,” he said. “There’s an issue with how you process that data. We’re looking at the potential for a fog of digital war.”

The 20th Brigade reported to the US 1st Cavalry division to test how British and American troops could work together in open warfare. The central corridor of Fort Irwin is renowned as the place “where cavalry squadrons go to die” and the exercises were meant to be challenging for the units. By using an increased number of drones, the US and British troops were able to minimise casualties.

Next year, the allies will meet again for more war-gaming as the US army brings a whole division to Europe for its vast Warfighter exercise. In a sign of the renewed focus on the European theatre, the exercises are likely to take place in Germany or Poland.

Modelled on the US Green Berets, the Rangers, tasked with special operations, function somewhere between the SAS and the ordinary infantry.

Light, agile and often armed with a GPS tracker not unlike a mobile phone, the Rangers are a key part of the army’s vision for future combat. Although less than a year old, the regiment can trace its history back to Rogers’ Rangers, an elite British unit that fought in North America in the 18th century. It was founded by Robert Rogers, an Ulster-Scots frontiersman who wrote 28 “rules of ranging” by blending Native American fighting tactics with European military doctrine.

Deployed in small units ahead of the main battlegroup, the modern Rangers pinpoint targets and relay information to drones for further reconnaissance or for artillery to hit. The regiment’s insignia is the peregrine falcon, the fastest creature on the planet. A metal badge of the falcon adorns the grey beret worn by every Ranger.

Specialising in counterterror operations, the Rangers aim to be highly adaptable and can quickly embed themselves in foreign armies using any kit to hand. Working for the first time with their US counterparts over the past month in the Californian desert, the Rangers tested the use of dune buggies deployed from the back of American helicopters.

The regiment was created last year through a Ministry of Defence command paper titled Defence in a Competitive Age. “They will be able to operate in complex, high-threat environments, taking on some tasks traditionally done by Special Forces,” the paper said.

Comprising four battalions, the regiment will ultimately total 1,000 troops and is part of the army’s Special Operations Brigade. Soldiers do a six-week training course to prepare for life as a Ranger, although that period will soon rise to ten weeks.