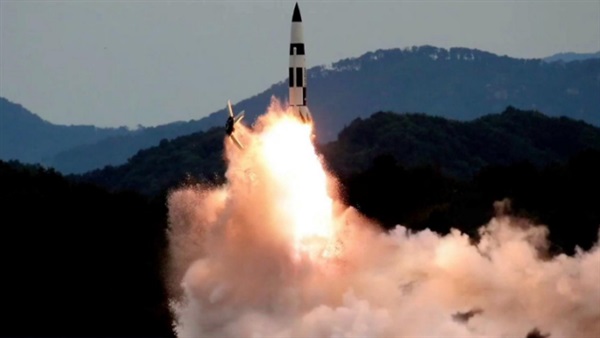 The United States called for a meeting of the United Nations security council tonight as Kim Jong-un’s unprecedented missile barrage prompted fears of a nuclear “haystack” attack on the Korean peninsular.

For the first time in five years Washington was set to demand that Moscow and Beijing exert pressure on Kim not to resume nuclear testing, even as officials in the United States concede that Pyongyang is making “preparations” for such a test.

However, with Beijing and the Kremlin at loggerheads with the other permanent members on the council — France, Britain and the US — there was little chance of agreement over North Korea, which has been covertly supplying Russia with a “significant” number of artillery shells for its war in Ukraine, a conflict that China has failed to condemn.

The launches were a stark illustration of how Kim has modernised much of the North Korean military, progressing from having a few old Soviet Scud missiles bought from Egypt in the 1970s to becoming a fully fledged member of the exclusive nuclear club.

“The greatest dangers we face from North Korea fall into two areas: one is its artillery, which is embedded in many of the mountains on their side of the demilitarised zone, and, more formidable, is its nuclear-armed missiles,” said Andrew Krepinevich, a US defence analyst and former Pentagon official.

“Given open source information on the number of nuclear warheads in their possession — 20 or so — we could face the challenge of dealing with a haystack attack in which North Korea launches a salvo of, say, 40 missiles but only a small number of which are actually armed with nuclear weapons,” he said.

“Yet we would be compelled to intercept all 40, which would deplete our inventory of missile interceptors. Assuming they have 20 nuclear warheads and they can fit them on missiles, North Korea has enough missiles to fire several such salvoes until it finally overwhelms its adversaries’ defences,” he said.

Growing North Korea’s missile arsenal has been a dedicated pursuit by successive dynastic regimes in Pyongyang, accelerated by Kim, at the expense of the North Korean people. “From a humanitarian perspective, it’s heartbreaking to see that what wealth North Korea has it is literally dumping into the ocean,” said Ian Williams, deputy director of the missile defence project at the Washington-based Center for Strategic and International Studies.

There was nothing new in terms of technology from this week’s test launches, Williams added. “But what was new was the volume of launches — 23 short-range and one ICBM [intercontinental ballistic missile] which failed in its second stage,” he said. “It shows they have a manufacturing production line that’s humming along, so we have to assume they can amass them very quickly. This is by a country whose GDP is on a par with Uganda.”

North Korea has launched more than 60 missiles this year, a hypersonic missile in January and a claimed test of its largest-ever ICBM, the Hwasong-17, with a potential range of 9,300 miles. The size of the missile indicates that it could carry multiple, manoeuvrable warheads.

The US said it was actually an older Hwasong-15 but this missile still has an estimated range of more than 8,000 miles, capable of reaching anywhere in the US if fired on a flatter trajectory. Pyongyang has also developed submarine-launched ballistic missiles, the Pukkuksong-4 and Pukkuksong-5, with ranges of more than 1,800 miles.

“We have to assume they have miniaturised nuclear warheads to fit on the end of their missiles. The technology has been around since the 1950s and 1960s, so I wouldn’t be surprised if they mastered it themselves, although they may have had help; there are a lot of people around the world who know how to build nuclear weapons,” Williams said.