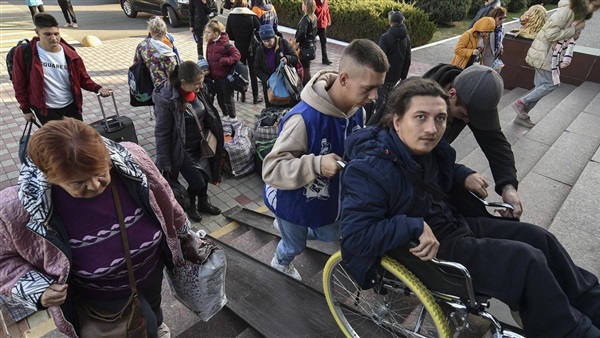 President Putin said today that civilians should flee the southern city of Kherson, conceding that Ukraine’s counter-offensive is putting those living under Russian occupation at risk.

Hours after western officials warned that Russia’s army is facing another humiliating defeat in Ukraine’s south where Russian forces have abandoned their positions, Putin said those living in Kherson should flee.

“Those who live in Kherson should be removed from zones of dangerous fighting,” Putin told young volunteers in Red Square as Moscow celebrated Unity Day. “The civilian population should not suffer from shelling, an offensive, a counter-offensive or other such things.”

Putin spoke to the group of volunteers from Kherson, who said they are helping people leave the looming battle. Russian commanders are said to have fled the frontline, leaving “demoralised and leaderless” conscripts to face a Ukrainian advance. Analysts predict a Ukrainian victory by the end of the year.

Kherson is the last Russian-occupied city on the west bank of the Dnipro, the river that bisects Ukraine. Officials said it would be “impossible” for Putin to maintain a military presence on the other side of the river if Kherson fell.

The capture of the city was the first big Russian victory after the invasion in February as troops stormed up from Crimea in a rapid advance.

With winter approaching, however, Russian generals appear to have decided to abandon their toehold on the west bank of the Dnipro and concentrate on fortifying their posts on the east bank.

A western official said: “They’ve decided that Kherson isn’t worth fighting for but that natural defensive barrier of the river is extremely valuable to them.”

Videos on social media show that checkpoints have been left unmanned and the Russian flag has been lowered from the main administrative building.

A clip on Telegram shows a Russian-installed official telling civilians “everything is fully under control” as he appears to be fleeing in a car.

Kirill Stremousov, deputy head of the Kherson military-civilian administration, insisted that life was “continuing as normal” despite filming the video from the front seat of a car with the back obscured by suitcases and bags.

Western officials are waiting to see if the setback prompts renewed criticism of the Kremlin; hardliners are aggrieved at what they see as the calamitous mishandling of the invasion.

The officials said Russian forces were running low on ammunition and the Kremlin was importing artillery shells from North Korea. After Putin ordered 300,000 men to be conscripted, freshly mobilised troops were turning up on the front line without weapons.

“In Kherson, most echelons of command have withdrawn across the river leaving demoralised and leaderless men,” an official said. “The retreat will be presented as an evacuation. We can expect another rise in pointed criticism of Russia’s national leadership.”

Russian troops have begun moving tens of thousands of people across the Dnipro, claiming that they are at risk from a Ukrainian plan to flood the city by destroying a hydroelectric dam and that they fear a Ukrainian “dirty bomb”.

Kyiv’s military intelligence accused Russia of looting solar power plants from Kherson and forcing people out of their homes so soldiers could move in.

Russian troops were reported to be dressing as civilians and stealing cars as well as taking children from boarding schools in Kherson to Crimea, where they were being housed in a “psychiatric hospital”.

Western officials believe there will be a “reduction” in fighting over the winter after Oleksiy Reznikov, the Ukrainian defence minister, acknowledged that heavy rains were “slowing us down”.

Kateryna Stepanenko, of the Institute for the Study of War in Washington, said Ukraine was likely to capture Kherson by the end of the year.

She also said the defeat in Kherson would be symbolic, given the region’s historic links. Grigory Potemkin, the Russian general and lover of Catherine the Great, is buried in the city, although there have been reports that Kremlin forces have removed his body.

“Kherson bears both a strategic and historical significance to Russia,” she said. “It is a city the Russians would want to hold for propaganda purposes.”