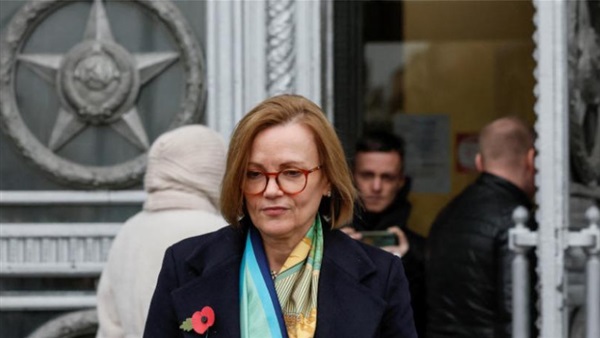 Russia has summoned the British ambassador to the foreign ministry in Moscow after accusing the UK of co-ordinating a Ukrainian drone attack on the Crimean port of Sevastopol.

Deborah Bronnert, the British ambassador, was forced to attend a meeting in the Russian foreign ministry this morning as a small group of pro-Kremlin protesters held up placards outside reading “Britain is a terrorist state”.

The Kremlin has accused the Royal Navy of overseeing a daring raid on the frigate Admiral Makarov on Saturday, without providing any evidence. The flagship of the Black Sea fleet appeared to be damaged after the assault, which involved a combination of amphibious and flying drones bombarding the 125m-long warship as it was moored in port.

Maria Zakharova, a Russian foreign ministry spokeswoman, said that “British specialists” had been involved in the attack and that she would provide her evidence for her claims — something that is yet to appear.

The accusations, dismissed by the UK as “false claims on an epic scale”, come days after Moscow also blamed the Royal Navy for an attack on the Nord Stream underwater gas pipelines and vowed to retaliate for what it called an act of terrorism.

The Admiral Makarov assumed the role of flagship of the Black Sea fleet following the sinking of the cruiser Moskva in April.

Ben Wallace, the defence secretary, said yesterday that the Russian navy was being forced to sit in harbour in the Black Sea because of “prickly” Ukrainian defence on the southern coastline.

Appearing before the defence select committee, Wallace said the Russian navy was “not going out to sea much these days” and he pointed to the drone attack on Sevastopol and the Ukrainians’ use of harpoon anti-ship missiles as reasons why Russian ships could no longer be confident of sailing without being attacked.

Six grain ships departed from Ukrainian ports in Odesa today after Russia recommitted to a deal that allowed vessels passage through the Black Sea.

“After the resumption of the grain initiative, six ships left Ukrainian ports,” Hulusi Akar, the Turkish defence minister, said. “Thus, the number of ships leaving the ports has exceeded 426, and the amount of grain transported has exceeded 9.7 million tons,” he said, according to Turkish media.

Turkey and Russia announced that Moscow would be rejoining the deal yesterday after negotiations brokered by Ankara and the United Nations. In the process, Russia noted that it had received sufficient assurances from Kyiv that the sea passage would not be used to conduct attacks.

Russia declared last week that it was pulling out of a previously-established deal, accusing Ukraine of using vessels passing through the Black Sea to launch drone attacks on Russian naval forces, prompting fears that countries in Africa and the Middle East may suffer disproportionately from food shortages.

Ukraine had managed to continue exporting grain and other agricultural products via its Black Sea ports despite Russia’s reneging on the deal, sending a record 354,500 tonnes out via cargo ships on October 31, according to the Odesa military administration.

On land, the Russian army has become increasingly reliant on Belarus’s stock of armoured vehicles, according to British intelligence.

In its latest defence intelligence update, the Ministry of Defence said that Russian forces were losing 40 armoured vehicles a day, with the Kremlin’s troops disparagingly referring to them as “aluminium cans”.

“In recent weeks Russia has likely resorted to acquiring at least 100 additional tanks and infantry fighting vehicles from Belarussian stocks,” the MoD said.

“Armoured units and artillery are central to Russia’s way of war; the force in Ukraine is now struggling partially due to difficulties in sourcing both artillery ammunition and sufficient serviceable replacement armoured vehicles.”

There are also reports that Russia continues to evacuate Ukrainians forcibly from the regions around Kherson, as the Kremlin desperately battles to keep its toehold on the western bank of the Dnieper river.

The Centre for Defence Strategies (CDS), a Ukrainian think tank, said that Russian forces looted an art gallery in Nova Kakhovka after ordering the removal of Ukrainian citizens. The troops made away with paintings and sculptures, according to the reports. In the Black Sea resort of Kyrylivka, Russian troops also began dismantling boilers and air conditioners as part of a campaign of looting, according to the CDS.

The plant was reported to be without power, potentially raising the risk of a nuclear meltdown, although it has back-up generators. Both sides have previously accused the other of dangerous attacks near the plant.

Nikolai Patrushev, the secretary of Russia’s National Security Council, claimed today that Ukrainian forces “continue to shell the Zaporizhzhya nuclear power plant with western weapons which could lead to a global catastrophe”.

Patrushev, a close ally of Putin, added that Russian special services had prevented what he said was a “terrorist attack” on the plant, without providing further evidence.