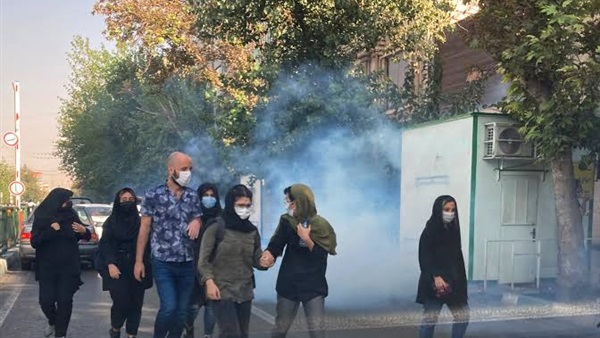 The parents of an Iranian woman who died after being shot while filming protests in her home town have been subjected to a sustained harassment campaign by security forces, a relative has told the Guardian.

Ghazaleh Chalabi, 33, was shot in the head in Amol on 27 September. A commemoration to mark the 40th day since her death – the end of the traditional mourning period in Islam – will be held on Thursday.

Her death was particularly shocking because footage of the protests that she was making on her phone at the time she was shot was conserved and uploaded on social media. Her last words were: “Do not be afraid, do not be afraid.”

An aunt of Chalabi said in an interview that her niece had spent five days in a coma before she died. “She was shot from the front,” the relative said. “There was a small hole in her forehead. The bullet came out from behind her head so that the back of her head had a hole the size of a tangerine.”

The aunt said that while Chalabi was in a coma her parents were repeatedly harassed by security forces who threatened to withhold her body and bury her in an unknown location “if they made a noise”. Security forces also threatened to take retaliatory action against Chalabi’s brother if the parents spoke out and even rejected Chalabi’s wish for her organs to be donated because it would make her seem a martyr, she said.

The threats are typical of the intimidation tactics used by the security services to try to suppress the protests that have gripped the country for weeks since the death in police custody on 16 September of Mahsa Amini.

The protests have posed one of the boldest challenges to Iran’s clerical leaders in decades, gaining increasing traction and frustrating authorities who have tried to put the blame on Iran’s foreign enemies and their “agents” for the unrest, a narrative that few Iranians believe.

Security services have unleashed a fierce crackdown: at least 253 people have been killed, including 34 Iranians under 18, according to one human rights organisation, and several thousand people have been arrested, many taken to special detention centres run by the feared Revolutionary Guards.

On Tuesday university students pressed ahead with sit-down strikes in support of some of the protests, ignoring harsh warnings by elite security forces and a bloody crackdown.

Chalabi’s aunt said her niece had not been a regular participant in rallies and protests before Amini’s death, “but after … she could not be silent”.

On the night of her death, her aunt said, there was a fire in front of the governor’s building.

“Only a few minutes had passed since the fire began when the first aerial shots were fired. Then they [the security forces] started to shoot directly at people,” the aunt said. “Some witnesses told us that she was shot from the roof of the governor’s building. A bullet hit Ghazaleh’s forehead, and she immediately fell to the ground.

“According to a trusted doctor, three or four more people were shot in Amol and died immediately that night. The same night, 300 to 350 people were arrested.

“Many people witnessed the moment when Ghazaleh was shot.”

Some protesters have called on western governments to apply sanctions to the chiefs of police in provincial towns where verifiable killings have occurred. The value of sanctions such as asset freezes and travel bans is disputed since many Iranian security officials have no assets abroad and no intention of travelling to the west.

Chalabi, who had a bachelor’s degree in banking, was close to her 34th birthday when she died. In her spare time, she loved mountaineering, or searching out new novels. Her aunt said she loved friends and had a passion for life. As well as her brother, she leaves behind her mother, who works for a charity association for cancer patients, and her father, a municipal employee.

In preparation for Thursday’s 40-day commemoration, Ghazaleh’s brother wrote of his “beautiful sister”, saying: “Even after 40 years have passed I won’t be able to believe that you’ve gone.”

A close friend of the family said: “During the last week of her life, she kept sending photos from the protests on the streets to her friends and family. She was sending pictures of herself while no longer wearing a headscarf.

“In the last days of her life, she was talking to people everywhere on the street about these protests. She encouraged everyone not to be silent. She had become fearless, more than ever in her life. There was something in her eyes as if she wanted to show and reproduce her courage.

“There were a lot of plainclothes officers at her burial, and they were filming people to scare them. So far, the intelligence service has summoned her family members and threatened them over the phone.”