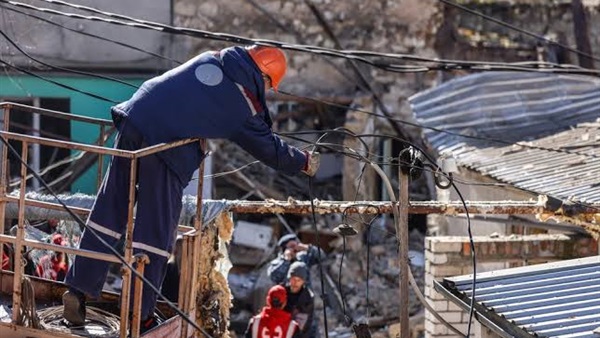 Ukraine’s Western allies must urgently speed up delivery of air defence missiles, and drones to protect energy infrastructure, a top adviser to President Zelensky has said, warning if they did not “our partners will watch us die from cold live on TV”.

Speaking to The Independent in the capital Kyiv, Mykhailo Podolyak, a senior Ukrainian adviser and a chief negotiator, said that Russia had one aim: “to destroy the civilian population of Ukraine” by making them freeze to death.

“We don’t want our partners to watch us dying from the cold live on TV. And we don’t want them to see what else Russia will do to destroy the civilian population of Ukraine,” he said.

“The political elites of our partner countries should make their consensus decision. [They must] transfer as quickly as possible everything they have of defensive weapons so that Russia does not kill the citizens of Ukraine by freezing them to death.

“We want our partners to understand that the Russian Federation is simply killing our people en masse.”

He added that even with a change in government in the UK, which has cycled through three prime ministers in just a few months, Ukraine expected “sincere, comprehensive and maximum support from the new British government” as it was “extremely advantageous for both Ukraine and Britain”.

His statement came after sustained daily attacks by Moscow on Ukraine’s energy infrastructure. Previously, Kyiv has accused Russia of committing “energy genocide” by bombing nearly half of Ukraine’s power infrastructure and claimed the damage could spark Europe’s worst humanitarian catastrophe since the Second World War.

Energy minister German Galushchenko has said at least 40 per cent of Ukraine’s total energy infrastructure has been damaged, including massive destruction to green generation facilities.

Vitali Klitschko, the mayor of Kyiv, said 80 percent of residents of the capital, a city of three million, had been left without water, and local authorities said 350,000 homes in the capital were without electricity. By Monday evening, workers had reduced that number to 270,000.

On Tuesday, the Ukrainian president Volodymyr Zelensky spoke to the French president Emmanuel Macron about restoring damage to energy infrastructure. Mr Macron said Paris would help Ukraine get through the impending winter.

Rights groups, including Amnesty International, have said that Russia’s attacks on energy infrastructure are a war crime.

Amnesty’s Marie Struthers said “the morale of the civilian population is not a lawful target”, adding that carrying out these attacks “with the sole purpose of terrorising civilians is a war crime”.

Monday’s barrage came after Russia accused Ukraine of launching a wave of drone strikes on Saturday against its Black Sea fleet, ships which are docked at a port in Crimea, which Vladimir Putin illegally annexed in 2014.

In retaliation, Moscow announced it was halting its participation in a UN and Turkey-brokered grain deal, which opened a vital export corridor allowing Ukraine to ship millions of tonnes of grain trapped in the country, helping bring down global food prices and to stave off world hunger.

However, despite Moscow’s suspension of its participation in the agreement, 12 ships still left Ukraine on Monday carrying a record volume of 354,500 tonnes of agricultural products, according to the military administration of Odesa.

The ships that sailed on Monday included one hired by the UN World Food Programme (WFP) to bring 40,000 tonnes of grain to drought-hit Africa.

Mr Podolyak said that Ukraine would keep exporting but warned the grain deal was “doomed from the start” as he said Russia had no interest in agreements or real peace negotiations.

“This speaks clearly about Russia’s intentions. And this speaks to the war that Russia is waging against Ukraine and why it is impossible to come to an agreement,” he said.

“Russia’s withdrawal from accords with Turkey and the UN proves once again that her words and promises are not worth the paper they are written on. Moscow has once again shown that they don’t care about food security.”

The top adviser said that if Ukraine’s partners did not act then they would “watch how Ukraine simultaneously dies and wins this war”.

“We have already made all the decisions for ourselves, we will liberate our territory. Russia has made a decision to attack civilian targets en masse. Now the civilised world must decide to say fewer words but provide everything that Ukraine needs as soon as possible.”