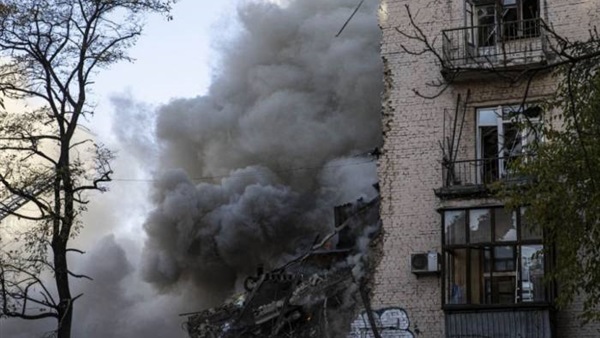 A fresh wave of Russian missile strikes was reported across Ukraine this morning, causing cuts to power and water supplies, including in the capital Kyiv.

More than 50 cruise missiles were claimed to have been fired in “massive” strikes that led to air raid sirens sounding in every part of the country, according to the Ukrainian authorities.

At least five explosions were heard in the city just after 8am local time, affecting electricity and water in some areas, Vitali Klitschko, the mayor of Kyiv, said. He said an energy facility “that powers about 350,000 apartments in Kyiv” was damaged. There were no reports of casualties.

“As a result of strikes on critical infrastructure facilities, part of the capital was cut off. There is no water supply in some areas,” he said. Klitschko added that 80 per cent of Kyiv’s residents remain without water supply. He said in a message to residents: “Just in case, we ask you to stock up on water from the nearest pumps and points of sale.”

He said that engineers and emergency services “are doing everything possible to stabilise the situation as soon as possible”.

In the northeastern city of Kharkiv, critical infrastructure facilities were also hit, the local authorities said, as Russia once more intensified its bombardment of infrastructure.

Missile strikes were also reported in the central Vinnytsia region, as well as Dnipropetrovsk and Zaporizhzhia in the southeast, and Lviv in the west. Residents in the affected regions were advised to remain in shelters.

The strikes came two days after Russia accused Ukraine of a drone attack against Russia’s Black Sea fleet off the coast of the annexed Crimean peninsula. It claimed Britain had trained the Ukrainian soldiers who it said carried out the strikes.

The government in Kyiv has imposed limits on electricity use across the country in recent weeks after the Kremlin’s missile and drone attacks targeted the national power grid and major cities after an attack on the Kerch bridge linking Crimea to Russia, which Moscow also blamed on Ukraine.

Ukraine has neither confirmed nor denied carrying out the attacks, but the UK defence ministry said Russia was “peddling false claims on an epic scale”.

According to Yuriy Ihnat, spokesman for Ukraine’s air force, Russia had used its strategic bombers to carry out this morning’s strikes.

“From 7am on October 31, Russian occupiers carried out several waves of missile attacks against critical infrastructure in Ukraine,” the Ukrainian army said on Telegram, adding that “more than 50 X-101/X-555 cruise missiles were launched” from Russia.

“Dont justify these attacks by calling them a response. Russia does this because it still has the missiles and the will to kill Ukrainians.”

Oleh Synyehubov, the governor of Kharkiv region, said several locations in the northeastern area had been shelled in the past 24 hours before attacks today on the regional capital, which was Ukraine’s second biggest city before the war.

“Today at approximately 8am, the enemy launched rocket attacks on Kharkiv and Chuguyiv district. Critical infrastructure facilities were damaged. Therefore, light interruptions [in power] are possible. There are no casualties at the moment, all services are working at the sites of the hits,” he said.

The city of Kupyansk, the village of Dvorichna, and the community of Vovchan were also bombarded by Russian forces, causing fires and damaging houses and commercial buildings, according to Synyehubov.

The Regional Center of Emergency Medical Assistance said a boy, 16, was injured and taken to hospital in the Izyum district, west of Kyiv, yesterday.

Moscow has announced it is suspending its participation in an UN-brokered deal to allow safe passage of ships carrying grain from Ukraine which was due to be renewed on November 19.

However, according to a marine traffic website, two cargo ships loaded with grain and other agricultural products left Ukrainian ports this morning.

The ships, Admiral de Ribas and Mount Baker are two of 12 vessels due to leave Ukrainian ports today according to the Joint Co-ordination Centre that has been overseeing the agreement.

The July deal to allow grain exports signed between Russia and Ukraine, and brokered by Turkey and the United Nations, is critical to easing the global food crisis caused by the conflict.

The agreement established a corridor through which vessels could travel to Istanbul for inspections. It has allowed more than nine million tonnes of Ukrainian grain to be exported.

Many of the “several thousand” newly mobilised soldiers Russia has deployed to the front line in Ukraine in recent weeks are “poorly equipped”, possibly with arms in a “barely usable” condition, British defence intelligence analysts believe.

The Kremlin raised the stakes in the conflict by declaring a partial mobilisation of up to 300,000 reservists in September, but an update from the Ministry of Defence suggests they may be using weapons dating back to the 1950s, as Moscow struggles with “strained logistics systems”.