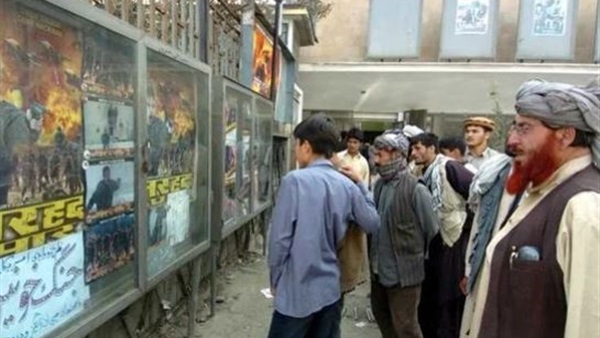 Afghanistan’s cinemas were closed and movie reels burnt in public during the infamous repression of the 1990s. But the current Taliban government appears to have realised the power of cinema as propaganda, commandeering top positions in the film industry and producing slick documentaries about the abuses of the West.

Since sweeping back to power in Kabul last year, the Taliban, who once condemned most forms of public entertainment, are still destroying media they consider un-islamic. Yet instead of proscribing the state-run film company, founded in 1968, they seek to use it for their own ends.

“The Afghan Film Organisation is the only governmental entity that has the ability to show Afghan culture to the world,” Jawad Afghan, 29, said of the company he now leads.

“The [Taliban’s] change in attitude is because the international community shared fake news, so the Islamic Emirate began documenting events through video to show who the real human rights defenders are.”

Countering the country’s image as reported by Western media is at the core of conversations with the Taliban, who still seek international and diplomatic recognition for their regime.

Until the group’s takeover last year, the AFO was led by a woman: Sahraa Karimi. She has a doctorate in cinema and has directed 30 short films films, three documentaries and one fiction feature. Before fleeing Afghanistan last August with her family, she published an open letter to the international film community, calling on it to protect filmmakers and writers from Taliban violence. The letter, published under the letterhead of the AFO, described the horrors already taking place under the newly re-established regimeTaliban, calling it “a humanitarian crisis”.

By contrast, Jawad Afghan’s background is within the culture ministry. But the power of film is not lost on him, and he has directed a documentary about the US treatment of Afghan detainees at Bagram prison.

Senior Taliban and al-Qaeda figures were detained there, along with ordinary farmers, vendors, students and Taliban sympathisers previously considered a threat to security. But all were released after the group’s takeover last year.

The AFO and the Ministry of Information and Culture held a screening of the documentary in September. Stories of torture and abuse were rife inside the jail, and the film focuses on this, laying the blame on US and Afghan soldiers. Interviewees include the Taliban government spokesman Zabihullah Mujahid and the current Kabul intelligence official Farooq Farooqi.

Afghan said he hopes to attract global viewers for his work. But the Taliban continue to ban foreign films and heavily censor the country’s media. Any work deemed by the group to be in breach of Islam is destroyed.

Much of the AFO’s historic archive was ransacked before the US-led invasion, although some staff members saved valuable films by risking their own lives. Modern Afghan filmmakers whose work is critical of the Taliban also fear reprisals. Faisal Jamalyar’s 2017 drama The Bird Was Not a Bird has been shown at film festivals around the globe. But the director rarely leaves his house since the change in government, fearing reprisals for the film, in which the story is told of a man subjected to Taliban indoctrination.

With the country’s fledgling film industry hit by restrictions and an exodus overseas of talent, there is little to show on screens, so cinemas have remained closed. Permission is granted for filming to take place in public places, say members of the film industry who remain. However, at the end of August a week-long independent Afghan film festival, Did-Naw – translated to ‘New Look’ – was held in Kabul’s main movie theatre, Ariana Cinema, showing dozens of films. Although the topics were restricted by the Taliban, the Best Film award was given to the only female entrant, Atefah Mohammadi, 20, with her seven-minute short that aimed to humanise drug addicts.

“The Islamic Emirate is not trying to eliminate the film industry,” declared Qari Wali Gul Jawad, 38, head of cultural affairs for the Kabul Municipality.

But it is clear a shift in the meaning of Afghan cinema is under way, with the big screens set to become mostly a vehicle for Taliban propaganda.

“Unfortunately, for the past 20 years things were being published and aired that were against our culture,” Jawad added. “We are going to start again to rebuild our culture and values. We have programmes planned to keep the cinema open as a place of education.”